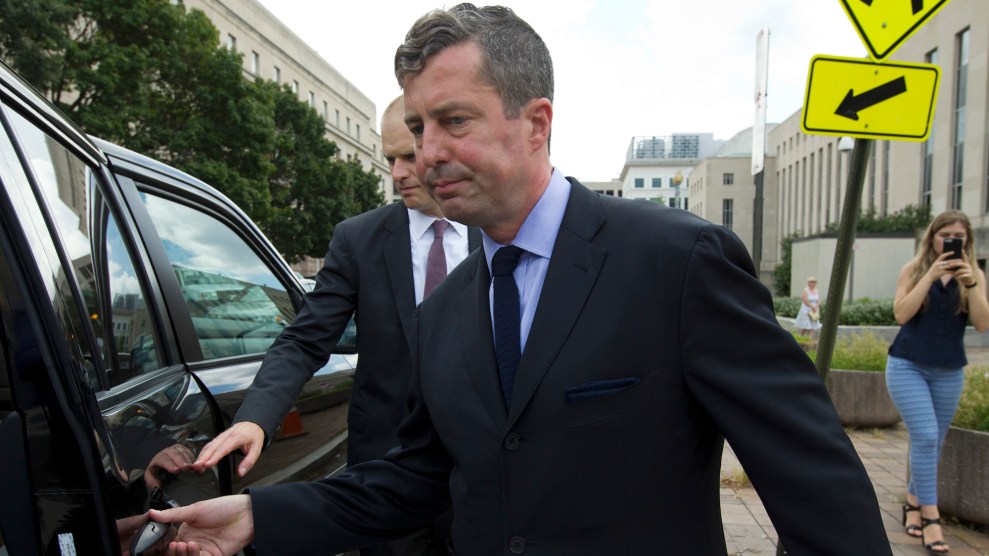 Facts matter: Sign up for the free Mother Jones Daily newsletter. Support our nonprofit reporting. Subscribe to our print magazine.
Samuel Patten, a Republican operative with ties to ex-Trump campaign manager Paul Manafort and defunct data firm Cambridge Analytica, pleaded guilty Friday in Washington, DC, to illegal foreign lobbying and agreed to cooperate with prosecutors.
Patten was charged by the US Attorney’s Office in Washington, DC, and the Justice Department’s National Security Division, not special counsel Robert Mueller. But Patten’s case, referred by Mueller, represents the latest development in the broadening investigation by federal officials into foreign influence activities in the United States.
A court document filed ahead of Patten’s plea says that between 2014 and 2018 he worked in Washington for the Opposition Bloc, the successor party to Ukraine’s Party of Regions, the pro-Russian party that Manafort once represented. The Opposition Bloc paid Patten more than $1 million for his work during that period, which included lobbying Congress and promoting the party, but he never registered as a foreign agent with the Justice Department.
Prosecutors say Patten also drafted an op-ed for an Opposition Bloc official. Though he is not named in the filing, the official seems to be Serhiy Lyovochkin, an Opposition Bloc lawmaker credited as the author of a February 6 op-ed in US News and World Report titled “Ukraine Can Win in the Trump Age.” Lyovochkin is the former chief of staff to Viktor Yanukovych, the pro-Russian former Ukrainian president who was Manafort’s main patron in Kiev. Lyovochkin is also reportedly the business partner of Dmitry Firtash, an energy magnate that US prosecutors are attempting to extradite from Austria on charges he bribed officials in India to obtain mining rights. Firtash disputes the charges.
In 2015, Patten launched a firm called Begemot Ventures International with Konstantin Kilimnik, a Russian who long worked for Manafort in Kiev. The firm’s website says it offers strategic and political advice to clients. Manafort was convicted of federal tax and bank fraud earlier this month. He faces another trial in September on charges he engaged in illegal foreign lobbying for the Party of Regions.
Kilimnik, who is reportedly living in Moscow, was indicted in June by Mueller on obstruction of justice charges for allegedly helping Manafort try to influence witness testimony. Prosecutors say Kilimnik has ties to Russian intelligence, a claim he has denied. In a filing connected to the case, prosecutors noted that Rick Gates, Manafort’s former partner who has pleaded guilty to two felony charges and cooperated with Mueller, told an associate that Kilimnik is a former officer in the GRU, Russia’s military intelligence branch. Patten and Kilimnik reportedly worked together in Moscow between 2001 and 2003. Mueller has charged a dozen GRU officials with hacking Democratic groups and members of Hillary Clinton’s campaign team, then disseminating damaging emails in a bid to help Donald Trump’s presidential campaign.
As part of his plea deal, Patten admitted to lying to the Senate Intelligence Committee in a January 2018 interview. The committee is investigating Russian interference in the 2016 presidential election. Patten also admitted that he arranged for an unnamed American straw donor to pay $50,000 for four tickets to Trump’s 2017 inauguration for a Ukrainian official, who matches Lyovochkin’s description. The payment circumvented a ban on foreign donations to the inaugural committee. Patten secretly reimbursed the straw purchaser for the tickets, and was himself reimbursed for the purchase by the Ukrainian through a Cypriot bank account, according to a statement of offense that Patten stipulated was correct. The filing says Patten’s business partner also received one of the inauguration tickets. That business partner seems to be Kilimnik, whose presence at the inauguration has not previously been reported.
Patten has also worked with Cambridge Analytica, the controversial data operation that claimed it helped engineer Trump’s presidential victory—and which imploded earlier this year following news it improperly harvested data on millions of Americans from Facebook. Patten worked for Cambridge Analytica’s parent company in 2014, helping the firm hone its data targeting, the Daily Beast reported in April. Patten has also worked in the State Department under President George W. Bush and as a Senate staffer, according to his online biography.

Read the Statement of Offense that Patten agreed to:

Read the Criminal Information regarding Patten: