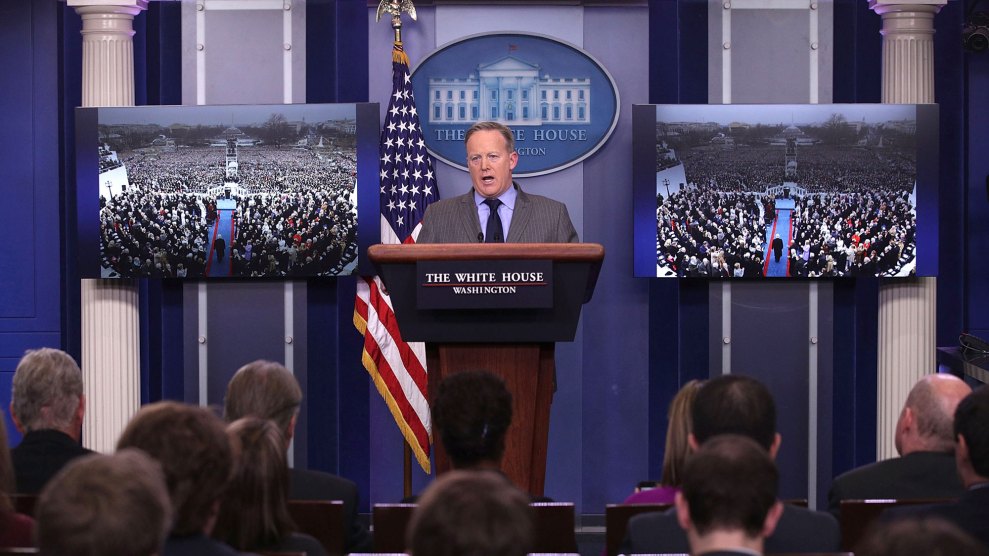 White House Press Secretary Sean Spicer makes a statement during his first press conference as Press Secretary where he spoke about the media's reporting on the inauguration's crowd size. Alex Wong/Getty Images

Shortly after his inauguration, President Donald Trump boasted about the size of the crowds in attendance, and then-press secretary Sean Spicer, in his first press conference, sided with his boss and insisted that it had been “the largest audience ever to witness an inauguration, period.”

This wasn’t true, of course, but a government photographer did his best to make it seem like it was.

Newly released documents obtained by the Guardian show that a National Park Service photographer, following a request from the White House, cropped the official photographs to remove empty space where the crowds ended. The documents were produced as part of an Interior Department inspector general’s investigation, but the details about the edited photos were not included in the final report, released last June.

The photographer “said he believed that was what [redacted] wanted him to do.”

On his first day of office, Trump called then-acting NPS director Michael Reynolds at 9:30 a.m. and “asked him to provide pictures of the inauguration,” Reynolds reportedly told investigators. Spicer also repeatedly called the NPS officials that day, leading a staffer to acknowledge that Spicer had asked “for NPS to provide photographs in which it appeared the inauguration crowd filled the majority of the space in the photograph,” according to CNN.

According to investigators’ notes, the message was relayed to Interior officials, including two NPS photographers who worked the inauguration. Investigators indicated that an unnamed NPS communications official “got the impression that President Trump wanted to see pictures that appeared to depict more spectators in the crowd.”

By that point, photos had circulated comparing the crowds at Trump’s inauguration to those attending President Barack Obama’s. The communications official noted that the Trump photos in the media “showed a lot of empty areas.” “She assumed that the pictures the White House was asking for needed to be cropped to show more of the crowd present at the event, but acknowledged that Reynolds did not ask for this,” according to CNN, which cited the investigators’ notes.

Following the White House request for additional photographs, a NPS photographer cropped the photos, and later told investigators he “did so to show that there had been more of a crowd.”

“He said he believed that was what [redacted] wanted him to do. He said [redacted] had not specifically asked him to crop the photographs to show more of a crowd,” according to the notes.