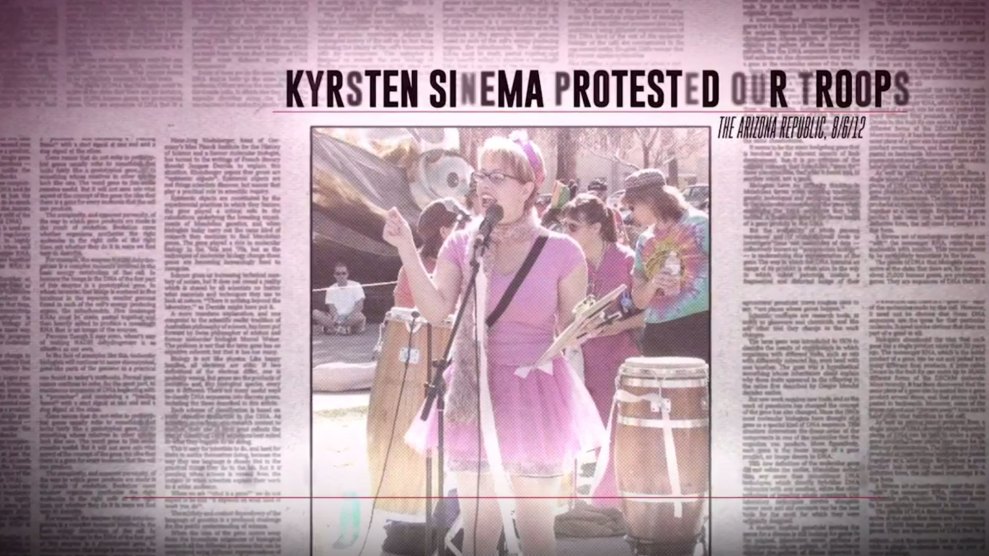 Democrat Kyrsten Sinema and Republican Martha McSally, both current members of Congress, are locked in a tight contest in the race to succeed retiring Arizona GOP Sen. Jeff Flake. McSally, who touts the endorsement of President Donald Trump despite refusing to say whether she voted for him, has represented a Tucson-area seat since 2014, and long before that was the first woman ever to fly combat missions as an Air Force fighter pilot. Sinema has grown increasingly conservative since coming to Congress in 2012, but she got her start in Arizona politics as a Green Party spokesperson and vocal anti-war activist.

There’s not quite as much daylight between these two candidates as there is in some other marquee Senate races—think Beto O’Rourke vs Ted Cruz—but McSally wants to exploit one key difference: her military service. You needn’t look any further than this campaign ad, which dropped late last week, attacking her Democratic opponent for having demonstrated against the wars in Iraq and Afghanistan.

“While I was overseas fighting terrorism, Kyrsten Sinema was protesting my service,” says the ad’s star, retired Army sergeant Marco De Leon. He’s referring to Sinema’s vocal opposition to the war back in Phoenix, where she was a part of a group called Women in Black.

The group, whose members dressed all in black, met for an hour of silent anti-war protest every Wednesday outside a public library. Sinema wrote letters to newspaper editors opposing the war in Iraq and even flew to Miami for a march against the war in November of 2003. When she first ran for Congress in 2012, her Republican opponent, Vernon Parker, seized on a first-person account she’d written of that protest, in which she talked of “singing and spiraling” in a pagan prayer circle as rubber bullets sailed past.

This isn’t the first such attack against Sinema and this cycle; it’s very much at the heart of the Republican’s campaign. McSally put out an even more direct contrast ad in August in which she accused Sinema of “denigrating” servicemembers:

But Sinema and her allies were never protesting Marco De Leon, or for that matter, Martha McSally. They were protesting President George W. Bush’s decision to send people like De Leon into combat. And pagan prayer circle or no, Sinema has been proven right. The invasion of Afghanistan is two weeks away from being old enough to enlist to fight in the War in Afghanistan, and the War in Iraq has gone down as the biggest foreign policy disaster of the last half century.

Even Trump, whose endorsement McSally has touted ad nauseum throughout the primary, ran for president in part on the idea that the Iraq War was a huge mistake. The idea that people who opposed the wars simply didn’t like the troops was a popular, if baseless, smear back in 2003.

But it sounds especially bizarre now.