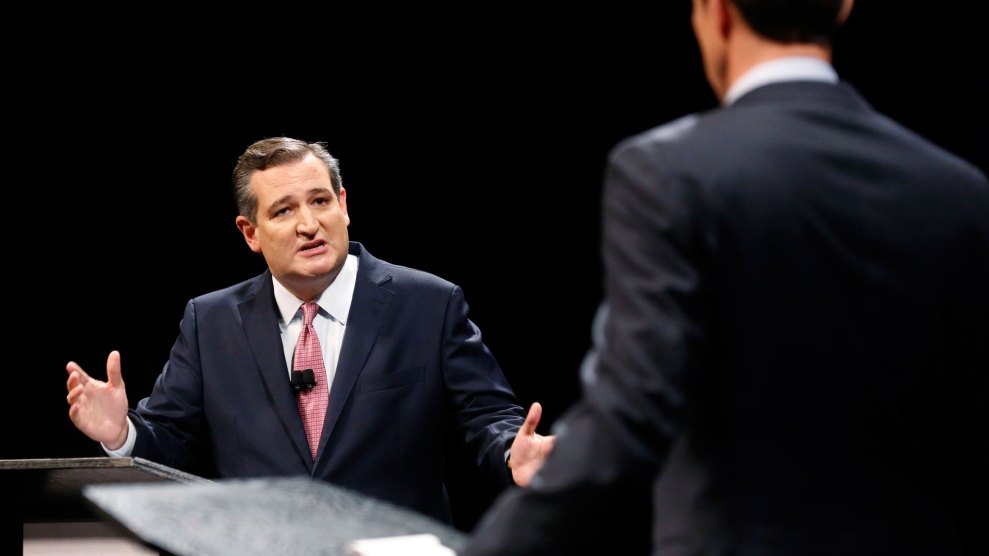 Texas Republican Sen. Ted Cruz has long characterized his re-election campaign against Democratic candidate Rep. Beto O’Rourke as a choice between very distinct governing philosophies, and no one who watched their first debate on Friday would dispute it. They disagreed on everything, and those disagreements were meaningful. The two represent perhaps the clearest divide on ideology and personality that you could find in any competitive race in the country this year. (A few candidates in Georgia and Florida may beg to differ.)

Nowhere were those differences clearer than when the subject turned to policing. Moderators from the Dallas Morning News and NBC’s Dallas-Fort Worth affiliate devoted extensive time to comments each has made on the criminal justice system. The candidates’ answers were not just the story of the race but of two divergent political movements.

The relevant exchange began about 10 minutes into the debate, when Cruz was asked about his comments earlier in the week about Botham Jean, a black man who was shot and killed in his own apartment earlier this month, by an off-duty Dallas police officer who had invaded his home thinking it was hers.

At a Dallas church last week, O’Rourke said that the officer, Amber Guyger, should be fired and lamented that officers investigating the case had searched the victim’s house for drugs. Cruz instead cautioned against a rush to judgment and accused O’Rourke of reflexively blaming cops, stating that comments like those O’Rourke had made had led to acts of violence against law enforcement.

As Cruz was delivering his punches on stage, his campaign staff blasted out the purportedly damning evidence. It could have been sent out by O’Rourke’s own campaign—because it’s tough, on several watchings, to figure out what exactly is supposed to be wrong with it:

He began rattling off a list of incidents of violence against police officers, some of whom, he said, were in attendance at the debate. In other words, Cruz had come prepared to turn the shooting death of unarmed black man in his own home by a white police officer into a political attack “Let me say I think it is offensive to call police officers modern-day Jim Crow. That is not Texas.”

Cruz was referring to another speech O’Rourke gave last week, during a visit to the historically black Prairie View A&M University. It’s worth watching in full, but as it picks up, O’Rourke is discussing the rise of convict labor in the 19th century following the abolition of slavery:

[T]hey see evidence of muscles literally torn from the bone, people being worked to death in these convict chain gangs, people who became convicts solely by tint of the color of their skin, in a system that was radically unjust, following what we thought was the end of that injustice at the end of the Civil War.

When confronted at the debate by the attacks from Cruz, O’Rourke didn’t back down. He mentioned his uncle, an El Paso sheriff’s deputy who “taught me to shoot,” and then returned to the point he’d been making on the tape. “We’ve got to do something than what we’ve been doing so far,” he said. “If African-Americans represent 13 percent of the population but they represent one third of those who are shot by law enforcement we have something wrong. If we have the largest prison population on the face of the planet and it is disproportionately comprised of people of color, we have something wrong in this country. Republicans and Democrats should be able to work together with law enforcement and people in the community for real, lasting, meaningful criminal justice reform.”

The moderators moved on, but the candidates weren’t done. O’Rourke was then asked about his comments in defense of Colin Kaepernick, who has been blacklisted by the NFL for kneeling during the national anthem in protest of police brutality. Just as he did during his viral remarks at a town hall in Houston last month, O’Rourke invoked the civil rights struggle, arguing that demonstrators were striving to ensure the rights of all Americans.

Cruz’s response sounded like something disgraced conservative commentator Dinesh D’Souza might have written. “I’ll tell you, one of the reasons that I’m a Republican is because civil rights legislation was passed with the overwhelming support of Republicans,” he said. “And indeed the Dixiecrats who were imposing Jim Crow, the Dixiecrats who were beating those protesters, were Democrats. And that’s one of the reasons I’m proud to be a member of the party of Lincoln, a member of the party that stands for equal rights for everyone regardless of what race, what ethnicity, every human being is a creation of God that our Constitution protects.”

He had more to say: “I’ll tell you, those civil rights protesters would be astonished if the protests were manifesting in burning the flag. Dr. King—that’s not something Dr. King stood for, he stood for justice without disrespecting the men and women who fight for this country.”

Perhaps one reason why a Democrat is doing so well in Texas this year is that Cruz has an ability to trigger even the most faulty of bullshit detectors. Cruz became a Republican because his father was an anti-communist political refugee who worked to elect Ronald Reagan and enrolled his son in a program to memorize the Constitution. The senator’s first ever political donation was to the white supremacist Jesse Helms—not because Helms was an ardent defender of civil rights but because his unwashed bigotry made some Democrats really angry. Cruz was 10 when he made the donation; he was 42 when he bragged about it.

Cruz, a former Supreme Court litigator, is a highly intelligent United States senator who knows what words mean, and the fact that he is choosing to say things like this, rather than talking ad nauseam about Obamacare (as he once did) or touting his support for tax reform (a central Republican policy goal of the last decade) says a lot about where the race stands. But it says even more than that.

Friday’s exchange on criminal justice reform, and the statements that triggered it, offers perhaps the single clearest distillation of what has happened to the two major parties since the rise of Trump. On the Left, the resurgence of white nationalism and the collapse of Democratic governance have forced a rhetorical and ideological sharpening. The anxiety and frustration of the moment has placed a new urgency on describing the world in the clearest terms possible—historically, culturally, economically, racially, and loudly—and responding to those conditions with new solutions. When O’Rourke describes the criminal justice system as “the new Jim Crow,” he is channeling most immediately the writer Michelle Alexander, the author of the book by exactly that name. More broadly, he is articulating the sentiments of rank-and-file voters and non-voters, and of a vigorous intellectual conversation on the Left. O’Rourke’s comments in Dallas about Botham Jean, at Prairie View about Jim Crow, and in Houston about Kaepernick, are all a reflection of this moment.

The right is not in the midst of an awakening. Trumpism has left little room for self-examination or growth. Instead, the former intellectual titan of the insurgent right is insisting that Blue Lives Matter about a woman who invaded her neighbor’s home and shot him dead.