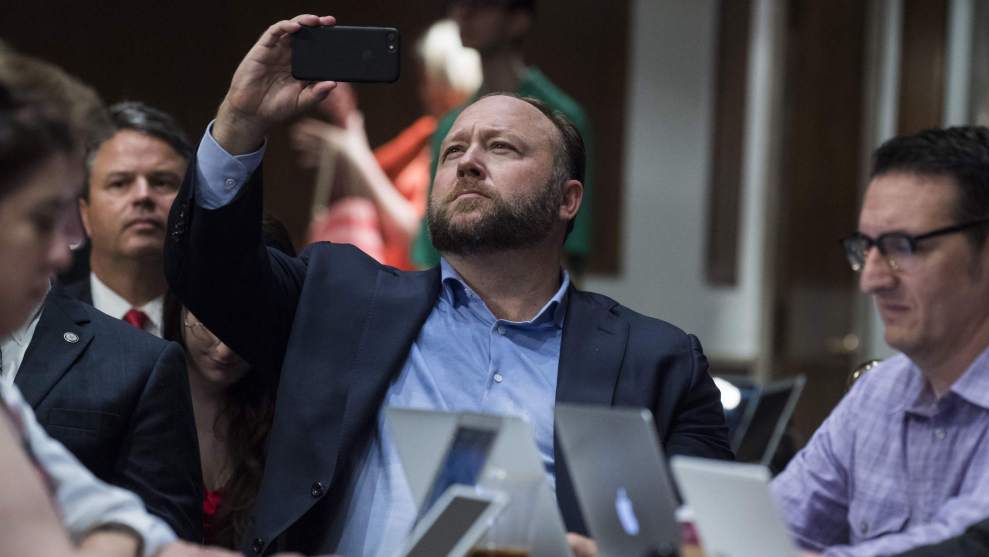 Twitter has permanently banned right-wing conspiracy theorist Alex Jones, along with the official account of his website Infowars, the social media company announced Thursday. The action came a day after Jones posted a video taken outside of a congressional hearing where he berated CNN reporter Oliver Darcy, mocking his appearance and calling him “fake news.” That same day, Jones had accosted Sen. Marco Rubio (R-Fla.) during a break of the Senate Intelligence Committee hearings where Twitter CEO Jack Dorsey and Facebook COO Sheryl Sandberg testified.

Twitter said the actions by Jones and Infowars on both Twitter and Periscope, the live-streaming app owned by Twitter, on Wednesday violated its abusive behavior policy. Twitter said it would also “continue to evaluate reports we receive regarding other accounts potentially associated with @realalexjones or @infowars and will take action if content that violates our rules is reported or if other accounts are utilized in an attempt to circumvent their ban.”

Today, we permanently suspended @realalexjones and @infowars from Twitter and Periscope. We took this action based on new reports of Tweets and videos posted yesterday that violate our abusive behavior policy, in addition to the accounts’ past violations. https://t.co/gckzUAV8GL

Before Thursday, Twitter had temporarily suspended Jones from the platform for his incendiary tweets. Both Facebook and YouTube have already banned his content after pressure from activist groups and lawmakers. Jones is best known for promoting conspiracy theories. He has called the parents of children murdered at Sandy Hook Elementary School and survivors of the Parkland shooting “crisis actors.”

Jones’ verbal attack on Darcy, which was witness by Mother Jones, appeared to be motivated by the reporter’s history of providing Twitter with tweets by Jones and Infowars that were in clear violation of the sites terms of service.

Jones is not the first right-wing figure to be banned from the social-networking platform. In May 2015, the site banned former Breitbart reporter Chuck Johnson after he appeared to be soliciting donations to “take out” civil rights activist DeRay Mckesson. A year later, it banned right-wing provocateur Milo Yiannopoulos for leading a harassment campaign against actress Leslie Jones.

In addition to Alex Jones, both Johnson and former Project Veritas member Laura Loomer attended yesterday’s House hearing on political bias in social media. Loomer was escorted out of the hearing by police after interrupting the hearing, accusing Twitter of coordinating the suppression of conservatives ahead of the midterm elections.

But in front of Congress, Twitter CEO Jack Dorsey vehemently denied that the site discriminated based on “political ideology.” Conservatives had accused Twitter of “shadow banning” them by suppressing their accounts in search results. Dorsey said there had been no shadow ban and that any suppressed search results were due to a technical error that affected 600,000 users.