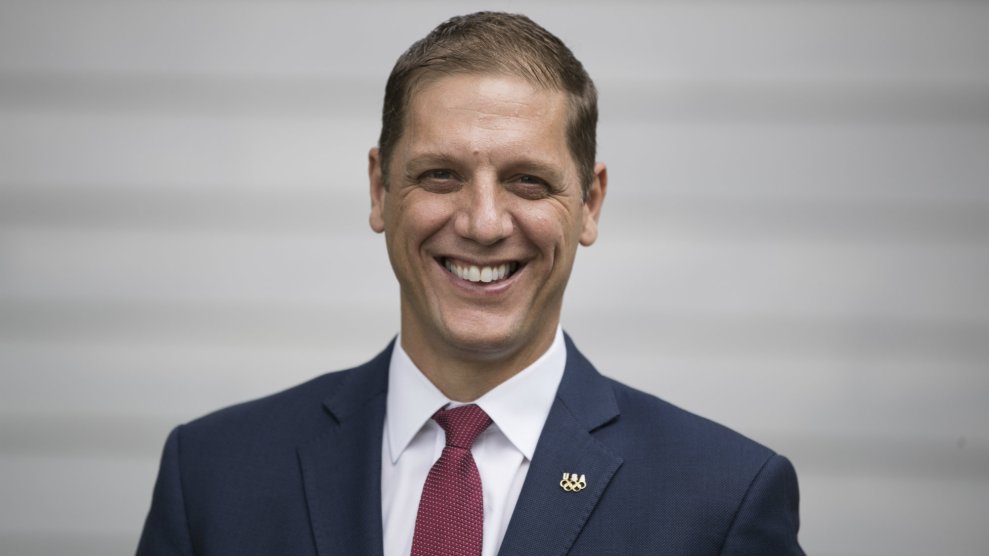 The fight to fill an open congressional seat in eastern Pennsylvania took another nasty turn this week when Republican candidate Marty Nothstein sued the Allentown Morning Call over the newspaper’s reporting on an allegation that Nothstein engaged in sexual misconduct nearly two decades ago.

The lawsuit accused the Morning Call of conspiring with the president of a track cycling arena in Lehigh Valley to hurt Nothstein’s chances in the congressional election by publicizing the accusation. Few details have emerged about the alleged incident, though Nothstein has vehemently denied engaging in any misconduct and says an investigation cleared him of wrongdoing.

Nothstein, a former Olympic gold medalist in track cycling, faces Democrat Susan Wild in a closely watched battle for the seat vacated this year by Republican Charlie Dent. Nothstein was placed on leave earlier this year from his position as executive director of the Valley Preferred Cycling Center—a nonprofit that runs the cycling venue just outside of Allentown—after board members at the center learned that a separate organization was investigating him for sexual misconduct. Part of the suit accuses Valley Preferred of wrongfully terminating Nothstein in February. The velodrome posted an online job listing over the summer for a new executive director.

The Morning Call, which in August published a story about the controversy, obtained an internal email that had been sent by Andrew Ralston, then the president of Valley Preferred. In the email, Ralston said the alleged misconduct may have occurred at the cycling center around 2000, the same year Nothstein won his gold medal at the Sydney Olympics. Ralston, who is one of the defendants named in the lawsuit, reportedly denied leaking the information. “Every material aspect of this lawsuit against me is completely false. I don’t mean it ‘could be construed as false,’ I mean it’s ‘absolutely and entirely made up out of whole cloth,'” he wrote on Facebook, according to the Morning Call.

Matthew Leish, an attorney for the Morning Call’s parent company, Tribune Publishing, was quoted in the paper Monday as saying, “The Morning Call strongly denies the allegations and stands by its reporting.” He added, “We will respond to the complaint in due course.” Nothstein’s campaign referred a request for comment to Nothstein’s personal attorney, Eric Hall, who did not immediately provide a comment. Wild’s campaign declined to comment.

After news of Nothstein being placed on leave became public in August, he strenuously denied any charge of wrongdoing, calling the report “100 percent false” and a “political hit job” in an interview with the Morning Call. The unspecified accusation against Nothstein was made to USA Cycling, which referred the matter to the US Center for SafeSport, an independent organization that investigates reports of bullying, harassment, and other types of abuse or misconduct within US Olympic sports.

“An anonymous tipster planted a clearly false allegation in hopes of triggering an investigation,” he said in a statement posted to his campaign website. “Tipsters then turned around and planted a story with the media that I was under investigation. These days, that’s all it takes to smear someone.”

A week after the newspaper’s initial report, Nothstein announced that SafeSport had closed the investigation. In a press release, the campaign quoted Michael Henry, SafeSport director of investigations and outcomes, as saying, “The Center has completed its inquiry into those allegations and has determined that, based on the information and evidence currently available, the Center is not proceeding with any further proceedings at this time and the matter is now closed.”

“At this point, I am conferring with my advisors about the next step in this process. This has been a nightmare for me, for my family, and for my campaign staff and I intend to make certain that this injustice is corrected,” Nothstein said in the release.

In a statement to Mother Jones, SafeSport declined to comment, saying, “It’s the Center’s policy to not speak about specific matters.”

In its story Monday about the lawsuit, the Morning Call noted:

The lawsuit also alleges that Nothstein’s representatives offered an affidavit in which the woman at the center of the investigation denied the accusations made to SafeSport, and that the newspaper refused to review it.

The Morning Call previously stated that it declined to view the documents based on the conditions under which they were offered.

The lawsuit contends no conditions were placed on a review of the affidavit, except that the identity of the subjects remain confidential.

After retiring from cycling in 2006, Nothstein entered local politics, eventually becoming chairman of the Lehigh County Board of Commissioners. He remained involved with cycling as executive director of Valley Preferred, where, according to the biography on his campaign website, “he improved the track’s finances,” “expanded training programs for the next generation of young champions,” and “created outreach programs in underserved communities where too many children are forgotten.”

Before retiring from Congress this year, Dent represented Pennsylvania’s 15th District, a moderate conservative bastion that had sent a Republican representative to Washington for nearly two decades. After the state Supreme Court threw out the old map of the Keystone State’s congressional districts in January, the 15th District turned into the much more purple 7th District. A New York Times poll conducted late last month showed Wild leading by 8 percentage points.