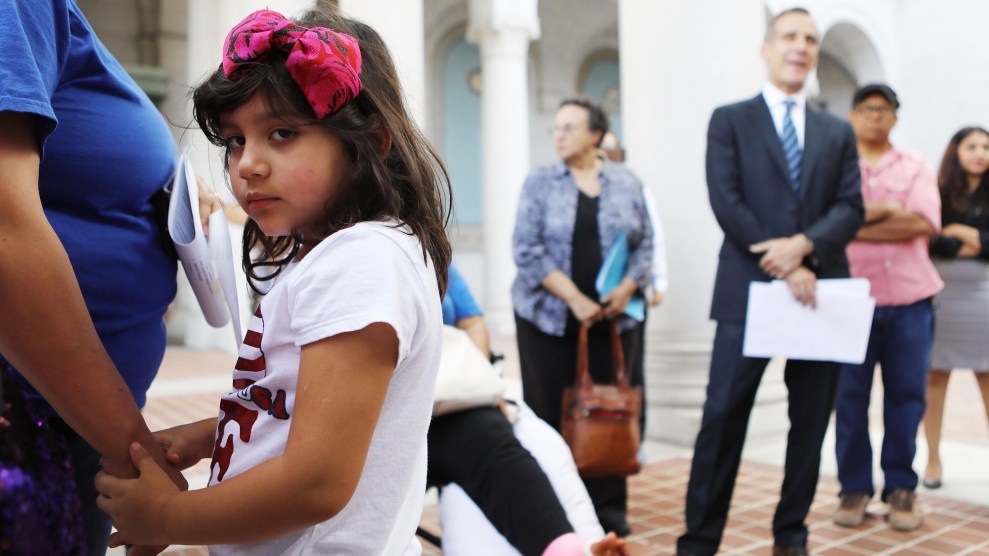 Ariely Murrilo, a U.S. citizen, holds the hand of her mother, a TPS holder from El Salvador, in Los Angeles in August.Mario Tama/Getty

A federal judge has blocked the Trump administration from ending temporary legal status for about 250,000 immigrants from El Salvador, Haiti, Nicaragua, and Sudan. Judge Edward Chen wrote that his decision is based partly on evidence that President Donald Trump is biased against “non-white, non-European immigrants.”

Chen’s temporary injunction stops the Trump administration from ending the countries’ Temporary Protected Status before he makes a final decision in the case. TPS provides temporary work permits to immigrants in the United States whose home countries are recovering from manmade and natural disasters. Sudan’s TPS was set to expire next month, while the other three countries’ will expire next year.

The lawsuit, filed in March by the American Civil Liberties Union of Southern California and the National Day Laborer Organizing Network, argues that the Trump administration’s TPS decisions were improperly influenced by the administration’s “repeatedly-expressed racism toward non-white, non-European people from other countries.”

Chen’s order lists a number of examples of that bias. They include Trump’s call for a Muslim ban during the presidential campaign, his claims in June 2017 that recent immigrants from Haiti “all have AIDS” and that Africans would never “go back to their huts,” and a question he posed in January: “Why are we having all these people from shithole countries come here?”

Ahilan Arulanantham, an ACLU attorney on the case, said in a statement in response to Chen’s order, “If these children’s parents were not from countries the administration considers unworthy of humanity, we would not have to wage this fight. But we do, and we will not relent.” Justice Department spokesman Devin O’Malley said in a statement that the department “completely rejects” claims that the Trump administration “did anything improper.”

Chen emphasized that ending TPS would also affect more than 200,000 American-born children of TPS holders. “Those with U.S.-citizen children will be confronted with the dilemma of either bringing their children with them, giving up their children’s lives in the United States (for many, the only lives they know), or being separated from their children,” he wrote. Crista Ramos, a 14-year-old US citizen who is the lead plaintiff in the case, said in a statement after the decision, “Ever since the TPS terminations were announced, I have been wondering how I can live a normal life if I am about to lose my mom.”

El Salvador, Nicaragua, and Sudan’s TPS designations were routinely renewed under both Republican and Democratic administrations. The roughly 200,000 TPS holders from Nicaragua and El Salvador have been in the United States since at least 2001. Haitian immigrants first gained TPS following the 2010 earthquake that devastated the country. The Trump administration decided to terminate TPS for all four countries, along with Nepal and Honduras.

Chen said the need for a temporary injunction was supported by evidence that the Department of Homeland Security may have made TPS decisions to achieve a “pre-ordained result desired by the White House.” Internal government emails and a deposition from a DHS official who resigned earlier this year show that senior Trump officials were determined to end the temporary protections. They overcame objections from career staffers at DHS and the State Department who argued that conditions in the countries were worse than political staffers were making them out to be.