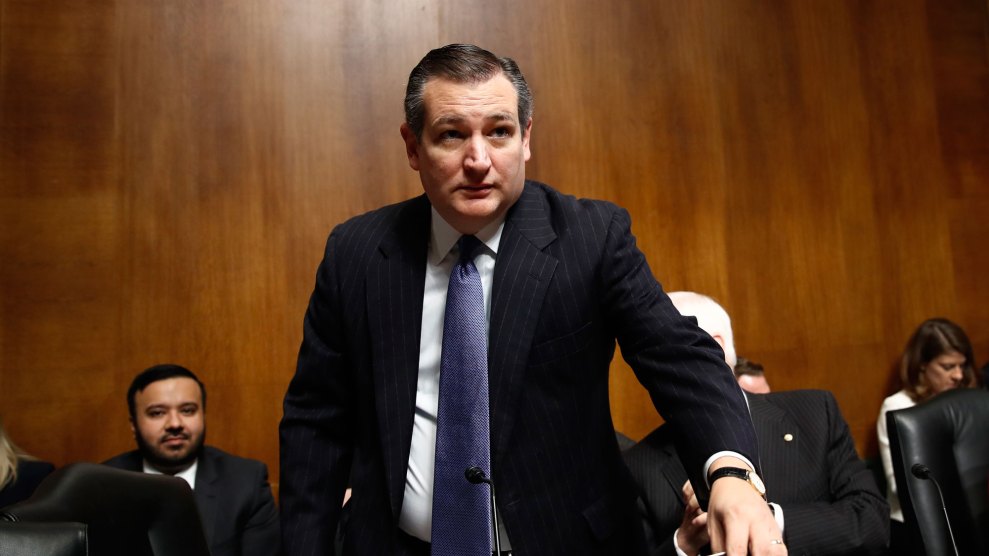 In his underdog Texas Senate race, Democratic Rep. Beto O’Rourke has assembled one of the most prolific small-dollar digital fundraising operations in history. He’s found himself in a single-digit race with Republican Sen. Ted Cruz, in part because he’s managed to bring in the kind of money—from coast to coast, but particularly from the Lone Star State—that wouldn’t look out of place in a presidential primary campaign. On Friday, his campaign announced it had raised a stunning $38 million over the previous three months.

O’Rourke’s overflowing war chest has made Cruz supporters nervous. Last August, a group of donors and Republican operatives formed a super-PAC, Texans Are, to counteract the emerging threat posed by O’Rourke. The group has so far spent more than $2.7 million attacking O’Rourke, accusing the El Paso Democrat of supporting “open borders,” “rolling out the red carpet for illegal immigrants,” and voting against body armor for sheriffs. Another Republican super-PAC, Club for Growth Action, has spent more than $1 million targeting O’Rourke over a downtown redevelopment plan he pushed in El Paso.

The Federal Election Commission only publishes the addresses of donors who donate $200 or more, so it’s difficult to determine where every cent given to O’Rourke came from. But prior to the most recent filing, most of the money he has received above that amount came from Texas. Based on the available FEC filings, O’Rourke actually gets a much greater percentage of his money (and nearly twice as much money overall) from Texans than Cruz does. And he’s done this, as he takes pains to point out, without taking any contributions from political action committees.

But that hasn’t stopped Cruz from making an issue of O’Rourke’s out-of-state donors. The senator often brings up O’Rourke’s fundraisers in New York and Southern California for the same reason Republicans flog O’Rourke’s support among celebrities like Eva Longoria and Khalid—to cast him as a tool of the coastal liberal elite. (Longoria is from Corpus Christi; Khalid is from El Paso.)

We've been told that Hollywood is afraid of being outdone by New York after last night's fundraiser, so now they're pulling out all the stops… #TXSen #DontCaliforniaOurTexas pic.twitter.com/Bak8D9sfGW

Beto raising big $$ from Hollywood by supporting NFL protests of the national anthem. But in Texas? Vast majority of Texans stand for the flag, honor our veterans, and support the brave men & women of law enforcement. People can protest without disrespecting the flag. https://t.co/edvin6ButL

With Hollywood celebrities leading the way with Beto, NY liberals don’t wanna be left behind…. https://t.co/0LKVQeg0sF

But Cruz is no stranger to New York City fundraisers himself. He was a regular in the city during his 2016 presidential campaign, even as he was trashing now-President Donald Trump’s “New York values.” The Long Island billionaire Robert Mercer was one of his most important backers, and Cruz made trips to ask for money at such rustic locales as a Central Park South penthouse, Madison Avenue, the Harvard Club, and a Lower Manhattan law firm. He also dropped by a luncheon at the Pacific Club in Newport Beach, California.

If he fends off his Democratic challenger, he’ll owe a lot to some of the richest men—and they are almost all men—living in some of the nation’s richest zip codes. Most of Texans Are’s money comes from Texas. But the super-PAC’s checks have also come from Greenwich, Connecticut, and Corona del Mar, California. Of the 30 individuals and corporations (mostly shell companies, but also the gas station giant Valero) who have filled Texans Are’s coffers, 11 are billionaires.

Here’s a quick guide to who they are and how much they’ve spent:

Richard Uihlein ($450,000): “The biggest Republican megadonor you’ve never heard of,” per Politico. Born into the Schlitz beer fortune, the Illinois-based founder of packaging supplies company U-Line (think cardboard boxes) has frequently backed conservative challengers to the Republican establishment. He gave $7 million to boost Kevin Nicholson in this year’s Wisconsin Republican Senate primary and $2.5 million to back Jeanne Ives’ challenge to Republican Gov. Bruce Rauner—in the end, both were unsuccessful. In 2017, he continued funding a super-PAC backing Alabama Senate candidate Roy Moore even after the former judge was accused of molesting a teenager.

Robert Rowling ($250,000 individually; $250,000 through his company, TRT Holdings): Rowling got his start in the oil business with his father in the 1980s before they sold their company to Texaco. He bought Omni Hotel group in 1996 for $500 million, and left his footprint on the brand by removing X-rated movies from guests’ pay-per-view options and also branching into prestige golf resorts. (TRT also owns Gold’s Gym.) He was previously a huge donor to Karl Rove’s super-PAC, American Crossroads. In 2016, he told the Dallas Morning News he was a conservative because they “care for the poor.”

Hushang Ansary ($250,000): Ansary, a Houstonian, served as CEO of the Iranian National Oil company and as that nation’s ambassador to the United States before the 1979 revolution. When he fled stateside, those contacts came in handy—he partnered with Henry Kissinger on a Caribbean resort. He’s the former chairman of oil field services company Stewart & Stevenson and a longtime Republican donor—a gallery at George H.W. Bush’s presidential library is named after him.

Andrew Beal ($100,000): The Dallas banker and math whiz once attempted a hostile takeover of Trump’s bankrupt Atlantic City casino. A self-described libertarian (he has given six figures to the third party in the past), he launched his own super-PAC, Save America From Its Government, to back Trump in 2016. After the election, he told Forbes, “We are now on a path to smaller government intrusion in our lives.” He once lost $16.6 million playing poker.

Tim Dunn ($100,000): The West Texas oil executive—he’s the founder and CEO of Crownquest Operating—is a staunch conservative Christian who has done more than almost anyone else to bankroll the state Legislature’s hard-right shift. In 2014, Dunn was a top donor of the short-lived Campaign for Primary Accountability, a super-PAC that targeted incumbents of both parties; that year, one of their major beneficiaries happened to be an El Paso city councilor named…Beto O’Rourke.

John Childs ($100,000): Dubbed the “Republican ATM” by Boston magazine, the private equity titan acquired his massive fortune through leveraged buyouts of companies like Snapple and Sunny Delight. He’s written big checks to groups like American Crossroads, the Congressional Leadership Fund, and the Club for Growth Action—another major super-PAC attacking O’Rourke. He spent most of his career in Boston, but now resides in Vero Beach, Florida.

Jeffrey Hildebrand ($50,000 individually; $50,000 from his wife, Melinda): Hildebrand founded Hilcorp Energy, a Houston-based oil and gas company, which was responsible for a weekslong natural gas leak in Alaska’s Cook Inlet in 2017. He gave a quarter of a million dollars to the pro-Jeb Bush Right to Rise super-PAC in 2016.

Gene Phillips ($45,000): The insurance and real estate kingpin lives next door to former President George W. Bush in Dallas, but hasn’t paid property taxes on his 16-acre, $29 million mansion since 2005 because of a city law that allows senior citizens to defer property taxes indefinitely. Phillips’ house is so big that when Phillips was forced to wear an electronic tracking bracelet in 2000 after being charged with fraud, conspiracy, and racketeering (he was ultimately acquitted), the FBI had to install three different monitors in order to have sufficient range. “We wanted to make sure he didn’t get lost,” a bureau official told the New York Times.

Bob Murray ($20,000): Murray contributed to the super-PAC through Murray Energy, his Ohio-based coal company. In 2017 he sued HBO’s Last Week Tonight for calling him a “geriatric Dr. Evil” in a segment that noted Murray has continued to insist that the 2007 Crandall Canyon mine collapse—which killed six miners and three rescue workers—was caused by a naturally occurring earthquake, even as government investigators concluded otherwise. (The suit was thrown out.) Murray, who calls global warming a “total hoax” and donated $300,000 to Trump’s inaugural committee, sent the president a memo not long after the inauguration outlining 16 environmental regulations he’d like to eliminate. Almost all have been rolled back.