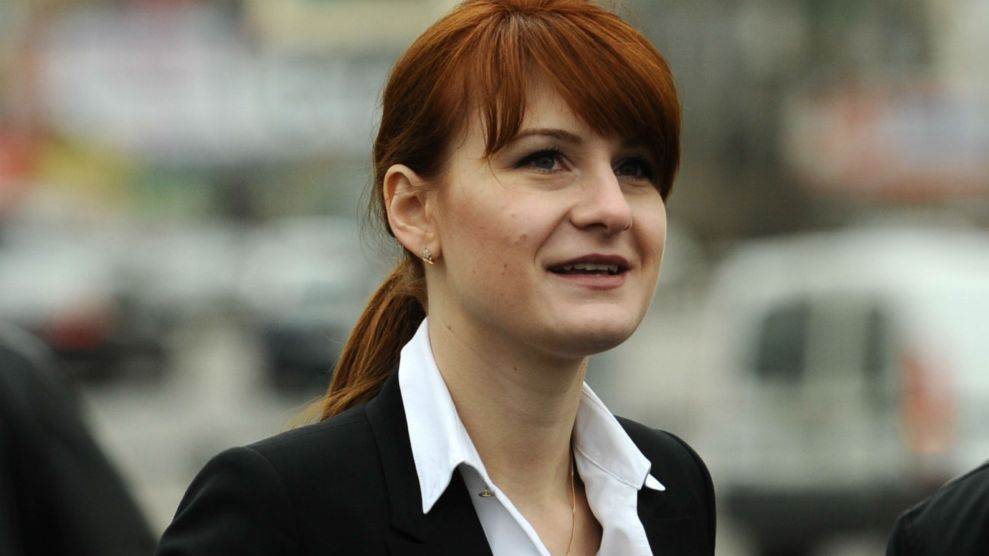 Accused Russian spy and gun rights activist Maria Butina is getting closer to cutting a deal with the US government. That’s what both her lawyers and the Justice Department explained in a court filing Wednesday, in which they wrote they “remain optimistic” about resolving this case without a trial. The filing comes two weeks after federal prosecutors first revealed they are negotiating a plea deal with Butina.

The 30-year-old Butina, once a graduate student at American University, was arrested in July and charged with working as an unregistered foreign agent on behalf of the Kremlin. Prosecutors have alleged that Butina’s cultivation of connections within the upper echelons of the National Rifle Association was part of an official Kremlin effort, while her lawyers have contended she was just a starry-eyed student “fantasizing about a future career in diplomacy and jabbering about personal events and peacebuilding aspirations.”

Butina was regularly in contact with top Russian and American officials. These include Alexander Torshin, a sanctioned Russian banker and politician with close ties to President Vladimir Putin; Trump campaign adviser J.D. Gordon; now-White House national security adviser John Bolton; one-time NRA president David Keene; and GOP consultant Paul Erickson, among others. Though the Butina case is separate from special counsel Robert Mueller’s investigation, her cooperation could no doubt shed light on issues of interest to his probe or congressional inquiries. Several of her connections, including Torshin, Erickson, and Gordon, have also become ensnared in the Trump-Russia saga, having been asked to submit documents or sit for interviews with the special counsel team or Senate investigators.

In the event Butina makes a deal to cooperate with Justice Department prosecutors, they could learn a lot. Here are just a few of the mysteries she could help shed light on:

1. Did Russian sources give the NRA any money intended to help Trump’s campaign?

The NRA donated $30 million to President Donald Trump’s 2016 campaign, and both the FBI and the Federal Elections Commission are now reportedly investigating whether some of these funds came by way of Russian sources. Foreign entities cannot legally contribute to federal elections.

McClatchy has reported that the FBI is looking at Alexander Torshin, a former Russian politician from Putin’s political party who now helps lead Russia’s central bank, in connection with such questions. Torshin was also Butina’s collaborator as the pair cultivated ties to the NRA beginning in 2013. Two years prior, Butina created the Right to Bear Arms, a Russian gun rights group modeled after the NRA. Torshin became an avid supporter of the group, introducing gun rights legislation in Russian parliament. In 2013, they invited then-NRA president David Keene to Moscow for a 200-person meeting of their organization. Former UN ambassador John Bolton, a onetime member of the NRA’s international affairs subcommittee, also came to Moscow, where he recorded a video with Butina promoting Russian gun rights. Now that Bolton is Trump’s national security adviser, Democrats have raised questions about whether he properly disclosed his work with Butina when applying for his latest security clearance.

Paul Erickson, an NRA member and Republican operative, joined Keene and Bolton on the Russia trip. Erickson returned in 2014 and then again with Keene in 2015. Torshin, who attended every NRA convention from 2012 through 2016, was joined by Butina at the 2014 and 2015 conventions, where they met top Republican operatives.

Prosecutors now allege that Torshin was in fact directing Butina’s gun rights networking in the United States as part of a Russian influence effort. If the government wants to get to the bottom of whether the NRA was getting Russian money to boost Trump, Butina may possess valuable information about Torshin’s role in the alleged scheme.

2. Why did Butina’s lover try to make a Kremlin introduction to the Trump campaign?

Following his visit to Russia in 2013, Butina and Erickson struck up a romance; the pair say they’ve been a couple ever since. Over the course of their relationship, Erickson, touting his NRA connections, made several moves aimed at connecting the Trump campaign to the Kremlin by way of Torshin.

In May 2016, the longtime GOP operative from South Dakota sent a note to Trump campaign adviser Rick Dearborn with the subject line “Kremlin Connection.” In it, he asked Dearborn and Sen. Jeff Sessions, then advising the campaign on foreign policy, for help in connecting candidate Trump and Putin, who Erickson said wanted to invite Trump for a pre-election Kremlin visit. He offered that, thanks to the NRA’s reach, he was in a position to “begin cultivating a back-channel to President Putin’s Kremlin.” Erickson also suggested that Trump could meet a Putin emissary, who appears to be Torshin, during the upcoming NRA annual meeting. Dearborn sent the request up to the highest echelons of the Trump campaign—Trump son-in-law Jared Kushner and campaign chairman Paul Manafort—noting that Torshin wanted “to discuss an offer he claims to be carrying from President Putin to meet with DJT.” (It is unclear if this meeting took place; an adviser close to the Trump campaign told the New York Times that Trump did not attend the reception in question.)

Erickson’s offers to the campaign have since attracted investigators’ attention: The Senate Judiciary Committee has sent letters to the Trump campaign’s foreign policy advisers asking for documents related to Erickson and Torshin, and also to Erickson himself requesting he submit documents and sit for an interview as part of the Russia probe.

Butina, as Torshin’s collaborator and Erickson’s partner, was smack dab in the middle of this effort in May 2016. In fact, during this same month, Butina herself was part of a group that unsuccessfully sought a meeting with the Trump campaign. So it’s likely she could shed light on Erickson and the NRA’s efforts to connect Trump’s campaign and the Kremlin.

3. What motivated Butina’s persistent lobbying of Republican officials, including Trump, for further cooperation with Russia—and who else was involved?

Were her entreaties to GOP leaders just the well-intentioned efforts of an aspiring diplomat? Or was she, as prosecutors allege, acting as part of an official Russian effort to influence the GOP establishment?

Butina’s record of lobbying on behalf of Russia is well-documented and extensive. Following the 2015 NRA convention in Nashville, Butina posted a photo with Wisconsin Gov. Scott Walker on Vkontakte (Russia’s version of Facebook), noting that he was a likely presidential nominee and that their meeting could be the “beginning of a new dialogue between Russia and the US.” A few months later, Butina penned an article for the conservative National Interest, urging friendship between “the bear and the elephant,” and adding: “It may take the election of a Republican to the White House in 2016 to improve relations between the Russian Federation and the United States.”

In July 2015, Butina tried to secure a meeting with then-candidate Trump, routing her request through Erickson, whom she has been reportedly dating for five years. Erickson reached out to Trump campaign official Sam Nunberg to try to get Butina a meeting with the candidate at a campaign stop in Las Vegas. Though the campaign declined, Butina went to the event. During the audience Q&A, she asked Trump a question about whether he had plans to continue Russian sanctions, which Butina called “damaging” to both the American and Russian economies. Trump reassured her that he didn’t think the sanctions were needed. In May 2016, as the NRA hosted its convention in Louisville, Butina briefly met with Donald Trump Jr. and gave a speech at an NRA fundraiser involving Republican Kentucky Gov. Matt Bevin.

US prosecutors allege Butina’s persistence and savvy in pursuing such relationships is not her independent effort, but rather part of an official operation to advance Russian interests with Torshin as an intermediary guiding Butina. If they’re right, her cooperation could help prosecutors understand who with links to Russia was coordinating her efforts, and, crucially, what else they were up to.