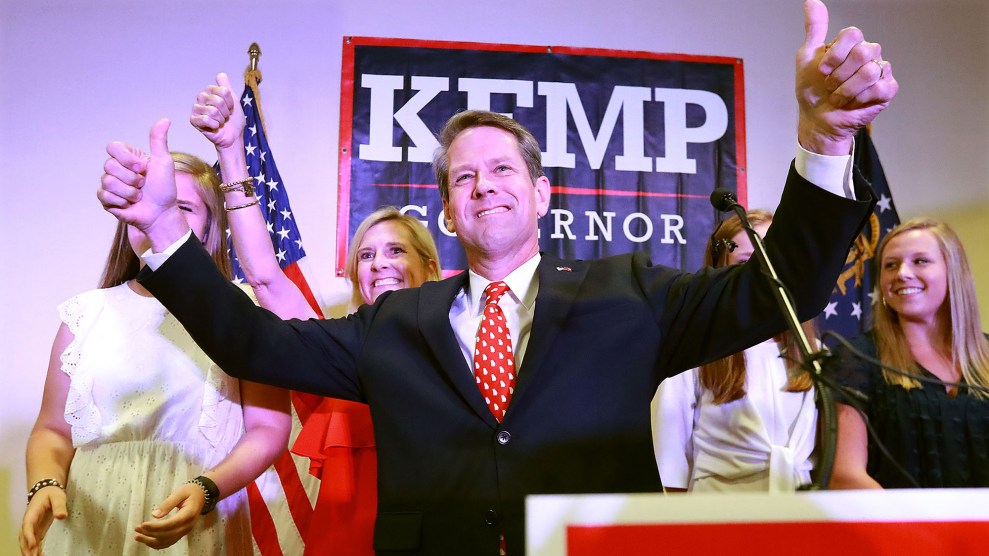 Secretary of State Brian Kemp gives his victory speech in the GOP primary runoff in Athens, Georgia, in July. Curtis Compton/TNS via ZUMA

After more than a week of contentious vote-counting and legal fights, Democrat Stacey Abrams effectively ended her bid to become the next governor of Georgia Friday night, acknowledging that Republican Brian Kemp would be certified as the winner. In a fiery speech indicting her opponent’s actions as secretary of state, Abrams refused to call it a “concession,” she rather acknowledged that there was “no further viable remedy” moving forward.

Under Kemp, she said in her speech Friday, “democracy failed Georgia.”

The race captured nationwide attention and drew visits from the likes of Oprah and Barack Obama, who hoped to turn this Deep South state blue. Abrams’ bid to become the country’s first black female governor ran up against Georgia’s conservative politics, as well as policies overseen by Kemp, Georgia’s secretary of state, that made it harder for many residents to vote.

Kemp won just over 50 percent of the vote, avoiding the runoff election that would have been triggered if no candidate had achieved a majority and that Abrams’ camp was hoping for over the past week and a half. The election was a clash of progressive policies versus ultra-conservative ones, with Abrams running as a liberal Democrat and Kemp embracing the anti-immigrant fervor of President Donald Trump. In the end, she came much closer than any Democrat running statewide in Georgia in several years.

The race also served as a national flashpoint in the partisan battle over voting rights. Abrams became a political star in 2014 for her efforts to register minority voters in Georgia and hasten its shift from red to blue, as the state’s demographics change. Kemp was Abrams’ foil, a conservative Republican whose policies as secretary of state made it more difficult, particularly for minority voters, to cast a ballot. The election became a contest of whose vision for the state would prevail. Abrams sought to turn out the electorate she had tried for years to get to the polls; Kemp fought forcefully to keep in place policies that made it harder to register to vote and cast a ballot.

Kemp threw a final wrench into the race two days before the election, when he launched an investigation, without supplying any evidence, into the state Democratic Party for an alleged cyberattack on the state’s voting system. The bizarre allegation was widely viewed as an abuse of power and a last-ditch effort to defeat Abrams. Kemp has repeatedly initiated politically expedient investigations that ultimately fizzle without findings of wrongdoing. The episode also raised questions about his impartiality overseeing an election in which he is on the ballot. (Kemp only resigned as secretary of state last week, two days after Election Day.)

Kemp drew national scrutiny in the Republican primary earlier this year with an attention-grabbing ad, in which he suggested he would round up undocumented immigrants in his pickup truck and deport them himself. In October, the Associated Press reported that Kemp’s procedures had caused 53,000 voters’ registrations to be placed in limbo. Of those voters, 70 percent were African American, in a state that’s just 32 percent black. They could still vote with proper ID, but the controversy shined a spotlight on Georgia’s discriminatory voter registration rules that frequently cause minority voters to have their registration applications rejected, and it sowed confusion that threatened to depress turnout.

Kemp spent the last month of the campaign battling lawsuits from civil rights groups that sought to halt various policies of his office that disproportionately disenfranchised minority voters. Two suits successfully blocked Georgia’s practice of rejecting absentee ballots when voters’ signature on the envelope fails to match their signature on file without first giving voters an opportunity to verify that the ballot is theirs. The suits were prompted in mid-October by data showing that Gwinnett County had rejected nearly 15 percent of ballots from Asian Americans and 8 percent from African Americans, but only 2.5 percent from white voters. Kemp defended the practice but lost. Just before the election, another federal judge ruled that recently naturalized citizens flagged as noncitizens when they attempted to register must be permitted to vote. For years, Kemp’s policies have prevented new citizens from voting because of old data in a state database.

The Kemp-Abrams race, which polling showed was tight till the very end, highlights Georgia’s slow shift from a deep-red state to a purple one, as the state’s demographics shift and Republican-leaning suburban voters shrink from a GOP increasingly defined by rage against immigrants and minority groups. But as Kemp’s win demonstrates, Republicans still have the edge.