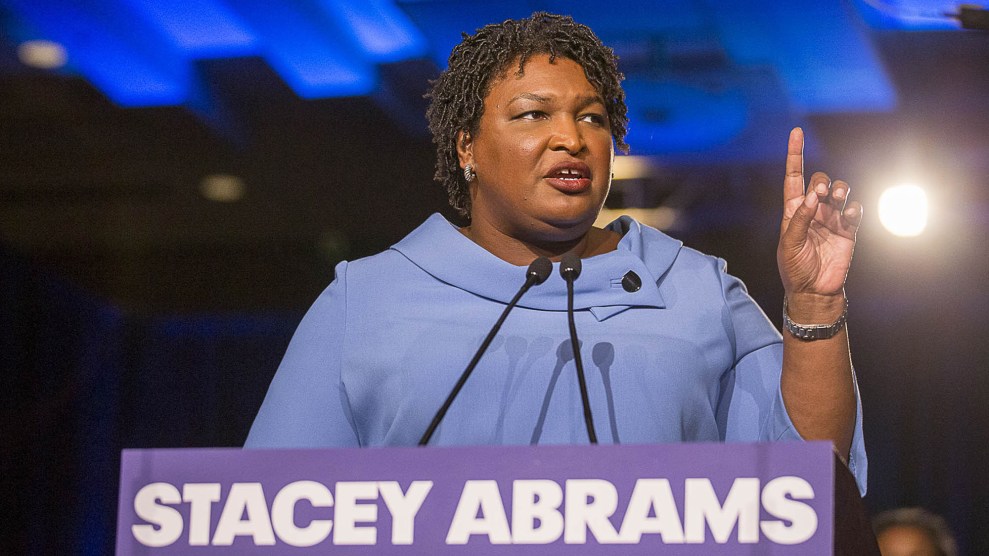 Allies of Stacey Abrams, the Democrat who came up just short in Georgia’s gubernatorial election this month, sued the state on Tuesday, alleging that its election system violates the Constitution and federal voting rights laws.

The lawsuit cites an extensive list of voting problems in Georgia, including voter registration issues and Election Day snafus that prevented an unknown number of people from voting. It argues that the secretary of state and state board of elections systematically disenfranchised some voters and effectively disenfranchised others by creating conditions that made it harder for people of color to vote.

Fair elections “are the moral foundation of the compact between the government and its citizens,” lawyers for Fair Fight Action and Care in Action, the two groups that filed the lawsuit, argue in their complaint. In 2018, they write, “Georgia’s elections officials broke that compact.”

The lawsuit asks a federal judge to force Georgia to change how the secretary of state and elections board administer elections in Georgia. The long list of requests include blocking the state’s current practice of purging infrequent voters from the rolls; ending the use of electronic voting machines without a paper trail; and ensuring that local election officials are properly trained so that inadequate equipment and misinformation do not not disenfranchise Georgia voters. The lawsuit doesn’t challenge the results of the November 6 election, which Abrams lost to Republican Brian Kemp by 1.4 percentage points.

Voting rights became a major issue in the election, which Kemp himself oversaw as secretary of state. If Democrat John Barrow wins his runoff on December 4 to replace Kemp as secretary of state, he would be in a position change the state’s implementation of some of its election rules and help improve preparation at the county level. Failing that, the lawsuit aims to reform the state’s voting rules in court. “The voters and the citizens of Georgia deserve an election they can have confidence in,” Lauren Groh-Wargo, Abrams’ campaign manager and now the CEO of Fair Fight Georgia, told the Atlanta Journal-Constitution.

The 66-page complaint lays out a voting system that makes it difficult to cast a ballot, particularly for people of color. It highlights Kemp’s failure to prepare local officials for record turnout or ensure that poll workers offer voters provisional ballots when they do not appear on the voter rolls, rather than turn them away. Whether or not the suit is successful in court, it presents a damning record of Kemp’s nine years as secretary of state.

For years, voting rights advocates have butted heads with Kemp. He aggressively purged Georgia’s voter rolls, removing more than 2 million voters after they sat out a series of elections. The Supreme Court ruled this year that aggressive purges like Kemp’s are legal under a federal law that governs voter registration for federal elections, but this lawsuit alleges—without explaining why—that they are unconstitutional and that Kemp specifically used them in years that he was up for reelection to benefit his candidacy.

As secretary of state, Kemp launched investigations against some voter registration groups, including one created by Abrams to register voters before the 2014 midterms. So it was unsurprising when he announced an investigation into the Georgia Democratic Party just two days before the election this year, based on unsubstantiated claims that the party had tried to hack state’s centralized election system. Kemp implemented a program that prevented tens of thousands of people, most of them African American, from registering because their registration information didn’t precisely match the information on record with state or federal databases, down to each hyphen. His office defended the state’s use of aging voting machines with no paper trail despite evidence that they are vulnerable to hacking. A federal lawsuit over whether Georgia’s machines are so insecure that their use violates Georgia voters’ constitutional rights is ongoing.

These ongoing problems were compounded this fall as the election drew near. Kemp’s exact-match policy put the registrations of 53,000 people on hold, and though his office assured reporters that those voters would be allowed to vote on Election Day, there were reports that some poll workers were unaware of this fact and prevented people from voting. Under a Georgia law that requires officials to determine whether voters’ signatures on their absentee ballot envelopes match their signatures on file, Gwinnett County attempted to discard a large number of absentee ballots sent in by voters of color, inviting yet more intervention from a federal judge. And on Election Day, long lines, failing voting machines, and an inadequate number of provisional ballots plagued several voting locations, particularly in precincts with concentrations of minority voters.

When Mother Jones requested records from Kemp’s office on any guidance offered to local election officials on how to prepare for the high-turnout midterms, his office responded that it had no records of providing any advice to counties on preparing for high turnout.

Although the lawsuit does not seek to change the results of this year’s election, it asks the federal courts to weigh in on whether an election like this one is legitimate, or whether the totality of problems amounts to an unconstitutional system.