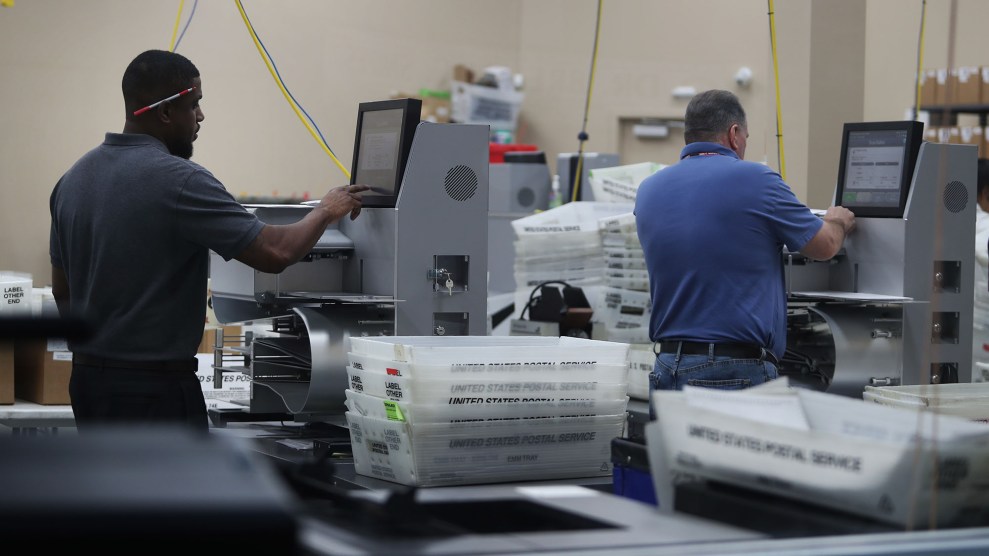 With Florida’s Senate and governor’s races on the line, all eyes are on the recount underway in Broward County, which has sparked a fierce clash of lawsuits and protests. Reporters, lawyers, and representatives from the campaigns and political parties are packed into the county’s election headquarters to observe the process. But for all the drama outside the room, the scene inside is as tedious and dull as watching people feed hundreds of thousands of ballots, one by one, into machines.

The recount process is expected to play out in two phases. The current phase is the machine recount, in which all the ballots are sent through tabulating machines a second time. This process is triggered whenever the margin in an election is within .5 percent of the total vote. The preliminary vote totals submitted to the secretary of state on Saturday from all 67 counties triggered three statewide recounts: in the US Senate race between incumbent Democrat Bill Nelson and Republican Gov. Rick Scott, the governor’s race between Republican Ron DeSantis and Democrat Andrew Gillum, and the state agriculture commissioner contest. In Broward County, four county races were also within the .5 percent margin, so Broward is currently working on seven recounts.

The results of the machine recount are due at 3 p.m. on Thursday. If any race is then within a .25 percent margin, a manual recount is triggered. Importantly, a hand recount will not apply to the majority of the more than 8.2 million votes cast in Florida, but only to those ballots that the machines cannot read because of an overvote (when a voter selects more candidates than allowed) or an undervote (when none is selected, or fewer than allowed in races with multiple winners). The US Senate race, where Nelson trails by 12,562 votes, is almost certain to head to a manual recount that will likely decide the winner. If Nelson is going to erase his deficit with missing votes, the majority are likely here in Broward County.

Listen to reporter Pema Levy report from outside the Broward County supervisor of elections’ office, as she awaits the results of Florida’s dramatic recount, on this week’s episode of the Mother Jones Podcast:

The ballots are being counted at the Broward County supervisor of elections’ office in the suburb of Lauderhill. Lawyers, party representatives, and press gather in a large media room, where they can watch the canvassing board and local officials sit at long tables. Big windows allow everyone to watch the recount process, where local staff feed ballots through machines that sort and tabulate the votes. An equal number of representatives from both parties are in the same room as the machines, 24 hours a day, to observe the round-the-clock process.

Broward County lagged behind the rest of the state as it prepared to begin a second machine count of the 2018 election results. The first step of the process was to separate the first page of the ballot, where people voted in the contested races, from the rest of the county’s long ballot, full of state and local initiatives. That process was supposed to wrap up late Monday night. But when press and political representatives showed up on Tuesday morning, the process had not been completed. There were still about 200,000 mail-in ballots that needed to be sorted.

Before Broward County performs its machine recount, it is sorting ballots. The goal is to separate the top page of each ballot, where the candidates are listed, with the other pages of the balllots. It looks like this: pic.twitter.com/zyhCPu5dCI

As the morning wore on, the staff running the recount process decided to go ahead and tabulate a different batch of ballots, the early votes. The officials paused the sorting of the mail-in ballots and began the official count of around 299,000 early votes.

The counting part of the recount in Broward County has officially begun this morning with the tabulation of early votes. pic.twitter.com/8o4lfKd7nN

The tabulation phase kills two birds with one stone: It counts the votes for the machine recount, and it flags ballots that will be recounted manually if a hand recount is triggered on Thursday, as expected. Those ballots are separated from the rest and placed into bins. Broward has 12 high-speed tabulating machines to quickly count more than 700,000 ballots. On Tuesday, the county got a chance to show off that speed. By around 4:30 p.m. on Tuesday, the machines had already tabulated the 299,000 early votes and culled all the ballots slated for the manual recount, which were placed into 16 bins and sealed. Officials have not counted how many ballots are in the bins, and it’s unclear how many of them were flagged as an undervote or overvote in one of the key races, as opposed to local contests. County officials will not release the incremental outcome of the machine recount until the results are sent to the secretary of state on Thursday.

On Tuesday evening, the night shift will return to sorting mail-in ballots. These officials expect to finish so in time for the 7 a.m. morning shift to begin counting them. But the county has blown its own internal expectations and deadlines several time in the last week, and it is now on the clock to get its results in on time on Thursday, when the real drama will begin with the hand recount.