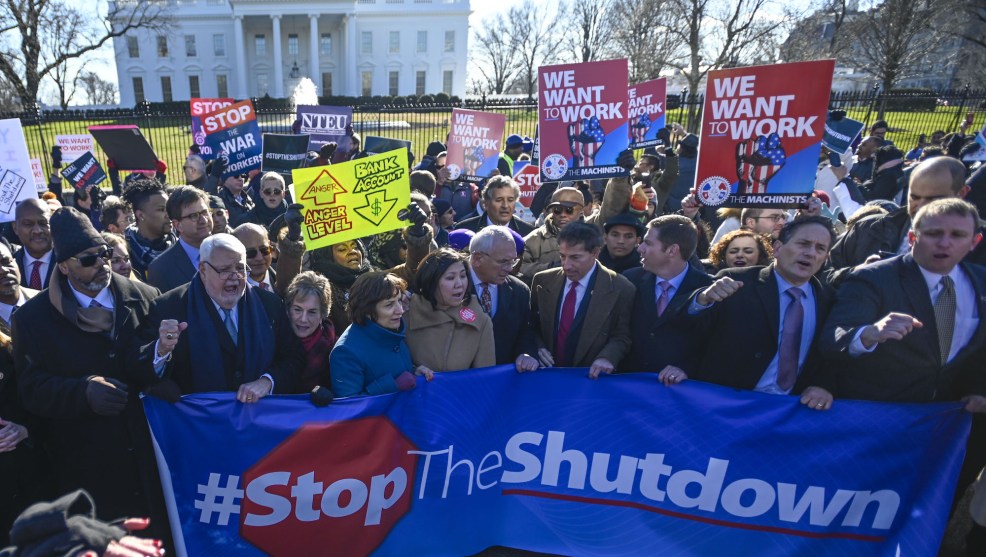 Workers and congressional Democrats protest the shutdown outside of the White House.Riccardo Savi/ZUMA Wire

Sen. Tina Smith (D-Minn.) introduced a bill Wednesday that would provide back pay to federal contractors who are losing wages during the federal shutdown. The Fair Compensation for Low-Wage Contractor Employees Act would apply to all furloughed or laid-off contractors who make up to 200 percent of the federal poverty level for a family of four. “For me, the people that I’m thinking of are often invisible—janitors and cafeteria workers who are proud of the work they do and being able to support their families,” says Smith. “These people just want to work.”

A bill to pay back federal contractors was also reintroduced in the House last week, though that legislation did not specify how workers would be paid. The Senate bill would use two existing acts, which already govern federal service contracts and construction projects, to allow for the companies that employ contractors to apply for back pay for their workers.

According to a new estimate from nonprofit Good Jobs Nation, a little over 1 million federal contract workers—a third of whom make $15 or less an hour—are unemployed because of the shutdown. Smith says that while her office does not have an exact number for how many workers the bill will cover, she expects the number to be in the “thousands.”

Smith’s legislation is just one of several bills introduced this month to protect federal workers from the financial effects of the shutdown. On Tuesday, a bipartisan coalition introduced the Financial Relief for Feds Act, which would allow federal employees and contractors to withdraw funds from their retirement accounts penalty-free. Last week, Sen. Brian Schatz (D-Hawaii) and Rep. Derek Kilmer (D-Wash.) introduced a bill that would prevent landlords and creditors from taking action against federal workers or contractors who are currently without pay.

So far, of all the measures introduced to protect vulnerable government workers, the only bill to have passed both chambers and get the president’s signature is a measure to grant back pay to furloughed workers. None of the legislation, however, can go into effect until the shutdown is over.