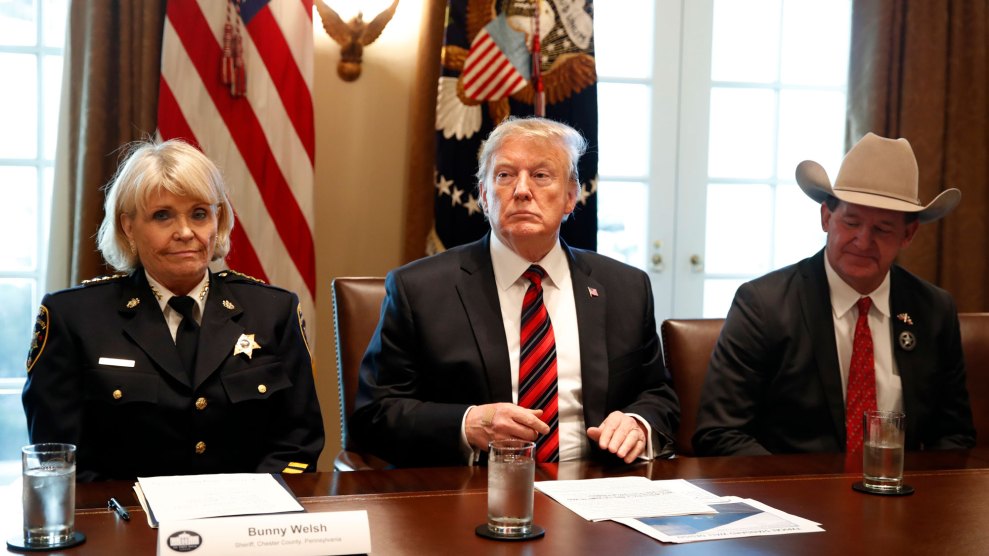 New polls from the Washington Post-ABC News and CNN released Sunday revealed who most Americans think bear much of the blame for the longest government shutdown in US history: President Donald Trump and congressional Republicans.

53 percent of Americans said the partial shutdown was mostly the fault of Trump and Republicans, versus 29 percent who thought congressional Democrats were responsible.

For 23 days, negotiations between congressional Democrats and Trump have stalled over the president’s demands for funding to build a wall along the southern border. In an Oval Office address last week (which Mother Jones blogger Kevin Drum fact-checked here), Trump called the situation at the border a humanitarian crisis and, up until Friday, repeatedly suggested he would declare a national state of emergency to free up money for the wall. On Saturday night, Trump called into Jeanine Pirro’s Fox News show to say he had an “absolute right” to call for a national emergency and criticized Democrats for spending time away from Washington during the shutdown. Trump told Pirro he had “no idea” if he could come to a deal to end the shutdown with House Speaker Nancy Pelosi (D-Calif.).

“I’d rather see the Democrats come back from their vacation and act,” Trump told Pirro. “I’d like to see them act responsibly, and they’re not acting responsibly.

But the majority of Americans don’t appear to agree that Congress’s Democrats are to blame. The Washington Post-ABC News poll of 788 people, with a margin of error of 4.5 points, found that 53 percent of Americans said the partial shutdown was mostly the fault of Trump and Republicans, versus 29 percent who thought congressional Democrats were responsible. Two-thirds of those polled disapproved of Trump using presidential powers to declare a state of emergency to fund the border blockade.

Meanwhile, a CNN poll of 848 adults, with a margin of error of 4.1 points, showed that 55 percent of respondents thought the president was more responsible for the shutdown than Democrats. Fifty-six percent of those polled opposed building a wall, while more than half of respondents didn’t think the situation on the southern border was a crisis.

There are signs that the the president’s obstinance is striking the wrong chord with the public: Since December, his disapproval rating has risen five points to 57 percent, while his approval rating remains at 37 percent—10 points below Ronald Reagan’s low in 1982.