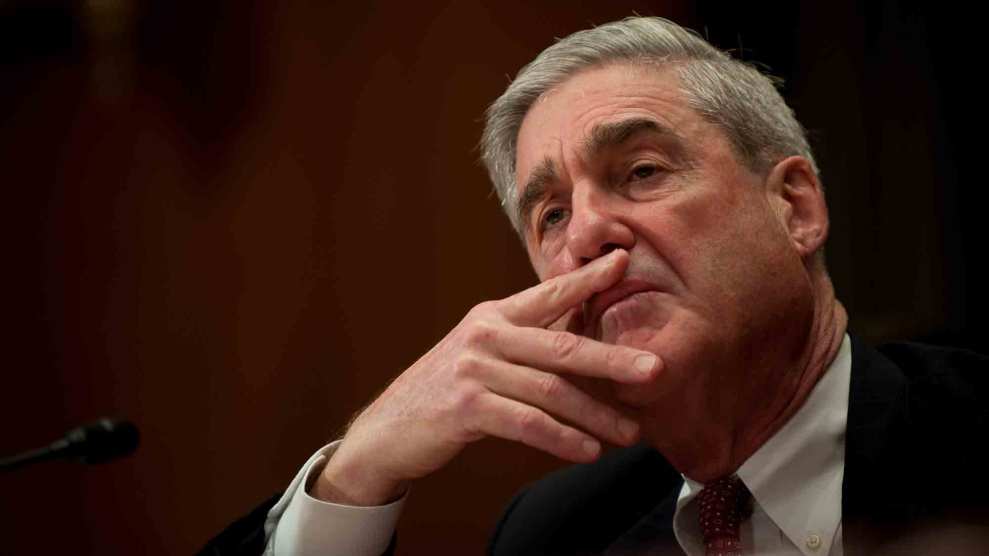 Special counsel Robert Mueller has completed his investigation of the Trump-Russia scandal and submitted a confidential report to Attorney General William Barr on Friday.

Barr told the leaders of the House and Senate judiciary committees in a letter today that he “may be in a position to advise you of the special counsel’s principal conclusions as soon as this weekend.” He said Friday that he would consult with Mueller and Deputy Attorney General Rod Rosenstein “to determine what other information from the report can be released to Congress and the public consistent with the law.” Barr, who was appointed to the post in February despite concerns over a memo he wrote last year in which he described the Russia probe as “fatally misconceived,” refused to pledge to release Mueller’s report to the public during his confirmation hearing.

The House voted 420-0 last week to urge the Justice Department to publicly release Mueller’s full report. Members of both parties immediately pressed Barr to hand over the document.  It “is imperative for Mr. Barr to make the full report public and provide its underlying documentation and findings to Congress,” House Speaker Nancy Pelosi (D-Calif.) and Senate Minority Leader Chuck Schumer (D-N.Y.) said in a statement. “Attorney General Barr must not give President Trump, his lawyers or his staff any ‘sneak preview’ of Special Counsel Mueller’s findings or evidence, and the White House must not be allowed to interfere in decisions about what parts of those findings or evidence are made public.”

“The Special Counsel’s investigation focused on questions that go to the integrity of our democracy itself: whether foreign powers corruptly interfered in our elections, and whether unlawful means were used to hinder that investigation,” the Democrats added. “The American people have a right to the truth. The watchword is transparency.”

Rep. Doug Collins (R-Georgia), the top Republican on the House Judiciary Committee, said Friday that he expects “the Justice Department to release the special counsel’s report to this committee and to the public without delay and to the maximum extent permitted by law.” President Trump has also claimed that he wants the report released. “Let it come out,” he told reporters on Wednesday. “Let people see it. Let’s see whether or not it’s legit.”

Trump lawyers Rudy Giuliani and Jay Sekulow in a statement said they are “pleased that the Office of Special Counsel has delivered its report to the Attorney General pursuant to the regulations. Attorney General Barr will determine the appropriate next steps.”

Mueller was appointed to oversee the Russia probe in May 2017, days after Trump abruptly fired then-FBI Director James Comey. For nearly two years, the special counsel has quietly led a wide-ranging investigation that has examined possible coordination between the Trump campaign and Russia and potential obstruction of justice by the president, among other matters.

The probe has resulted in 34 indictments or guilty pleas, including those of top Trump campaign officials and allies. That includes Trump’s lawyer and fixer Michael Cohen; Trump campaign foreign policy adviser George Papadopoulos; Trump campaign chairman Paul Manafort; Manafort’s deputy Rick Gates; and Michael Flynn. Mueller indicted Roger Stone, a longtime Trump adviser, in January for perjury and obstruction of justice. Cohen, who cooperated extensively with Mueller and with federal prosecutors in the Southern District of New York, was sentenced to three years in prison and ordered to pay $100,000 in fines and $1.4 million in restitution. Manafort, who violated his cooperation agreement by lying to Mueller’s investigators, received more than seven years in prison for a range of crimes, including tax fraud, conspiracy, and obstruction of justice. He was also ordered to pay nearly $25 million in restitution and a $50,000 fine.

Multiple publications reported on Friday that Mueller not recommending any further indictments.

It remains unclear whether the report Mueller has given to Barr contains: new information, classified information, grand jury information, conclusions. It’s also unknown how many pages Mueller’s report runs. Justice Department guidelines governing the special counsel merely require Mueller, once he concludes his work, to “provide the Attorney General with a confidential report explaining the prosecution or declination decisions reached by the Special Counsel.” That might mean a short report that lists the indictments with little further information, or a lengthy report analyzing Trump’s conduct.

Head here for more on what may—or may not—come in the days ahead.