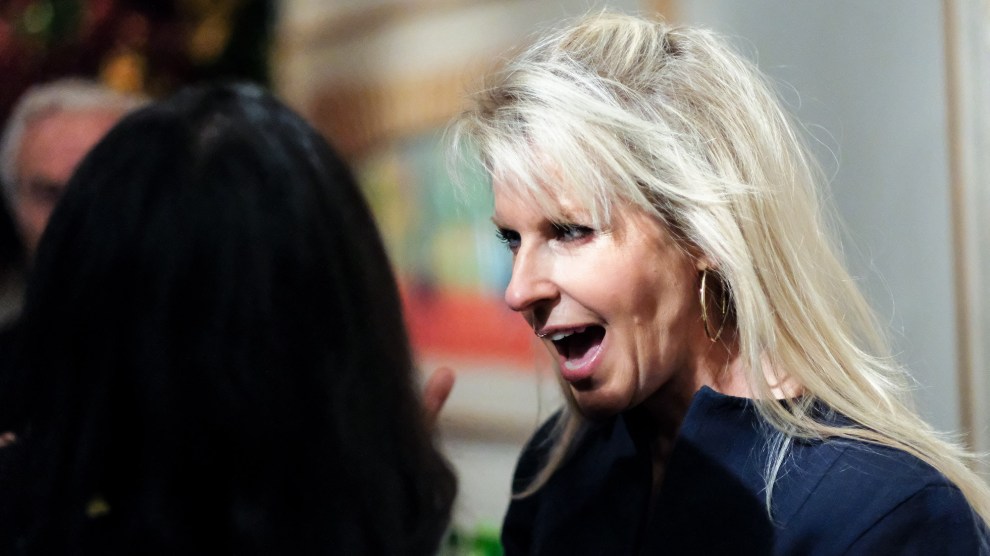 More than two years after she withdrew from consideration for a White House national security position amid plagiarism accusations, Fox News commentator Monica Crowley is reportedly set to take a job as chief spokeswoman for Treasury Secretary Steven Mnuchin. But Crowley’s work in the interim has hardly made her less controversial. In 2017, she registered as a lobbyist for Victor Pinchuk, a Ukrainian billionaire whose large payments (for speeches) to prominent Americans, including Donald Trump, and apparent promotion of pro-Russian interests drew scrutiny from special counsel Robert Mueller. Crowley’s lobbying for Pinchuk could complicate her role as the top flack for an agency that is responsible for imposing and policing US sanctions on Russia and on a prominent Ukrainian leader tied to Pinchuk.

In January 2017, Trump picked Crowley, a onetime research assistant for former President Richard Nixon who gained prominence as a conservative pundit, to head strategic communications for the National Security Council. Crowley announced she would not take the job following reports that she had plagiarized large sections of her 2012 book and her 2000 Ph.D. dissertation. “After much reflection I have decided to remain in New York to pursue other opportunities,” she said in a January 16, 2017, statement. Within a few weeks, according to filings with the Justice Department, Crowley had begun working with Douglas Schoen, a Democratic lobbyist with clients in Ukraine, to “provide outreach services” for Pinchuk, a steel magnate whose empire also includes media and banking holdings. A filing submitted by Schoen noted that Crowley had contacted a slew of prominent Republicans, including the late Sen. John McCain (R-Ariz.), then-Secretary of State Rex Tillerson, and Defense Secretary James Mattis on Pinchuk’s behalf. She also reported meeting with Pinchuk on February 2, 2017, in London to discuss “peace efforts involving Ukraine” and other topics.

Those “peace efforts” sound like a reference to a plan that Pinchuk was promoting for settling the conflict resulting from Russia’s 2014 invasion of Ukraine. Pinchuk presents himself as pro-Western, but his plan, which he detailed in a December 2016 Wall Street Journal op-ed, included a series of Ukrainian concessions aimed at appeasing Russia’s desire that Ukraine remain a buffer against the West. Pinchuk wrote that Ukraine should set aside efforts to enter the European Union, give up on joining NATO in favor of “neutrality,” and defer discussion of regaining Crimea, which Russian troops had seized, as part of a settlement. Pinchuk also called for Ukraine to accept “an incremental rollback of sanctions” that the United States and European states imposed on Russia for the 2014 invasion. His proposal drew attacks from some Ukrainians as overly conciliatory. “Pinchuk wants to show that business stands for the reboot of relations between the U.S and Russia, even if Ukrainian national interests are the price for that,” Hanna Hopko, the head of the Ukrainian parliament’s foreign affairs committee, said at the time. Another Ukrainian lawmaker, Mustafa Nayyem, said the proposal would “doom millions of people to legalized slavery.”

Pinchuk’s peace plan was one of a handful of proposals pushed by prominent Ukrainians in early 2017, as they sought American backing. These included a proposal by a pro-Russian lawmaker, Andriy Artemenko, that Trump’s then-lawyer and fixer Michael Cohen reportedly shared in February 2017 with Michael Flynn, Trump’s soon-to-be ousted national security adviser. Pinchuk’s plan was similar to one that former Trump campaign head Paul Manafort secretly discussed with Konstantin Kilimnik, a longtime Manafort employee in Ukraine who has ties to Russian intelligence, according to the FBI. The plan Kilimnik brought to Manafort envisioned the creation of an autonomous region in Ukraine, which Pinchuk’s proposal also hinted at. Manafort told prosecutors the plan he discussed with Kilimnik was in reality a “backdoor” way for Russia to gain control of eastern Ukraine, according to Mueller’s report, released in redacted form last week. Kilimnik was promoting the proposal on behalf of Viktor Yanukovych, the former pro-Russian president of Ukraine and Manafort’s longtime patron, whose 2014 ouster through a popular uprising precipitated Russia’s invasion. Yanukoyvch hoped to regain power as head of the autonomous region, Mueller’s report says.

Pinchuk appears to have long-standing ties to Yanukovych. According to emails released by the State Department, Pinchuk, a major donor to the Clinton Foundation, met in 2011 with an aide to then-Secretary of State Hillary Clinton to convey a message that Yanukovych, whose growing Kremlin ties worried US officials, remained committed to Ukraine’s integration with Europe.

In 2012, Pinchuk allegedly secretly bankrolled a report by Skadden, Arps, a prominent law firm, that defended the legal basis of Yanukoych’s imprisonment of his predecessor, Yulia Tymoshenko. Skadden revealed Pinchuk’s role in January when the firm agreed to pay $4.6 million to settle a Justice Department case that grew out of Mueller’s investigation into Manafort, who helped arrange for the firm’s report. Pinchuk has denied funding the report.

In recent years, Pinchuk has worked to cultivate Trump and senior Republicans. In 2015,  Pinchuk paid $150,000 to the Trump Foundation for Trump to deliver brief remarks, via Skype, to a Kiev conference funded by Pinchuk’s charitable foundation, which bankrolls various cultural causes in Ukraine. Mueller reportedly investigated the circumstances of that payment, though it is not mentioned in the portions of his report made public. Before joining the White House, Trump national security adviser John Bolton received $115,000 to participate in two panel discussions sponsored by Pinchuk. And Crowley arranged for former New York City Mayor Rudy Giuliani to speak at a June 2017 Pinchuk Foundation conference in Kiev. Giuliani, who reportedly receives at least $100,000 per speech, told Mother Jones his payment “was in line with” his standard fee but declined to specify the amount.

From February 2017 to January 2018, Crowley received at least $15,000 per month from a Pinchuk firm, EastOne Group, according to the Justice Department’s Foreign Agents Registration Act filings. It’s not clear if she has officially ceased working for Pinchuk.

In 2014, the Treasury’s Office of Foreign Assets Control imposed sanctions on Yanukovych and three allies for their role in “actions or policies that threaten the peace, security, stability, sovereignty, or territorial integrity of Ukraine.” The Department has also sanctioned numerous Russian officials and entities over the 2014 invasion and other Russian policies. Would this create a conflict for Crowley, given Pinchuk’s ties to the former Ukrainian president? Crowley and a Treasury Department spokesman did not respond to questions. Schoen and Pinchuk, through his foundation, also did not reply to inquiries.