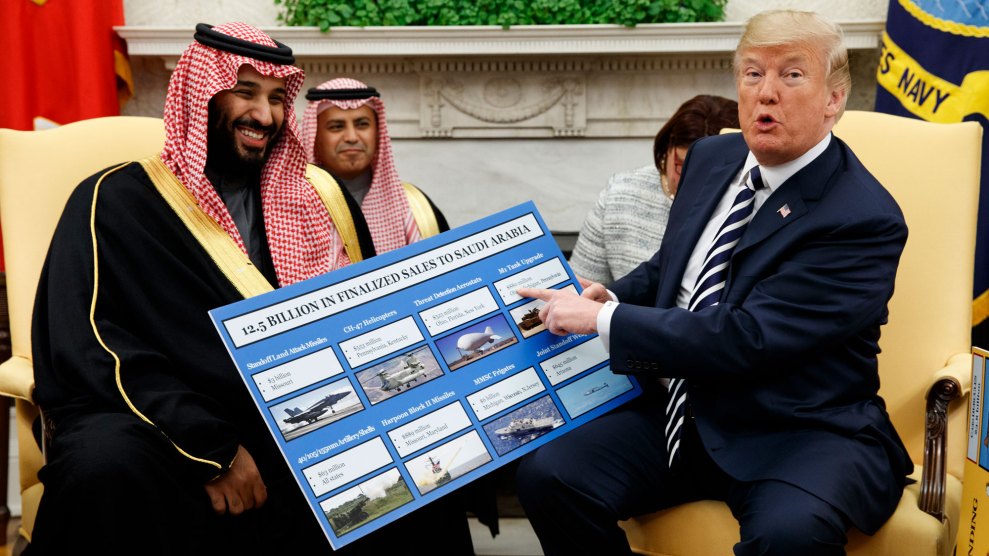 On Friday, amid escalating tensions with Iran, President Donald Trump declared an emergency to bypass Congress to push through an $8 billion arms deal with Saudi Arabia, Jordan, and the United Arab Emirates—a deal that had been stopped by lawmakers before. Simultaneously, Trump ordered the deployment of an additional 1,500 troops to the Middle East to help protect American forces on the ground.

The administration’s recent moves have drawn backlash from Democratic presidential candidates. In an interview with set to air on CBS’s Face the Nation Sunday, former Texas congressman Beto O’Rourke warned that Trump’s actions were “provoking yet another war in the Middle East where we find ourselves already engaged in war in so many countries.”

Sen. Bernie Sanders (I-Vt.) tweeted a letter from dozens of retired US military officials who warned that “a war with Iran would be a disaster for the region and for U.S. security.”

I agree with these 76 retired generals and admirals, who warn that a war with Iran would be a disaster for the region and for U.S. security, and who urge Trump to pursue diplomacy rather than an unnecessary conflict. https://t.co/tciy0Id8Qc

Sen. Elizabeth Warren (D-Mass.) criticized the Trump administration’s workaround for getting arms to “his Saudi buddies,” referencing the assassination of Washington Post columnist Jamal Khashoggi, which the CIA found had been ordered by the country’s crown prince.

Selling more weapons to Saudi Arabia doesn't make America safer or align with our country's values. It only benefits defense contractors and @realDonaldTrump's alarming desire to sow chaos abroad. l'll do everything I can in Congress to stop it.

Other Democratic candidates have been criticizing Trump’s Iran policy. At a campaign stop in New Hampshire earlier this month, former Vice President Joe Biden criticized Trump for having “no foreign policy” and expressed concern about the Iran situation. News of the military buildup in the Middle East prompted South Bend Mayor Pete Buttigieg to call on Congress to “reassert its war powers.”

It’s time to end the forever wars. But in this White House, some of the same people who got us into Iraq now seem ready to stoke a new conflict. It’s another reason Congress must reassert its war powers. https://t.co/XdTyWuAr45

In a letter to Congress discussing the Saudi arms deal on Friday, Secretary of State Mike Pompeo wrote that “Iranian malign activity” would pose “a fundamental threat to the stability of the Middle East and to American security at home and abroad.” Following the administration’s announcement, Iranian officials lashed out; one military official told the Mizan news agency: “If they commit the slightest stupidity, we will send these ships to the bottom of the sea along with their crew and planes using two missiles or two new secret weapons.”