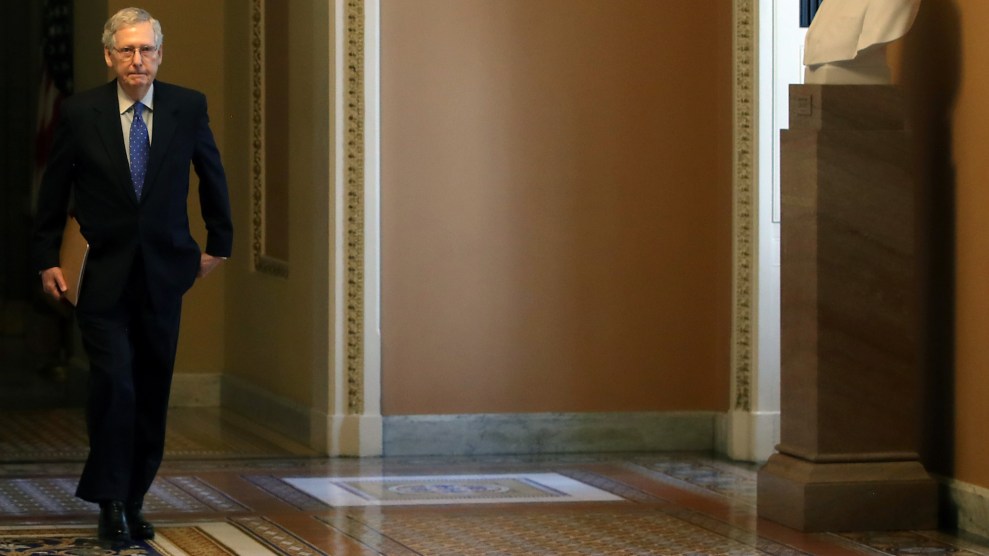 Senate Majority Leader Mitch McConnell tried Tuesday to declare “case closed” on the Russia investigation, and he attacked Democrats for continuing to investigate the president. But in making his case, McConnell ignored much of special counsel Robert Mueller’s actual report on Russian interference and the Senate’s own ongoing investigation into the matter.

McConnell’s attempt to slam the door on further congressional investigation was particularly striking because in light of the probe still being conducted by the Senate Intelligence Committee, which hopes to issue its own report by August. McConnell previously touted that committee’s investigation as definitive. Prior to Mueller’s appointment in May 2017, McConnell even argued the Senate investigation made another investigator unnecessary. A special counsel “could only serve to impede the current work being done,” by the intel committee, McConnell said at the time.

Rachel Cohen, a spokeswoman for Sen. Mark Warner (D-Va.), the vice chairman of the intelligence committee, noted that McConnell is currently blocking the Senate from taking up bipartisan legislation that would require state election offices to audit results after elections.

“Considering that the Majority Leader has refused to even consider election security legislation with wide bipartisan support, it’s startling but not surprising to see him try to ‘move on’ from Russia’s attack on our democracy – even as the bipartisan Senate Intelligence Committee continues its own investigation,” Cohen said. “If you read the Mueller report, it’s clear that the Senate must take action to protect our democracy.”

The case will be closed when Congress has finished its legitimate oversight responsibilities. That means letting Congress finish its review of the Mueller investigation.

A spokeswoman for Senate Intelligence Chairman Richard Burr (R-N.C.) declined to comment when asked if he agreed with McConnell’s claim that the Russia case is already closed. Burr later told Mother Jones that he “didn’t see” McConnell’s speech, but argued it did not undermine his committee’s investigation.

Other Democrats blasted McConnell’s statements. Senate Minority Leader Chuck Schumer (D-N.Y.) called McConnell’s speech “a concerted effort to circle the wagons, to protect the president from accountability, to whitewash his reprehensible conduct by simply declaring it irrelevant.” Schumer told reporters later that McConnell is “aiding and abetting” Russian efforts to undermine American democracy. “He should be ashamed of himself,” Schumer added.

“If any other human being had done what’s documented in the Mueller report, they would be arrested and thrown in jail,” Sen. Elizabeth Warren (D-Ma.) said in a floor speech. Warren, who is running for president, also called for Trump’s impeachment.

McConnell’s speech also relied on a switcheroo. McConnell’s office touted his remarks as declaring “case closed” on the Mueller report. But the majority leader’s actual claim was limited to the question of whether the Trump campaign had illegally conspired to carry out Moscow’s disinformation and hacking campaigns. Trump’s critics “told everyone there had been a conspiracy between Russia and the Trump campaign,” McConnell said. “Yet on this central question, the special counsel’s finding was clear: Case closed.”

That formulation ignored the entire volume of Mueller’s report dealing with whether Trump obstructed justice. The report outlined substantial evidence that Trump attempted to interfere with the investigation. Ultimately, however, Mueller declined to reach a conclusion on whether the president’s interference violated the law. Instead, Mueller suggested that Congress could investigate obstruction.

“The separation-of-powers doctrine authorizes Congress to protect official proceedings, including those of courts and grand juries, from corrupt, obstructive acts,” the report said.

Democrats’ efforts to investigate Mueller’s findings, such as the House Judiciary Committee bid to interview former White House Counsel Don McGahn, who told prosecutors about Trump’s efforts to fire Mueller, are largely focused on obstruction of justice. By urging Democrats to “move on,” McConnell was implying that they, too should ignore the obstruction issue.

But even McConnell’s claim that Mueller closed the case on collusion collapses under scrutiny. Mueller’s report said it “did not establish that members of the Trump Campaign conspired or coordinated with the Russian government in its election interference activities.” But the report made clear that its findings are not a definitive dismissal that any coordination occurred.

Mueller said his office could not obtain complete information on many instances of Russian contact with Trump aides and advisers. For instance, campaign chief Paul Manafort shared polling data with a suspected Russian intelligence asset and discussed with him a plan that Manafort later conceded would allow Russia to “gain control of eastern Ukraine.” Did Manafort tell Trump about these contacts? The report said Manafort denied this. The report also notes that Manafort expressed the expectation that Trump would pardon him if he did not cooperate and that he lied repeatedly to prosecutors, leaving the full significance of his actions unclear. That’s one of more than 35 instances where the report said investigators could not “determine,” “find,” “uncover,” or “establish” facts related to possible Trump campaign coordination with Russia.

“Given these identified gaps, the Office cannot rule out the possibility that the unavailable information would shed additional light on (or cast in a new light) the events described in the report,” the report stated.

That is hardly “case closed.”