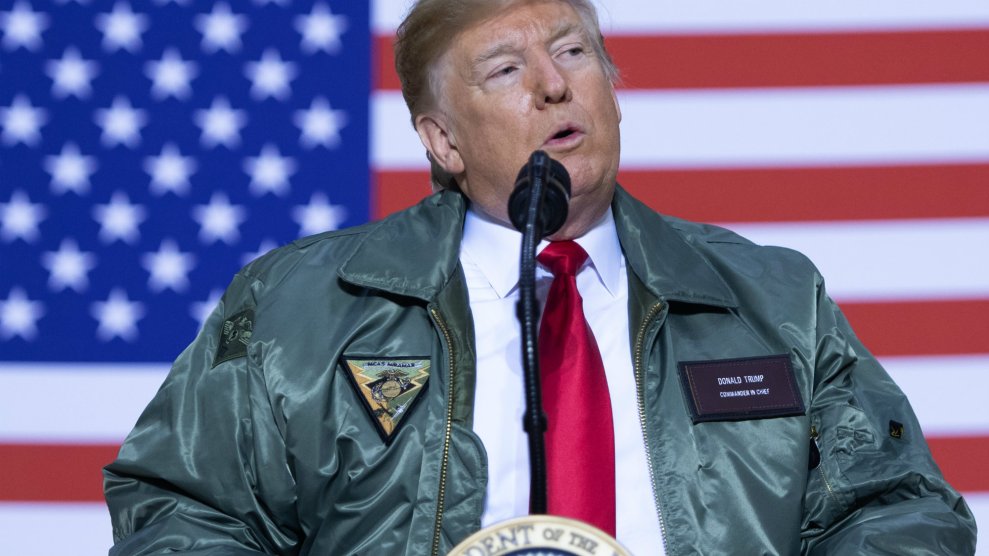 Two years ago in Mosul, Iraq, a group of Navy SEALs were administering medical aid to a young injured ISIS fighter. He was so young, they later said he was likely a teenager. Then Edward Gallagher, the senior member of SEAL Team 7 and a distinguished veteran of several combat deployments, approached them without warning and stabbed the injured fighter repeatedly in the neck and side. Gallagher’s crimes reportedly did not stop there. According to a confidential Navy report obtained by the New York Times, in the weeks before and after this incident, he also indiscriminately killed civilians, including an adolescent girl “in a flower-print hijab,” and pressured members of his unit to not rat him out. Gallagher was finally taken into custody last year in advance of his court martial—scheduled to begin on May 28—where he stands accused of a laundry list of war crimes.

Now, thanks to President Donald Trump, he may emerge from the process with a presidential pardon, exonerated of his misdeeds and free of any consequences.

Gallagher is one of at least four accused war criminals being considered for a pardon by the White House, the New York Times reported this week. The others include Matthew Golsteyn, who admitted on live television to killing an unarmed Iraqi bomb maker; Nicholas Slatten, a security contractor twice convicted for his role in a 2007 massacre that left 14 people dead; and a Marine who was filmed urinating on the bodies of several Afghans his unit had just killed. To military experts, this level of presidential intervention is not just shocking, but damaging for the system writ large, with implications for the climate of command, for military discipline, and for the safety of whistleblowers. “You can’t jump the system like that because it completely undermines the faith of our service members,” says Southwestern Law School professor Rachel VanLandingham, a former military prosecutor, defense counsel, and chief of international law for US Central Command. “It’s all about process.”

What’s more, nothing is standard about Trump’s involvement in these cases thus far. Rather than have the Justice Department review the applications for pardon and provide recommendations to the White House after several months, Trump reportedly demanded that the process be fast-tracked on these cases so he could pardon the men “on or around Memorial Day,” according to the Times.

By timing the pardons around a holiday that honors the military, Trump appears to be positioning his move as a show of support to the armed forces. Experts, though, tell Mother Jones the gesture belies more rudimentary political concerns for Trump. “This isn’t a gift to the military,” VanLandingham says. “This is red meat for his base.”

“It betrays the military,” she adds.

When alleged war criminals are allowed to walk away scot free, the military loses any moral authority it gained from adopting a systematic Law of War code of ethics decades ago. “If President Trump issues indiscriminate pardons of individuals accused—or convicted by their fellow service members—of war crimes, he relinquishes the United States’ moral high ground and undermines the good order and discipline critical to winning on the battlefield,” retired Gen. Charles Krulak, a former commandant of the Marine Corps, told the Los Angeles Times.

The impact of decisions to pardon war criminals also has serious implications for military command and morale. Within the ranks, leaders have been fighting for years to eliminate a toxic culture—especially common in elite, highly specialized groups like Navy SEALs—but real, lasting change, of course, requires that leadership set an example from the top. Research conducted by Waitman Wade Beorn, an Iraq War veteran who studies the Holocaust and the history of genocide, supports this notion; he found that during World War II, “the culture of each [German] unit and the institutional leadership most directly influenced whether war crimes were committed.” This meant that “soldiers took their cues from the guidance they were given and the examples they were shown.”

The remaining issue then is the one the New Republic asked on Monday: “Who Actually Wants War Criminals Pardoned?”

A surprising number of powerful people, as it turns out. Dozens of lawmakers support Gallagher, including disgraced Rep. Duncan Hunter (R-Calif.), who was indicted last year for misusing campaign funds, and Rep. Steve King (R-IA), whose defense of white nationalism led House Republican leaders to strip him of all committee assignments in January. When Trump said in March he would free Gallagher from restrictive confinement, his Twitter post referred to Rep. Ralph Norman (R-S.C.), a Gallagher supporter, and Fox & Friends, the morning news show Trump is known to watch avidly.

In honor of his past service to our Country, Navy Seal #EddieGallagher will soon be moved to less restrictive confinement while he awaits his day in court. Process should move quickly! @foxandfriends @RepRalphNorman

Pete Hegseth, an Iraq War veteran and Fox & Friends host, has reportedly even privately lobbied the president on behalf of Gallagher and others and effusively defended them on air, saying on the May 19 program, “These are men who went into the most dangerous places on earth with a job to defend us and made tough calls on a moment’s notice.” He added, “They’re not war criminals, they’re warriors.”

Similarly, when Trump made the extraordinary decision in December to personally review Golsteyn’s case, he cited Hegseth and Fox News by name.

These pardons wouldn’t be the first time Trump has interfered in military affairs in possibly inappropriate ways, frequently overruling military leaders. In moves widely seen as political and lacking an appropriate justification, he pushed through a near-total ban on transgender service members in April despite Army Chief of Staff Mark Milley, who Trump picked to be his top military adviser, telling Congress that he had “precisely zero” problems with transgender troops. The president has left hundreds of foreign-born enlistees at risk of deportation even as the Army has struggled to hit recruiting goals. And, most notably, he sent thousands of active-duty troops to the US-Mexico border, an area where the top general in the region says there is no present military threat.

Among the most notable objections to the potential pardons comes from retired Gen. Martin Dempsey, who was President Barack Obama’s senior military adviser. “Absent evidence of innocence or injustice the wholesale pardon of US servicemembers accused of war crimes signals our troops and allies that we don’t take the Law of Armed Conflict seriously,” he tweeted Tuesday. “Bad message. Bad precedent. Abdication of moral responsibility. Risk to us.”

During the campaign, Trump famously threatened to “bomb the shit” out of ISIS and “bring back a hell of a lot worse than waterboarding,” the interrogation technique popularized by the George W. Bush administration and widely condemned as a form of torture. Earlier this month, he pardoned Michael Behenna, an Army Ranger who had been convicted of stripping a defenseless Iraqi prisoner naked and shooting him dead.  Whether Trump will end up issuing more pardons is for him ultimately to decide, regardless of its ripple effect. By constitutional right, Trump can pardon anyone accused of a federal crime. The controversy here is not a legal one, experts say, but in using his pardon power to selectively reward service members charged with war crimes, he risks torching the military’s credibility at disciplining its own.

“He has every legal authority to do this,” VanLandingham says. “Which, of course, doesn’t make it right.”