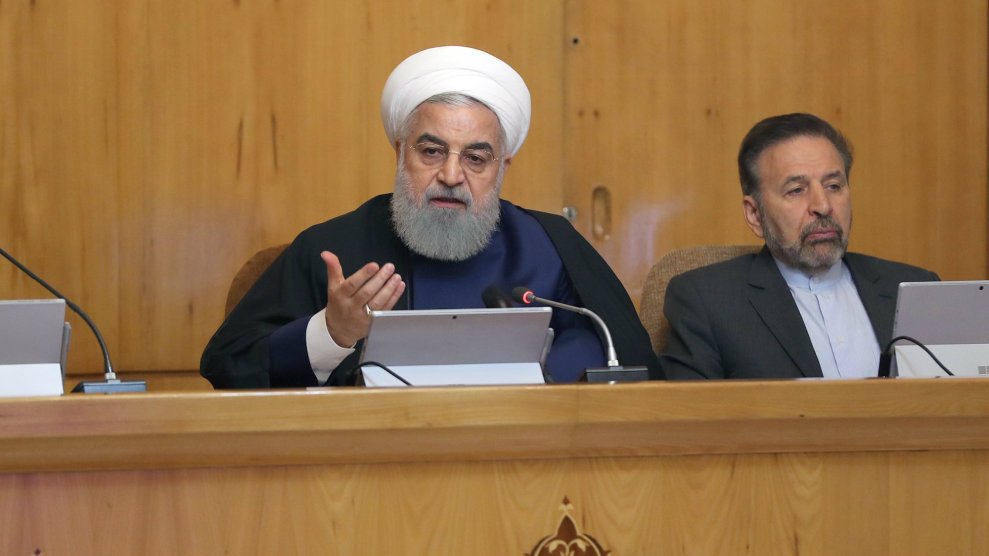 The United States is hurtling toward a conflict with Iran, and it’s not clear that President Donald Trump has an exit strategy.

In the year since he dumped the Obama administration’s prized nuclear agreement, Trump has pursued a policy of “maximum pressure” toward Iran with a series of increasingly bellicose moves. Last month, he designated the Islamic Revolutionary Guard Corps, an elite military group with vast economic influence in the region, a foreign terrorist organization. Weeks later, he banned the purchase of Iranian oil, in a blow to eight countries—including allies like Japan and South Korea—that had previously relied on US waivers to accept it.

Those actions were just a prelude to this week, during which Trump sanctioned another key Iranian export, industrial metals, and deployed an aircraft carrier to the Middle East two weeks earlier than planned in response to intelligence that Iran was targeting US troops in Syria and Iraq. “The United States is not seeking war with the Iranian regime,” national security adviser John Bolton said in a statement announcing the move, “but we are fully prepared to respond to any attack, whether by proxy, the Islamic Revolutionary Guard Corps, or regular Iranian forces.”

The statement hinted at “a number of troubling and escalatory indications and warnings” from Tehran, but the nature of this intelligence remains unclear. The Daily Beast reported Tuesday that “the administration blew it out of proportion, characterizing the threat as more significant than it actually was.” Israel, purportedly the source of the intelligence, acknowledged as much to Axios. “It is still unclear to us what the Iranians are trying to do and how they are planning to do it,” an Israeli official told the outlet.

More concerning is the role played in all of this by Bolton, who earned a reputation in the George W. Bush administration for exaggerating global threats by cherry-picking intelligence. Interagency meetings, which used to be a regular feature of the National Security Council, have all but disappeared during his tenure. The lack of a permanent secretary of defense—and the presence of an acting one with zero foreign policy experience—have increased the influence of Bolton and Secretary of State Mike Pompeo, both of whom have expressed strong anti-Iran sentiments. (On Thursday, Trump announced his intention to nominate Patrick Shanahan, the acting Defense secretary, for the permanent job.) Bolton once argued for a preemptive military strike to wipe out Iran’s nuclear program and received $40,000 in 2016 to speak before the Mujahideen-e-Khalq, a radical anti-regime organization formerly designated as a terrorist group by the United States. “The regime in Tehran needs to be overthrown at the earliest opportunity!” he told attendees at one MEK event, according to The New Yorker. Pompeo considers Iran “the world’s largest state sponsor of terrorism” and has made the questionable claim that the regime, which espouses a brutal form of Shiite Islam, has ties to al-Qaeda, the Sunni terrorist group that despises Iran.

“We’re closer to war with Iran now than we’ve been at any time since the summer of 2010,” says Joe Cirincione, president of the Ploughshares Fund.

Pompeo and Bolton see Iran’s fingerprints everywhere. That’s why the red line laid out in Bolton’s statement is so frightening to national security experts familiar with these men’s views. “The fact that those actions take place, if they do, by some third-party proxy, whether that’s a Shia militia group or the Houthis or Hezbollah, we will hold the Iranians—Iranian leadership—directly accountable for that,” Pompeo told reporters while traveling to Finland this week. The groups he identified often come into conflict with Saudi Arabia and Israel, the United States’ two strongest allies in the region. Whether their encounters qualify as a proxy attack on American interests is for presumably Trump and his advisers to decide.

“We’re closer to war with Iran now than we’ve been at any time since the summer of 2010,” says Joe Cirincione, the president of the Ploughshares Fund, a global security foundation. “Any spark in the region could set off this fire.”

On Wednesday, Iranian President Hassan Rouhani announced the country’s partial withdrawal from the nuclear deal unless its signatories arrived at a new compromise within 60 days. The move left Europe in an awkward position, stuck between letting the 2015 agreement collapse and incurring the wrath of Trump’s sanctions.

“I don’t think that the pressure is designed to bring the US to the negotiating table,” says Emma Ashford, who studies the Middle East and international security at the libertarian Cato Institute. “It’s designed to work around the US in a situation where the Iranian leadership doesn’t perceive any ability of working with the US.”

If Trump’s evolution on North Korea is any clue, he is not averse to abandoning “fire and fury” in pursuit of a breakthrough with a hostile regime. Once dictator Kim Jong Un agreed to meet with him last year in Singapore, Trump went from mocking him as “Little Rocket Man” to praising him as “very talented.” He’s laid the groundwork for a similar about-face with Rouhani. After threatening his Iranian counterpart with consequences “THE LIKES OF WHICH FEW THROUGHOUT HISTORY HAVE EVER SUFFERED BEFORE” on Twitter, Trump invited him to meet eight times—Iran says he rejected every invitation—and called him, in another tweet, “an absolutely lovely man.”

The flexibility Trump so prizes in his negotiating style was missing in Hanoi, when the second Kim-Trump confab failed after the United States refused to grant partial sanctions relief in return for incremental action from North Korea. It would presumably be missing in any conversation with Iran, too. The moderate, incremental option went out the window when Trump abandoned the 2015 nuclear deal. The foundation of Trump’s rejection of that deal was the belief it didn’t go far enough.

Brian Hook, the US special representative to Iran, hinted at the Americans’ intransigent position during his remarks on Wednesday at the Center for Strategic and International Studies, a defense think tank in Washington, DC. He wouldn’t say whether there were any preconditions to talks with Tehran, but hanging over any future negotiation would inevitably be the 12 requirements Pompeo outlined last year as a framework for another American deal with Iran. No reasonable observer expects Iran to accede to all these demands, but Hook left no moderate options on the table. “We don’t want to give Iran veto power over our national security,” he said.

That’s a noble goal, but any deal is incumbent on Iranian involvement, and it’s not clear how Iran could expect its American interlocutors to be negotiating in good faith. “They want Iran to be like Japan at the end of World War II,” Cirincione says. “It’s the codification of regime change.” Pompeo privately denies this. In a closed-door meeting last month with Iranian-American leaders, he reportedly said the United States is “not going to do a military exercise inside Iran” to spur regime change, according to Axios. Bolton has struck a far harsher tone. In February, he filmed a menacing video on Twitter to mark the 40th anniversary of the Iranian Revolution. “For all your boasts, for all your threats to the life of the American president, you are responsible for terrorizing your own people,” he told Supreme Leader Ali Khamenei. “I don’t think you’ll have many more anniversaries to enjoy.”