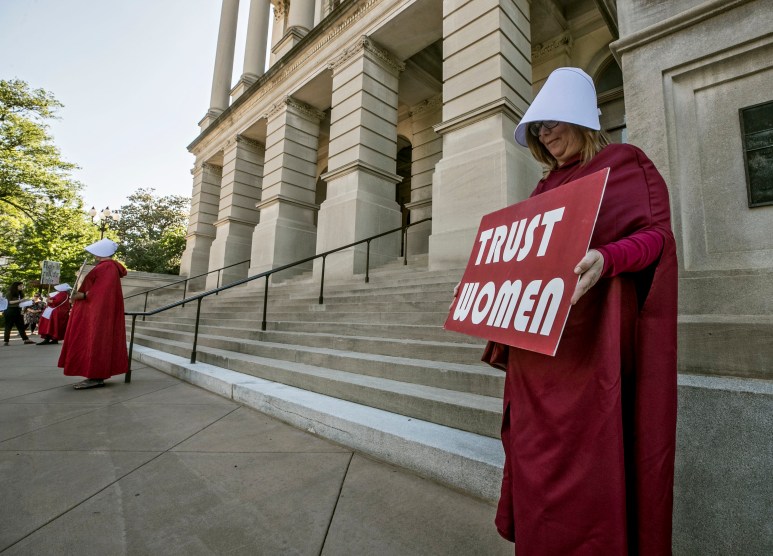 Demonstrators dressed as characters from "The Handmaid's Tale" protest outside Georgia's Capitol, where Gov. Brian Kemp was to sign anti-abortion legislation on May 7.Bob Andres/Atlanta Journal-Constitution via AP

Lawyers from the ACLU, the Center for Reproductive Rights, and Planned Parenthood filed a lawsuit Friday against the state of Georgia to block an anti-abortion law passed earlier this year.

The law bans abortion after the six-week mark, which is often before someone would be aware of a pregnancy, and is scheduled to go into effect on January 1.

Georgia is one of nine states—along with Kentucky, Louisiana, Missouri, Mississippi, Louisiana, Alabama, Utah, and Arkansas—that have passed strict limits on abortions within the past year.

“None of these laws are in effect, and we are fighting to keep it that way,” said Center for Reproductive Rights CEO Nancy Northup in a statement. “For nearly half a century, the Supreme Court has protected the right to abortion, and we know the majority of Americans continue to support abortion access.”

The lawsuit alleges that Georgia’s ban on abortion after six weeks is unconstitutional under the Supreme Court’s Roe v. Wade decision.

“This legislation is blatantly unconstitutional under nearly 50 years of US Supreme Court precedent,” said Sean J. Young, legal director of the ACLU of Georgia in a statement. “Politicians have no business telling women or a couple when to start or expand a family.

Opponents of the six-week ban also point to the high maternal and infant mortality rates in Georgia to argue that the state should be focused on improving maternal health care rather than limiting abortion access. In 2010, Amnesty International flagged Georgia as the state with the highest maternal mortality rate.

“In a state with a critical shortage of medical providers and some of the highest rates of maternal and infant deaths, especially among Black Georgians, politicians should focus on expanding access to reproductive care, not banning abortion before someone even knows they’re pregnant,” said Talcott Camp, deputy director of the ACLU Reproductive Freedom Project.