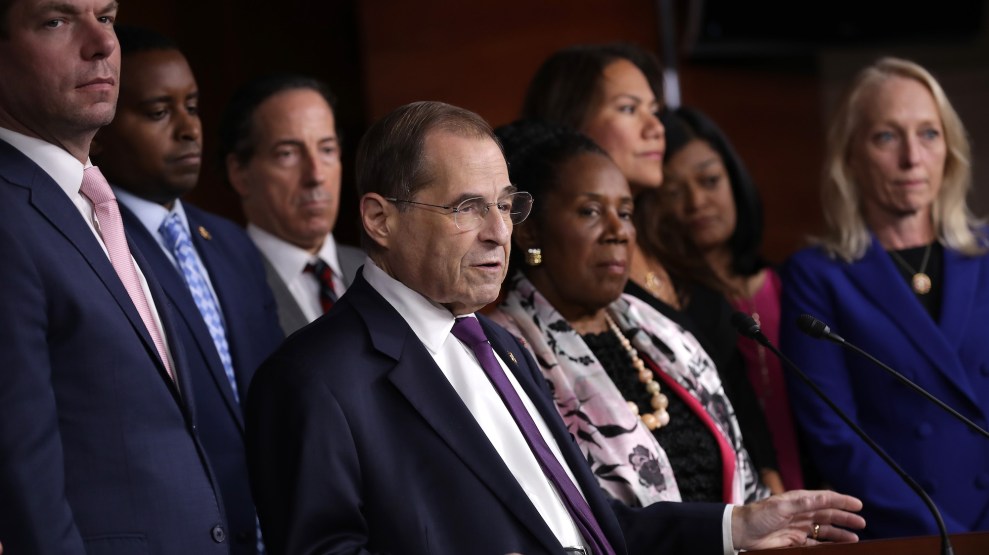 For months, Democrats have debated whether the House of Representatives should open impeachment proceedings against President Donald Trump. But on Friday, key House Democrats declared that such a probe is already underway. It’s a semantic distinction with serious political significance. It could also have major legal implications as Democrats fight to obtain documents that the administration has so far refused to hand over.

“I would say we are in an impeachment investigation.”

The House Judiciary Committee is “in effect” already conducting an impeachment inquiry, the panel’s chairman, Jerrold Nadler (D-N.Y.), said during a press conference, referring to hearings it has conducted regarding former special counsel Robert Mueller’s Russia investigation. Nadler said that impeaching Trump is among the actions that Democrats are weighing to address the president’s misconduct—despite the fact that there has been no House vote to initiate an impeachment inquiry.

Nearly 100 House Democrats have already said they support opening an impeachment inquiry, often in an apparent attempt to stake out a middle ground between inaction and full-blown support for impeaching Trump.

I support a formal inquiry to determine whether or not the President's conduct warrants bringing articles of impeachment.

I have not prejudged the outcome. I believe in the integrity of the process & that it's my duty under the Constitution to ensure nobody is above the law. pic.twitter.com/ddYBhZeh15

But while these calls may serve a political purpose, Judiciary Committee members and aides said Friday that an “impeachment inquiry” is not a meaningful legal concept. They say the steps the committee has already taken, including holding hearings into Trump’s alleged obstruction of justice, achieve the same purpose that initiating such an inquiry would serve.

Democrats invoked the I-word in a court filing Friday seeking to force the Justice Department to hand over grand jury material compiled by Mueller, who testified on Wednesday before the House Judiciary and Intelligence committees. “Because Department of Justice policies will not allow prosecution of a sitting President, the United States House of Representatives is the only institution of the Federal Government that can now hold President Trump accountable for these actions,” the Democrats’ motion says. “To do so, the House must have access to all the relevant facts and consider whether to exercise its full Article I powers, including a constitutional power of the utmost gravity—approval of articles of impeachment.”

Because they are considering impeachment, Democrats contend, they have the authority to obtain otherwise secret grand jury material, which Attorney General William Barr has refused to help them obtain. As legal scholar Joshua Matz wrote Friday in the Washington Post, it is “settled law that House committees can obtain grand jury materials as part of impeachment investigations.”

If the committee ultimately does vote to approve articles of impeachment based on its investigation, the matter would then go to the House floor. If a majority of the full House votes to impeach, the case would then move to the Senate, where a two-thirds majority would be necessary to remove Trump from office.

Democrats said Friday they also plan to file suit to compel former White House counsel Don McGahn to testify before the committee. McGahn, who is quoted extensively in the Mueller report’s discussion of Trump’s efforts to fire Mueller and hinder the investigation, has refused to cooperate with the panel based on a White House claim that McGahn enjoys “absolute immunity” from testifying. Democrats say that argument is legally baseless.

Some pundits and legal scholars have argued that an official House vote declaring that lawmakers are conducting an impeachment inquiry would give Democrats more power to enforce subpoenas against the executive branch. But Judiciary committee members and lawyers argued Friday that they already have ample authority without such a vote. “We don’t think a judge cares,” a committee lawyer said.

Rep. Jamie Raskin (D-Md.), a former constitutional law professor, said that there is “no formal constitutional authority or statute or even House rules” that define when an impeachment inquiry exists. What matters is simply that members are pursuing an investigation that could ultimately lead to an impeachment vote—something they say is already happening.

“I would say we are in an impeachment investigation,” Raskin added.

“We’re crossing a threshold with this filing,” Rep. Veronica Escobar (D-Texas), another committee member, said. “We’re now officially entering into an examination of whether or not to recommend articles of impeachment.”