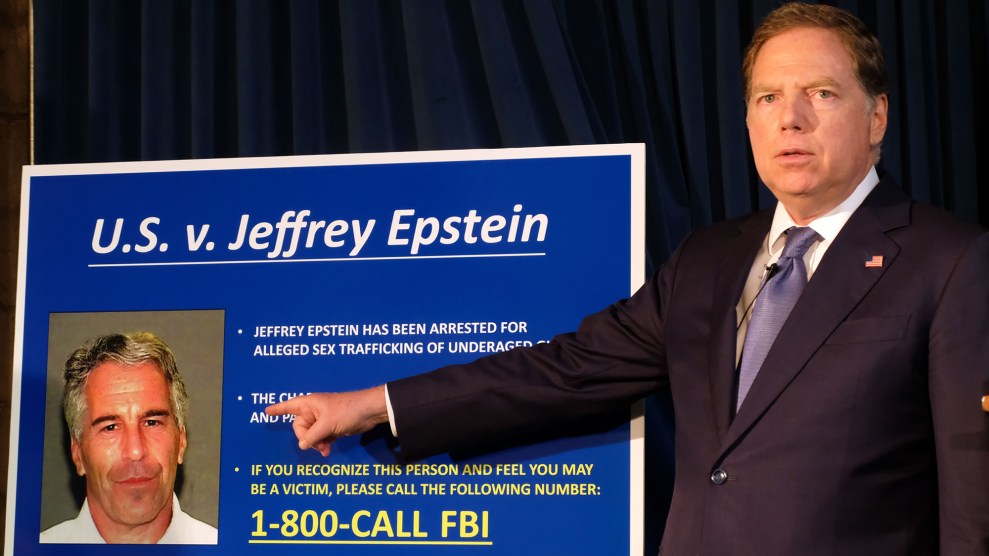 US attorney Geoggrey Berman points to a picture of Jeffrey Epstein during a press conference after Epstein's arrest in downtown Manhattan on July 8, 2019. Luiz C. Ribeiro/New York Daily News/TNS via ZUMA

Federal prosecutors in New York are asking a federal judge to deny bail to Jeffrey Epstein while he awaits trial for sex trafficking and conspiracy charges. Prosecutors warn that not only is Epstein a danger to the community, but also that he may marshal his vast wealth to flee the country and try to manipulate witnesses against him.

He “has a history of obstruction and manipulation of witnesses,” prosecutors wrote to the judge.

He “has a history of obstruction and manipulation of witnesses,” prosecutors wrote to the judge, Richard Berman, on Friday. This includes wiring $350,000 to two potential witnesses against him late last year, prosecutors warned.

In the letter, prosecutors outline intimidation tactics employed by Epstein going back to a criminal investigation into allegations of sexual abuse against children in Florida more than a decade ago. They allege, based on contemporaneous police reports, that Epstein was involved with efforts to intimidate his accusers. When Epstein faced civil suits in Florida, prosecutors wrote, he attempted to buy victims’ silence. In one police report from the time, cited by prosecutors, one victim “reported having been told: ‘Those who help him will be compensated and those who hurt him will be dealt with.'”

Prosecutors allege that Epstein may have tampered with witnesses in the past several months. Last November, the Miami Herald reported on Epstein’s alleged sex-trafficking, abuse, and the sweetheart deal he got from prosecutors in 2008, which included a non-prosecution agreement (NPA). Days later, Epstein wired $350,000 to two people who would be in a position to testify against him.

Those payments, prosecutors say, show that Epstein was likely “attempting to further influence co-conspirators who might provide information against him in light of the recently re-emerging allegations.”

In an indictment unveiled on Monday, prosecutors charged Epstein, 66, with luring dozens of underage girls to his homes in Manhattan and Palm Beach, where he sexually abused them and also pushed them to recruit new victims. In the letter to the judge on Friday, prosecutors said the case against Epstein, already robust, is growing stronger every day.

“Just since the Indictment was unsealed, several additional women, in multiple jurisdictions, have identified themselves to the Government as having been victimized by the defendant when they were minors,” the prosecutors said. In the last few days, the government has seized a large volume of photographs of naked women and girls, and that claims that “dozens of individuals have called the Government in recent days to convey information regarding the defendant and the allegations.”

A bail hearing for Epstein is scheduled for 10 am Monday.