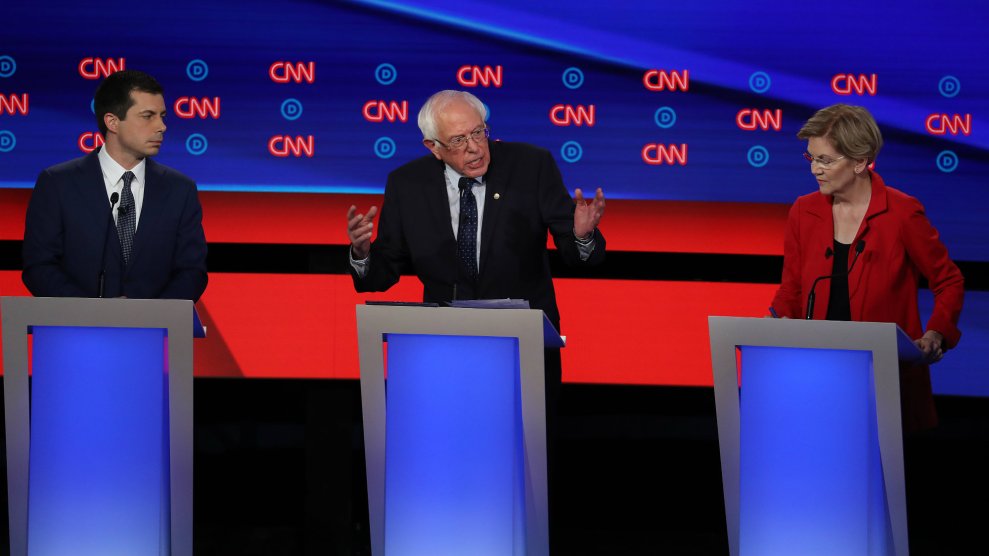 The Democratic National Committee on Thursday voted not to hold an official debate dedicated to discussing global warming, once again rejecting a longstanding demand from activists who argue that the climate crisis has gotten short shrift during the presidential primary campaign.

But the DNC’s resolutions committee also voted to advance a measure that—if approved Saturday—would encourage candidates to participate in forums at which they’d appear onstage simultaneously with their rivals. The practical impact of that resolution remains unclear, but in theory, it could help pave the way for an independent organization to host a climate debate later this year.

As the Hill reported:

The committee passed Resolution 4, an amendment that would in part allow for candidates to appear side by side on stage to have a discussion on a single issue, such as climate change.

Supporters of a climate debate believe the language will allow future unsanctioned climate debates to occur and could open the door for networks like CNN and MSNBC to modify their coming climate forums to debates.

For activists in the Sunrise Movement, an advocacy group that has been calling on the DNC to hold a climate debate, it’s a “partial victory.” Previously, the party had said it wouldn’t allow candidates to participate in outside debates and would disqualify anyone who did from the DNC-sanctioned debates. One of the loudest voices calling for such a debate was Washington Gov. Jay Inslee, who made climate the focal point of his long-shot presidential bid and in June said he wouldn’t rule out participating in an independently organized climate debate in defiance of the DNC ban. Inslee withdrew from the race on Wednesday.

Since April, the campaign for a climate debate has grown from a far-fetched request from environmentalists and Jay Inslee to scoring endorsements from nearly the entire primary field.

But Perez has been reluctant to hold a climate debate, fearing it would lead to a proliferation of single-issue debates, when there are already a dozen opportunities for candidates to discuss climate in upcoming debates.

Climate activists intend to keep the pressure on. “We’ll keep fighting,” said Sunrise spokesperson Sofie Karasek in a statement, “to make sure the DNC and Tom Perez treat the climate crisis like the emergency that it is, and give it the airtime and attention that it deserves.”