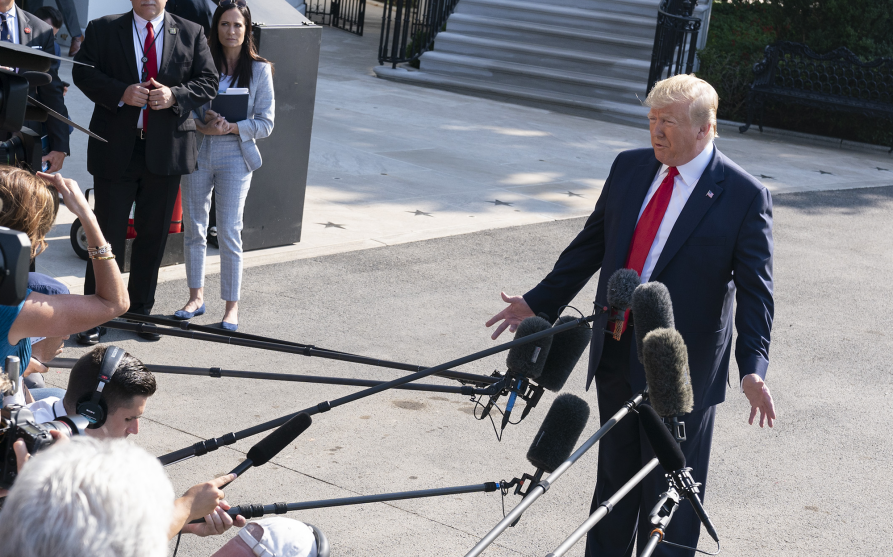 It wasn’t the full-blown, sneering meltdown that came to life at Trump Tower just after 2017’s white supremacist rally in Charlottesville, Virginia. But on Wednesday, as President Donald Trump departed the White House to visit the sites of two massacres that killed 31 people, he used words that called to mind one of the most incendiary and divisive moments of his presidency.

“I am very concerned about it and I’ll do something about it.”

The remarks came shortly after the president noted reports that the shooter in Dayton, Ohio had a history of supporting left-wing lawmakers. “He was a fan of Bernie Sanders and Elizabeth Warren, nothing to do with Trump. Nobody ever mentions that.”

In calmly offering the words, Trump may not have looked like the same man who viciously shouted down reporters as they questioned his response to the violence in Charlottesville. But almost two years to the day when he memorably equated white supremacists with their protesters, Trump’s message in the face of hate was the same: The suspected El Paso gunman—who reportedly wrote a racist manifesto mirroring Trumps’ own anti-immigrant rhetoric—might be evil, but so are Americans opposed to his racist violence. If Trump had any concern for the rise of white supremacy, he went out of his way to equate it to a far-left protest group with little liberal support and with no history of mass killings.

After Trump found himself widely accused of having incited racist, violent acts, he labored to drag his political opponents into the mud alongside him. By highlighting one of the shooter’s links to prominent liberals and drawing a familiar moral equivalency around the other, the president on Wednesday again signaled he had no intention of embracing the role of healer-in-chief—even if he was due to play one on television in just a few hours.

“You also had people that were very fine people, on both sides,” Trump had insisted in 2017. “What about the alt-left that came charging at the, as you say, alt-right?” Two years later, he’s still asking the same questions.

"I am concerned about the rise of any group of hate." pic.twitter.com/fkESxbW6xb