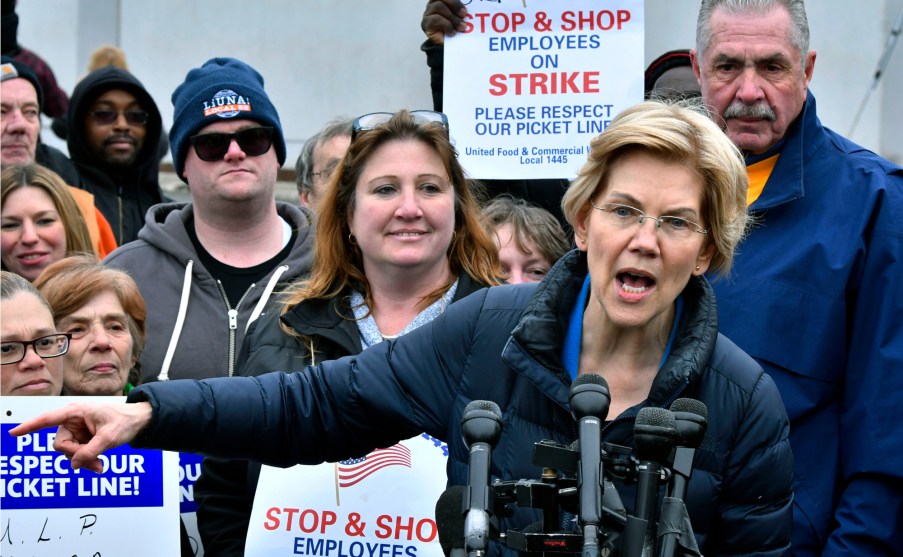 Just two weeks after she joined the picket line outside a General Motors assembly plant in Detroit, Senator Elizabeth Warren on Thursday morning released a wide ranging labor plan, which promises to tackle an overarching problem: “American workers don’t have enough power.” The 14-page document, significantly longer than both Vice President Joe Biden’s and Senator Bernie Sanders’ plans, includes provisions to protect union workers, independent contractors, and employees that have historically been discriminated against, such as LGBTQ people, people of color, people with disabilities and pregnant people.

On the first day of a Warren administration, the Massachusetts Democrat promises to sign an executive order mandating a $15-an-hour minimum wage for federal contractors. She intends to eventually extend that minimum wage to all workers—including tipped workers—through federal legislation.

The plan also calls for the passage of legislation that allows public sector workers, graduate students, gig-economy workers, farm workers, domestic workers, home care workers, and some managers to unionize. Like her fellow presidential frontrunners Biden and Sanders, Warren recommends repealing right-to-work laws (which gut union funding) and prohibiting companies from permanently replacing workers on strike. But she takes it a step further with promises to strengthen enforcement authority of the National Labor Relations Board and appoint “a demonstrated advocate for workers to fill any Supreme Court vacancy.”

The workers of @UAW are fighting for fair wages and good benefits—and I have their backs. When unions win, all workers win. pic.twitter.com/xC2di0jzLH

“We cannot have a truly democratic society with so little power in the hands of working people,” Warren writes in the plan. “We cannot have sustained and inclusive economic growth without a stronger labor movement. That’s why returning power to working people will be the overarching goal of my presidency.”