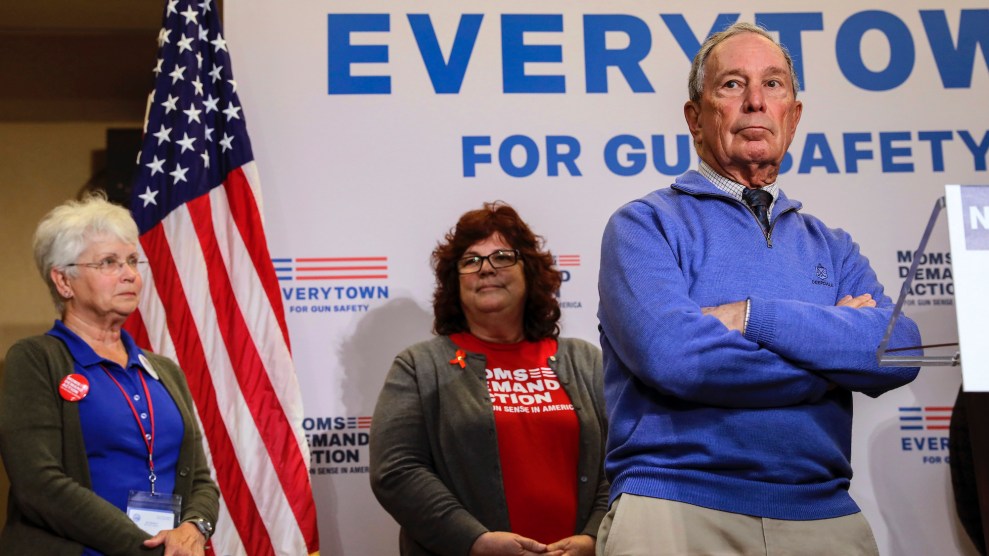 The leaders of Moms Demand Action state chapters and local groups received the news from Aimee Tavares, a senior national organizing director for the group, who sent an email roughly three and a half hours after news broke that Bloomberg would formally announce his candidacy. “Given his unique role in launching Everytown, his leadership in advancing the cause of gun safety, and the significant investments he’s made in helping to grow our movement, Mayor Bloomberg’s campaign is temporarily renting access to our list of supporters so they can communicate his plans for achieving our shared goal of a nation free from gun violence,” Tavares wrote.

Tavares added the campaign would not retain access to Moms Demand Action’s email list at the conclusion of Bloomberg’s bid. Members of the group would be “under no obligation to take any action” in response to Bloomberg’s campaign missives, and that “it is entirely up to our volunteers how they spend their volunteer time in this election and which candidates they choose to support, up and down the ballot,” she wrote.

Tavares’ email gave no endorsement of Bloomberg’s candidacy, but noted that “his participation will ensure that our issue remains at the forefront during the remainder of primary season.” In a Twitter thread announcing his candidacy, Bloomberg shared that he had “founded the largest gun safety group in history” alongside a photo of him posing with Moms Demand Action volunteers.

Listen to Kara Voght describe how Michael Bloomberg’s access to a vast email network could help his campaign get off the ground, on this episode of the Mother Jones Podcast:

In a statement, a spokesperson for Everytown confirmed that Bloomberg’s campaign would use the list, but did not say on what terms or whether Moms Demand Action volunteers had been consulted about the decision to share the list, which has been built through the group’s nonpartisan, single-issue efforts. “Given that Mayor Bloomberg is our co-founder and has dedicated his life’s work to taking on the NRA and elevating the issue of gun safety, his campaign is temporarily renting access to our list of supporters so he can communicate with those who also support and helped build this movement,” the statement said.

Moms Demand Action evolved out of a Facebook group that Shannon Watts, then an Indiana-based public relations professional and mother of five, started with other concerned parents in the wake of the 2012 Sandy Hook massacre in Newtown, Connecticut. In the years that followed, the group became one of the most visible forces in the fight for stricter gun laws.

In 2013, Moms Demand Action joined forces with Bloomberg—who as New York mayor founded Mayors Against Illegal Guns—under the banner of Everytown for Gun Safety, with aims of creating a counterforce to the National Rifle Association. The organization’s website boasts 350,000 donors, 6 million supporters, and chapters in 50 states. Its volunteers have been active in promoting gun-control positions in House, Senate, and state legislative races, and its political arm, Everytown for Gun Safety Action Fund, endorses and makes donations to candidates up and down the ballot. Bloomberg does not currently have a formal role with the organization but provides roughly a third of its funding.

Bloomberg is not the first candidate to rent an email list from the nonprofit he supported. Fellow billionaire philanthropist, Tom Steyer, has periodically used the email lists of NextGen and Need to Impeach, two groups he founded, to grow his presidential campaign. The effort helped Steyer, a late entrant into the 2020 race, amass enough unique donors to qualify for the October and November debates.

The role that Everytown and Moms Demand Action would take in the face of a Bloomberg run has been a subject of speculation for some time. Watts anticipated those concerns in an email to Moms Demand Action leaders late last week, explaining how the group came to work with Bloomberg and Everytown. “I spent months interviewing people and organizations inside and outside the gun violence prevention movement,” she wrote. “Ultimately, Mike was the only one who understood the inherent value of Moms Demand Action. He supported our mission, our strategy, and knew grassroots strength was what was missing from the movement.”

Watts said that Bloomberg’s entry into the race would “ensure gun safety remains front and center during the 2020 election season” but affirmed that nothing would be asked of its volunteers to support Bloomberg’s candidacy. “We are a single issue organization—but none of us live single issue lives,” Watts wrote. “I want to be clear that it is entirely your choice regarding how you spend your volunteer time in this election and which candidates you choose to support. Elevating the voices of all gun sense champions is part of what you do every day, and that should continue.”

Watts added that Bloomberg would have to take the same steps any other candidate has taken to earn the group’s “Gun Sense Candidate” distinction, an award given to candidates that support Moms Demand Action’s gun control platform. The distinction is not an endorsement, and 14 Democratic presidential candidates have received it so far. Everytown’s political arm will not look to endorse until much later in the cycle.