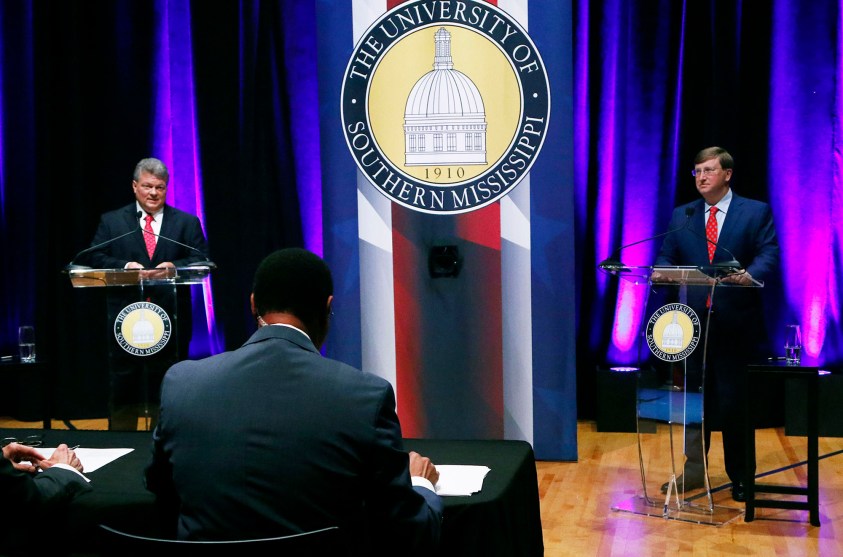 A tight governor’s race in Mississippi next Tuesday could come down to an obscure 19th-century state provision designed to keep power in the hands of white voters. But now a federal court has signaled that it could step in and even overturn the results if the Jim Crow-era provision determines the outcome of the race.

The provision, which was adopted into the state’s constitution in 1890, says that in order to win a statewide race, a candidate must win the majority of the popular vote and the majority of the state’s 122 House districts. That’s a far higher bar to clear, and if no candidate does so, the state House of Representatives gets to elect the winner. The state House is controlled by Republicans. The provision was created to rein in the growing political power of black Mississippians during Reconstruction, alongside poll taxes and literacy tests.

“This racist electoral scheme achieved, and continues to achieve, the framers’ goals by tying the statewide election process to the power structure of the House,” states a lawsuit challenging the provision. “So long as white Mississippians controlled the House, they would also control the elections of statewide officials.”

No other state uses such a process. It has rarely led to a vote in the state House; the last one was in 1999.

Republican Lt. Gov. Tate Reeves and Democratic Attorney General Jim Hood are locked in a close contest for governor, with polls showing Reeves in the lead by only 1 to 3 points. As the race got underway this spring, four black voters filed a lawsuit against Mississippi’s top elections officer, Secretary of State Delbert Hosemann, and House Speaker Philip Gunn to challenge the provision. The suit was backed by the National Democratic Redistricting Committee, an organization led by Eric Holder, the first black attorney general.

On Friday, US District Judge Daniel P. Jordan III declined the plaintiffs’ request to issue a preliminary injunction against the state that would block the provision from being applied to Tuesday’s race. Jordan cited the timing of the case, noting that Mississippi’s election laws “are not merely statutes that can be revised in one legislative session; they are constitutional provisions that require amendment.”

But Jordan expressed “grave concern” regarding the constitutionality of the provision, stating that it would cause “irreparable harm if eventually applied.” Jordan wrote that the provision is the state’s responsibility to change, but he suggested that if it failed to do so and the results of the election were determined by the legislature, it might give the plaintiffs legal standing to move forward with the suit and potentially overturn the provision in court.

Attorneys for the plaintiffs in the case argued that Mississippi is currently gerrymandered to dilute the black vote, and that forcing statewide candidates to win a majority of these skewed congressional districts would violate the principle of “one person, one vote.” Jordan wrote in his decision that this was “arguably…their strongest claim.”

Rep. Bennie Thompson (D-Miss.) told NPR prior to the judge’s ruling, “Whether it was the poll tax or the Black Code, there were a lot of things put in place [that] down through the years have been declared unconstitutional. To our knowledge, this is the last vestige of Southern discrimination in the electoral process.”