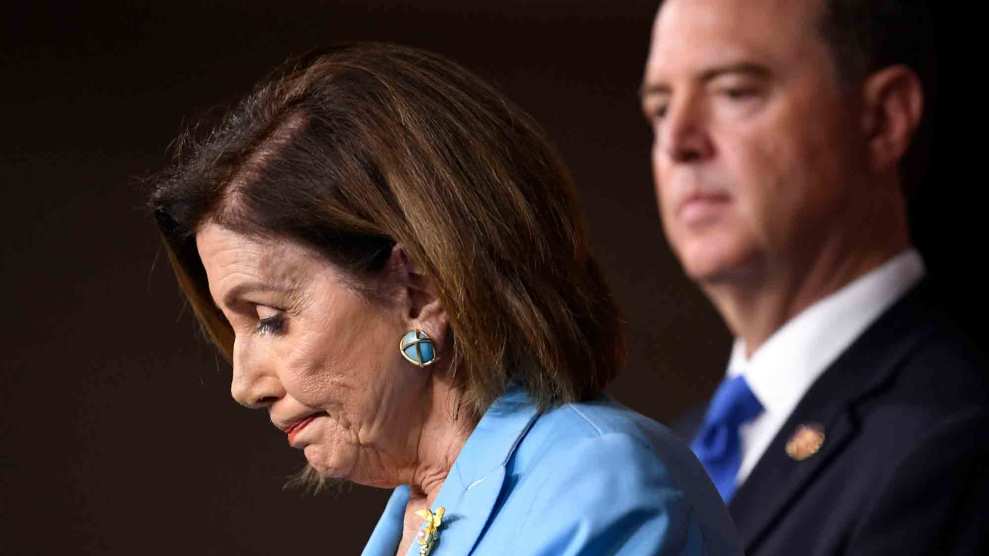 That’s the mantra for the House Democrats, as they take their impeachment inquiry into a new phase: public hearings. For weeks, the House committees leading this effort—the intelligence, foreign affairs, and oversight committees—have narrowly focused on one matter: the Trump-Ukraine scandal and the tale of Donald Trump apparently abusing the office of the president to obtain political dirt that could influence the 2020 election. Sure, there are a lot of other issues that Democrats have previously raised as possible grounds for impeachment—Trump allegedly obstructing justice (per the Robert Mueller report), Trump regularly violating the emoluments clause of the Constitution, Trump separating children from their parents at the border, and more—but House Speaker Nancy Pelosi and her leadership team determined that their best bet was to zero in on one episode of wrongdoing and leave the rest alone. “It’s the KISS strategy,” one senior House Democratic staffer says. “Keep it simple, stupid.” And as one House Democrat puts it, the goal is a “medium-sized impeachment.” Nothing too elaborate, nothing too hard to follow. After the somewhat complicated Trump-Russia scandal fizzled politically, Pelosi and her crew want to base impeachment on a straightforward and comprehensible narrative. Avoid tangential plots and the need for timelines, flowcharts, and complex explanations. Don’t get hung up on the past and the 2016 election. Skip all the Russia stuff—and don’t mention Mueller ever again. Trump tried to extort a foreign government to screw with the upcoming election—and that’s impeachable enough.

So far, this impeachment-lite strategy appears to be working in that public opinion polls show majority support for the Democrats’ impeachment project. But it does run a risk of providing Republicans in the Senate, who will have to render a judgment if the House Democrats successfully impeach Trump, what could be an easy way out.

Through the first eight months of 2019, Pelosi resisted the mounting calls within her own caucus for impeachment. Though there were solid arguments for initiating such a proceeding—including Trump’s refusal to comply with congressional investigations (which was one of the three articles of impeachment passed by the House Judiciary Committee in 1974 pertaining to Richard Nixon)—Pelosi and other top Democrats feared that the 41 House Democrats representing congressional districts where Trump won in 2016 could face the wrath of voters if they voted to impeach a president a majority of their constituents had chosen. And that could threaten Democratic control of the House. The Dems also had concluded that the Russia investigation was no longer of much interest to many voters and that Mueller’s report and his half-hearted testimony before Congress had not established a solid foundation for the argument that Trump should be removed from office. To some degree, this was a result of the Democrats’ own failure to convey the full and compelling narrative of that scandal. They held no series of hearings on the matter. They never figured out how to sidestep Trump’s trap, in which he defined the controversy as being only a matter of direct collusion. They blew an important opportunity. Even when it was reported that Trump, abandoning his constitutional duty to safeguard the nation, had told Moscow’s emissary during a May 2017 Oval Office meeting that he didn’t care about Russia’s attack on the 2016 campaign, there was no organized outrage from the Democrats’ leaders. They had decided voters didn’t care about that whole Russia thing, and impeachment was off the table.

The Ukraine revelations changed all that. When the news broke that Trump had pressured the Ukrainian president to mount investigations to produce dirt on Joe Biden and his son, Hunter, and to yield information that would buttress a crackpot conspiracy theory holding that Russia did not hack the 2016 election, the impeachment damn in the House broke, and Pelosi and her colleagues essentially said, Now we got him. Quid pro quo, extortion, bribery. All summed up in one line: “I would like you to do us a favor though.” Despite the obfuscation, diversion, and distraction hurled by Trump and his cultist defenders, this caper was indeed a simple story. The quasi-transcript released by the White House implicated Trump—and all the subsequent evidence and accounts backed up the main accusation that Trump had exploited his office to muscle a foreign leader for his own underhanded political advantage. At this point, Pelosi grabbed on to these disclosures and declared, This is something we can work with!

Within the House Democratic caucus there was—and there continues to be—a debate over whether the impeachment of Donald Trump also ought to include other matters. Should the Democrats showcase the Ukraine affair as an example of Trump’s perfidy and tie it to the other abuses his critics have identified long before anyone knew the name of Volodomyr Zelensky? Or should they not pile on side plots and additional charges of constitutional wrongdoing? This conversation is continuing among Democrats within the House. And it is partly colored by pragmatic concerns. Pelosi and other leading Dems are looking to pursue an expeditious impeachment. Get this thing done with ASAP so voters don’t come to see the Democrats as bent only on revenge and obstructionism—and so any Senate trial isn’t pushed too far into the coming election year. With the holidays approaching, the House doesn’t have many working days in order to wrap up an impeachment. A one-story-only impeachment has a better chance of being accomplished in this short timeframe. Explaining Trump’s violation of the emoluments clause, his various alleged acts of obstruction, and everything else—through further congressional investigation, reports, hearings, and the lawsuits necessary to force recalcitrant witnesses and the White House to comply with congressional subpoenas—would take time. Perhaps a lot of time. (There is so much to cover!) So if the best impeachment is a fast impeachment, then the Dems need a compact short story to present to the public, not a grand sweeping epic. Call it a modest impeachment. There is still a chance the more-than-Ukraine Democrats will somehow attach Trump’s other misdeeds to the impeachment train. But time and the desire for simplicity is against them.

One curious aspect of the political dynamic underlying a no-frills impeachment is that this just-the-Ukraine-facts approach could also help Trump and the Republicans. Already Trump’s defenders have moved toward an is-this-all-you-got defense, with some Republicans conceding the Ukraine business doesn’t look good but insisting it’s not impeachable. Look for this to become a mainstay for Trump’s champions: the Democrats have been investigating Trump for almost a year, and all they turned up was one lousy phone call with perhaps one teeny-weeny quid pro quo. They will contend that such a misstep—if it even counts as a misstep—does not warrant overturning the popular will (that is, the Electoral College). And they will combine this with another obvious argument: certainly, this possible error ought not lead to the political death penalty in an election year when the American people themselves will soon be able to render their own verdict. Should Trump be impeached and a trial be held in the Senate, you can expect Republican senators to loftily proclaim that they will not substitute their own judgments for the wisdom of the voters. And the closer any trial comes to Election Day 2020, the louder this argument will be exclaimed.

There are obvious counters to these obvious Republican defenses. (Why allow a president who has used his office to try to subvert an election to remain in office?) But a medium-sized impeachment—one that ducks the totality of Trump’s misconduct—could provide the Republicans greater opportunity to fast-track a trial, quickly dismiss the entire mess, and offer what Trump will embrace as a clean bill of health. Still, if that’s the scenario that plays out, Trump will be stained—and perhaps so will some Republican senators who stick with him (depending on how the case is presented). Yet at this stage, there is no telling what the ramifications will be for the 2020 election. You can now game out it assorted ways—it helps Trump, it hurts Trump, it makes no difference. This election is likely to be shaken, rocked, and rolled by a variety of factors that no one, no matter how strong a sense of imagination they possess, can predict at this point.

With time running out, Pelosi and the House Democrats are going into a historic political battle with the impeachment they have. It’s too late for them to rewind and rerun the past eight months to set up a more comprehensive case. They have decided that to go big—what’s bigger in American politics than a presidential impeachment?—they must go small.