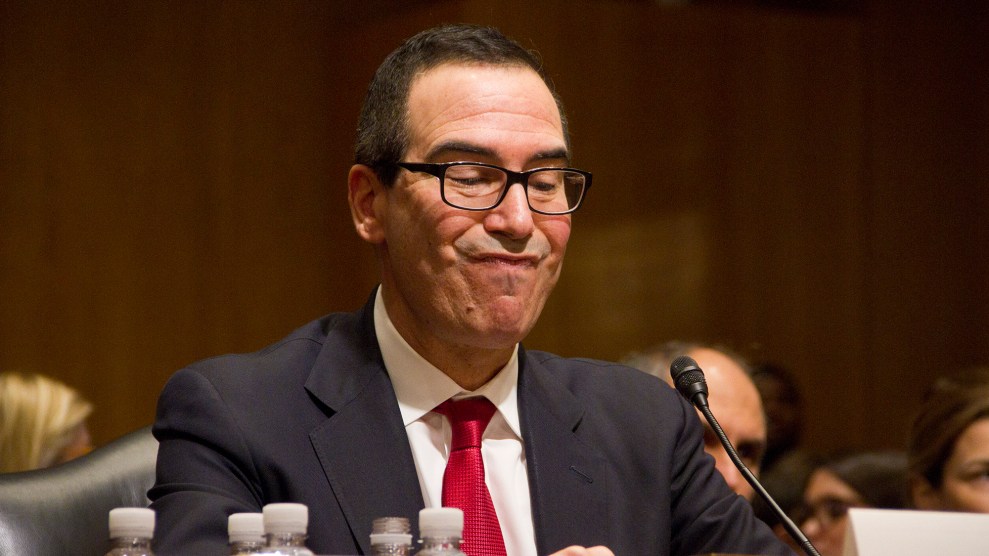 Some of the same men who profited big-time off of predatory foreclosures during the Great Recession are now in Trump’s inner circle. They serve in his cabinet and count themselves among his best friends.

Reveal’s Senior Reporter Aaron Glantz has spent a decade untangling the threads of the mortgage crisis that triggered the 2008 crash—and its aftermath. He chronicles the results of his reporting in his recent book, Homewreckers, which profiles a cadre of men who made a killing during the housing crisis thanks to federal tax deductions and aggressive foreclosures.

Glantz joined the host of the Mother Jones Podcast Jamilah King for this week’s episode to look at how, in 2019, some of the greatest profiteers—including Steven Mnuchin, Wilbur Ross, Thomas J. Barrack, Jr., and Steve Schwarzman—are now in positions of enormous power to influence national housing policies as members of Trump’s inner circle.

The book opens in 2008, when 8 million homes were foreclosed on and flooded the market at steeply discounted rates. For the next eight years, from 2008 to 2016, home ownership continued to drop, hitting the lowest rate in 50 years.

“What happened to all these houses? They didn’t just disappear,” Glantz says. “Who’s winning when everyone else is losing? Who’s taking that wealth, who’s the beneficiary of this system, and how does that work?”

In the course of his investigation, Glantz met Sandy Jolly, a woman whose home had been foreclosed on by the bank of Trump’s current Secretary of the Treasury, Steve Mnuchin. Looking through her documents, Glantz spotted a pattern that he had seen in other property records of foreclosed homes in California.

“This was another house that had been foreclosed on by Steve Mnuchin’s bank, and sold to Tom Barrack’s company, and rolled into a mortgage-backed security,” Glantz explains. “And then when Tom Barrack moved on, the whole thing was bought by Steve Schwarzman’s company. And that’s another one of Donald Trump’s close friends. So it was all of these Trump people.”

Two of these players are now in charge. Steve Mnuchin is the Secretary of the Treasury and Wilbur Ross is the Secretary of Commerce. From these positions, they can help shape the future of federal housing policies, including the Community Reinvestment Act and the Fair Housing Act, which prevents housing discrimination based on race, religion, sex, or disability.