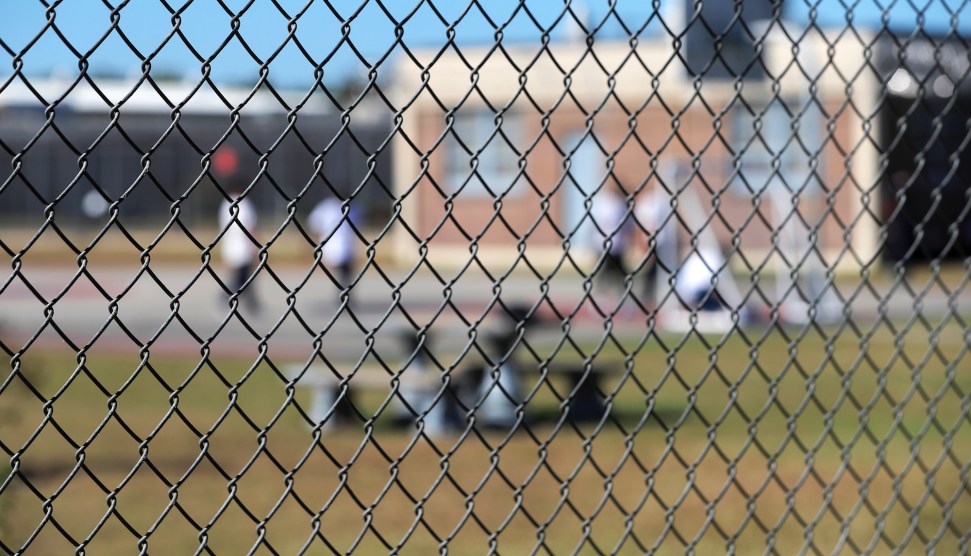 ICE detainees sit in a yard during a media tour of a Louisiana detention center in September. Gerald Herbert/AP

Immigration and Customs Enforcement is subjecting asylum seekers to forced feeding and hydration, despite widespread agreement among medical professionals that the practice is unethical and never justified.

Three men at ICE’s LaSalle detention center, a facility in Louisiana run by the for-profit prison company GEO Group, have been on a hunger strike since November 1, according to Freedom for Immigrants, an advocacy group that seeks to end immigration detention. The men are protesting to pressure ICE to release them so that they can fight their asylum cases from outside of detention. Bryan Cox, an ICE spokesman, says that as of Tuesday, 10 people in Louisiana were on hunger strikes, defined by the agency as missing at least nine consecutive meals.

Under the Trump administration, ICE has moved toward a policy of mandatory detention for asylum seekers as part of its effort to deter people from seeking protection at the southern border. ICE’s New Orleans field office, which covers Louisiana and four other Southern states, went from releasing 75 percent of eligible asylum seekers on parole in 2016 to 1.5 percent in 2018. In September, a federal judge ordered the agency to give asylum seekers detained in the Deep South a fair chance of release, but lawyers in the state have told me they’ve seen no evidence that ICE is complying. Asylum seekers detained in Louisiana say they’ve been pepper-sprayed and beaten for protesting their indefinite detention.

The World Medical Association, the international authority on medical ethics, has repeatedly stated that force-feeding mentally competent hunger strikers is never ethically acceptable. The American Medical Association and the International Committee of the Red Cross also oppose the practice. Ravina Shamdasani, a spokeswoman for the UN Office of the High Commissioner for Human Rights, said in February that force-feeding may violate the UN Convention against Torture.

One of the LaSalle hunger-strikers, who Freedom for Immigrants asked to be identified only by his first name, Suresh, said in a statement that he crossed the border on Christmas Day in 2018 after fleeing political persecution in India. Suresh is now being force-fed under a December court order issued by a federal judge in Louisiana that authorizes ICE to restrain him if he resists. A second LaSalle hunger striker is also being force-fed. The third—who asked to be identified by only his last name, Kumar, out of fear of persecution if he is deported—is receiving forced hydration but not forced feeding.

Michelle Graffeo, a social work student at Louisiana State University who regularly visits both men, has been leaving her home on Sundays at 4 a.m. to make the three-hour drive to the detention center. When we spoke last week, a day after she’d visited Suresh, she said he looked liked he was dying. He is wheelchair bound and does not have enough energy to move himself around, according to Graffeo.

Graffeo says the feeding tube that runs into his stomach was taped to his nose and that the area around it was infected. She says Suresh filled two coffee cups as he coughed and spat up stomach bile during the visit. He lost his asylum case and is now appealing.

Kumar, the hunger striker who asked that his first name not be used, is being hydrated against his will under a November court order. Speaking through a friend serving as an interpreter, he says he was restrained while medical personnel inserted an IV as guards in protective gear looked on. Kumar says he has lost about 50 pounds—nearly a third of his body weight—over the past year in ICE custody and that he has been using a wheelchair since early November. He says he is in pain all over his body.

Kumar did not apply to be released on bond after seeing fellow detainees get rejected, but he has told Freedom for Immigrants that he is willing to try as he awaits an initial decision in his asylum case. When we spoke last week, Kumar said he had just missed his 204th meal in a row. (Two other men at LaSalle who started hunger strikes in November recently began drinking nutritional shakes voluntarily, according to Freedom for Immigrants.)

Cox says that ICE involuntarily feeds and hydrates people in its custody only under court orders. “The short answer is such action is not an ICE decision and is only done if ordered so by a federal judge,” he writes in an email. Court records show that the Justice Department has sought the authority to force-feed and hydrate detainees on ICE’s behalf. Michelle Iglesias, a Texas doctor who has overseen force-feeding for ICE, said at an August court hearing that force-feeding hunger strikers is required by ICE policy to prevent people from starving to death.

ICE has the authority to release asylum seekers instead of detaining them. Nathan Craig and Margaret Brown Vega of the immigrant rights group Advocate Visitors with Immigrants in Detention in the Chihuahuan Desert say the agency wants to deter people from attempting hunger strikes to secure their release. Craig explains that ICE officials have told hunger strikers that they would only consider releasing them if they started eating again. The two advocates are now supporting a South Asian man detained in El Paso who has been on a hunger strike for nearly 60 days. Over the past year, Brown Vega says, ICE has subjected 16 El Paso hunger strikers to force-feeding. (An ICE spokeswoman in Texas did not respond to a request for comment.)

During the August court hearing, Iglesias said it takes at least 10 medical professionals and guards to force-feed a hunger striker by forcing a tube through the nose. As Texas Monthly reported:

“It looks like a plastic straw, the same diameter,” Iglesias, 37, told U.S. District Judge David Guaderrama…Six guards surround the detainee—one for each arm and leg, and one at each end of the bed—to respond to any resistance. As many as five other detainees, including fellow hunger-strikers, are in the same room as the sometimes-bloody procedure unfolds.

Iglesias acknowledged during the hearing that force-feeding hunger strikes is widely seen as a violation of medical ethics. “There wouldn’t be anyone in a hospital who would do it,” she said.

Parveen Parmar, a professor of clinical emergency medicine at the University of Southern California, said in an affidavit this summer that the medical treatment provided to Ajay Kumar, an Indian hunger striker in ICE custody, was “the worst medical care I have seen in my 10 years of practice.” In September, ICE released Ajay Kumar following a 70-day hunger strike.

Brown Vega stresses that ICE does not have to be detaining asylum seekers and that people should not be forced to resort to hunger strikes to try to get out of detention. “They’re put in this position because there’s no other way,” she says. “Because all other mechanisms have been closed.”