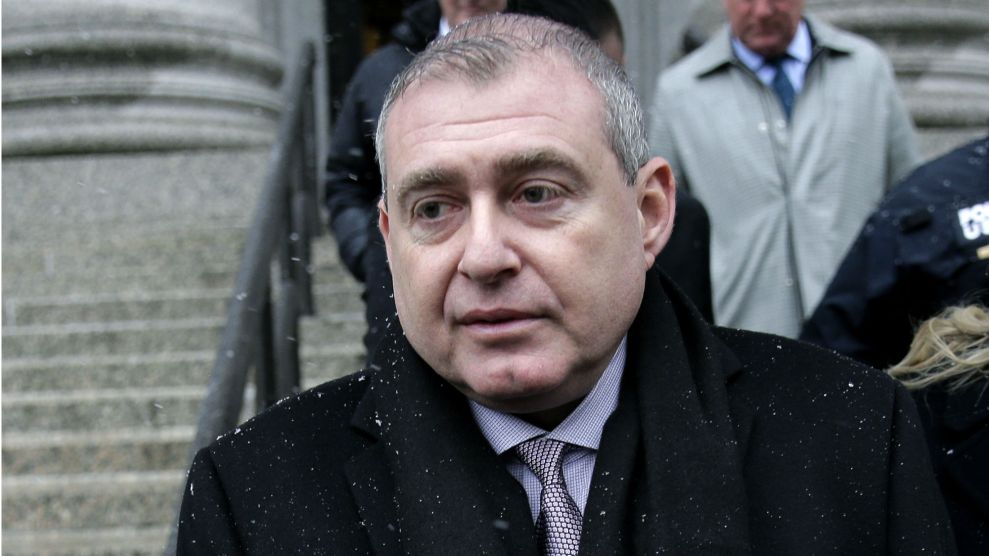 “President Trump knew exactly what was going on,” Parnas told Maddow. “He was aware of all my movements. I wouldn’t do anything without the consent of Rudy Giuliani or the president.”

"It wasn't just military aid. It was all aid," Parnas tells @maddow. "Basically the relationships would be sour. We would stop giving them any kind of aid, unless… there were several demands at the point — the most important one was the announcement of the Biden investigation." pic.twitter.com/DYwDUofVnl

But Parnas did not document many of claims, including those about Trump’s knowledge of his activities. (Parnas told the New York Times Wednesday that he not speak with Trump directly about his efforts, but that Giuliani told him Trump was up to speed.) And without more evidence, assertions by Parnas, who is struggling to stay out prison and clearly eager to court Trump’s critics, warrant significant skepticism. It is uncertain how his allegations may affect Trump’s Senate trial, which is set to start next week. Republican senators are largely opposed to hearing from witnesses or considering evidence outside the impeachment report House Democrats completed last month. And Parnas is not even among witnesses Senate Democrats have proposed calling.

Parnas, who was indicted in October for alleged campaign finance violations committed while cultivating top Republicans, worked closely with Giuliani, Trump’s lawyer, in an effort to pressure Ukraine to announce an investigation into Vice President Joe Biden’s role in the 2016 firing of a Ukrainian prosecutor suspected of corruption. Trump’s backers have claimed without evidence that Biden acted to stop an investigation into a gas company, Burisma, that had put his Biden’s son Hunter on its board. Such a probe might have helped Trump in the 2020 election, in the event Biden received the Democratic nomination.

As part of the scheme Parnas met with various Ukrainian officials. He told Maddow he would regularly call Giuliani, who, on speaker phone, would encourage Ukrainians to help Parnas by telling them Parnas represented Trump. Parnas also helped to engineer Trump’s removal of Marie Yovanovitch, the ambassador to Ukraine. Parnas said her ouster was a condition insisted on by Yuriy Lutsenko, at the time Ukraine’s prosecutor general. Yovanovitch had been sharply critical of Lutsenko’s failure to pursue corruption cases. The Biden investigation was the quid for the quo of Yovanovitch’s ouster, according to WhatsApp messages Lutsenko exchanged with Parnas, which were released Tuesday by House Democrats.

Parnas said that the vice president was part of the scheme to force Ukraine to announce a Biden probe. After Trump dropped a plan to attend Ukrainian President Volodymyr Zelensky’s inauguration in May, Pence was set to go instead. But when Ukrainian officials balked at announcing an investigation, Parnas said he warned them that Pence would not attend. When Pence did not go, Parnas said they took the demand for a probe more seriously.

Parnas told Maddow that Pence “had to know” about these machinations, given the vice president’s involvement in the region. “He couldn’t have not known,” Parnas said. Pence has denied any knowledge of the scheme.

Barr has tasked a subordinate, Connecticut US Attorney John Durham, with running an investigation into the origins of Special Counsel Robert Mueller’s investigation. Giuliani and Parnas had hoped to find information in Ukraine they could pass on to Barr and Durham that would discredit the Russia probe and help Trump politically. During their famous July 25 phone call, Trump had pressed Zelensky to share information with Barr.

Parnas also suggested that John Bolton, Trump’s former national security adviser, has vital information. Bolton, who has offered to testify in the Senate trial if he is subpoenaed, “was definitely involved in the loop,” Parnas said. “He knows what happened there,” Parnas added.

Senate Republicans have already voted to start Trump’s trial without seeking testimony from Bolton or any other witnesses. But after the trial starts, they could still decide to hear from witnesses. On Wednesday night, Parnas made a good case that he should get an invitation.