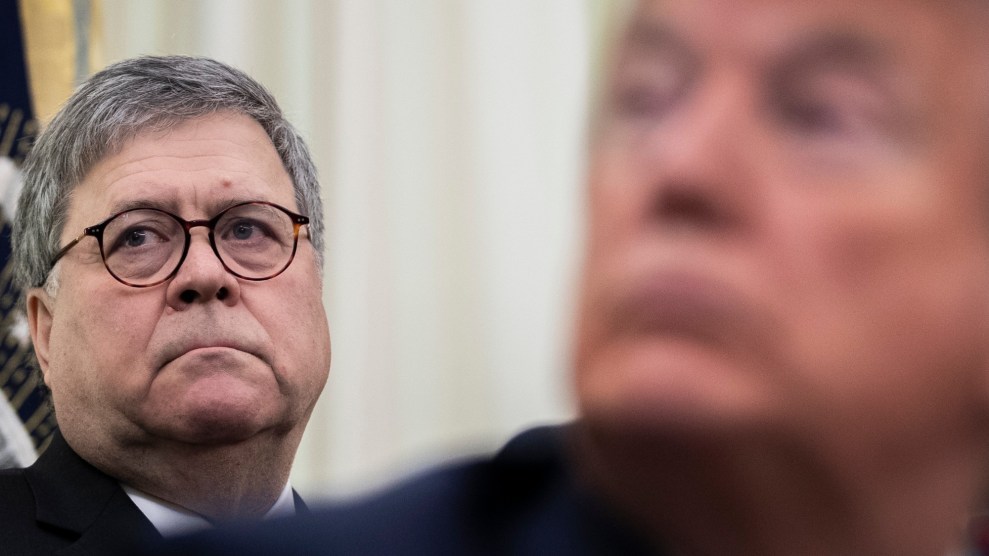 President Donald Trump took to Twitter on Friday to claim he has a “legal right” to interfere in Justice Department cases, but insisted that he has “so far chosen not to.” Anyone following Trump’s social media presence knows that not to be the case. He regularly tweets about business before the Justice Department and only last week praised Attorney General William Barr for softening the department’s sentencing guidance for Roger Stone, a Trump ally who was convicted of lying to Congress and obstruction of justice last year.

On Saturday, CNN turned up an egregious example of Barr running interference for Trump at DOJ, reporting that he “personally spearheaded” an effort last year to save Halkbank, a state-owned Turkish bank, from being indicted after President Recep Tayyip Erdogan “pressed Trump in a bid to avoid charges.” Erdogan’s personal involvement complemented a months-long lobbying campaign by Turkey to avoid prosecution. As my colleague Dan Friedman has reported, Turkey spent millions of dollars “pressing the White House, the State Department, and Congress to ask the Justice Department not to prosecute the Turkish bank. The top lobbyist working on that case, Brian Ballard, extensively contacted Trump’s lawyer Jay Sekulow during that time.

Despite the immense lobbying effort, CNN reported that Geoffrey Berman, US Attorney for the Southern District of New York, wanted a criminal prosecution anyway and Halkbank was eventually indicted on October 15 as part of a scheme to evade US sanctions on Iran.

Earlier that month, Trump’s friendly relationship with Erdogan briefly eroded after the White House issued a statement giving Turkey a green light to invade northeastern Syria, all but ensuring the destruction of Kurdish fighters there who had been allies with US troops against the Islamic State. Trump’s decision was widely criticized by Democrats and Republicans alike, forcing him to adopt a much harsher position toward Turkey. A day later, he threatened to “totally destroy and obliterate” Turkey’s economy if it does anything “off limits” in Syria.

As I have stated strongly before, and just to reiterate, if Turkey does anything that I, in my great and unmatched wisdom, consider to be off limits, I will totally destroy and obliterate the Economy of Turkey (I’ve done before!). They must, with Europe and others, watch over…

The indictment against Halkbank came soon after. Sen. Ron Wyden (D-Ore.), who had been investigating Trump’s role in the Halkbank investigation, tweeted that CNN’s story “confirmed” his suspicions about Barr “was trying to orchestrate a sweetheart deal to please President Erdogan.”

If true, why would they not be impeachable? https://t.co/ZtR9mASiT0

News of Barr intervening on Trump’s behalf yet again is notable because, only yesterday, Barr told ABC News that Trump’s tweets about DOJ “make it impossible for me to do my job.” It was possibly the sharpest reprisal Barr has had for his boss since joining the Cabinet last year, but given how Barr has interceded on Trump’s behalf before, it’s not clear what this means for their relationship. On Saturday morning, Trump defied Barr’s request and tweeted more harsh words for the Justice Department, this time for dropping the case against former FBI deputy director Andrew McCabe.