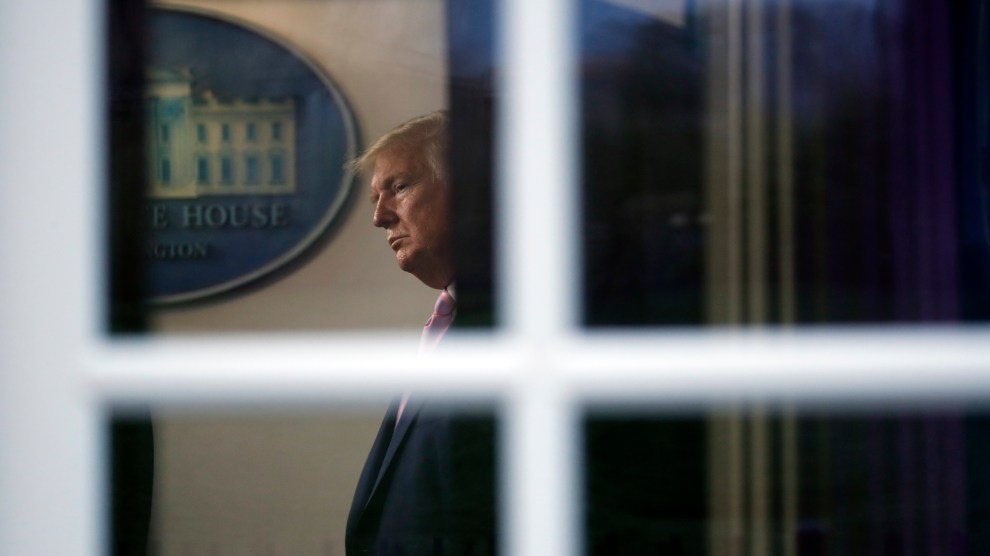 When President Trump floated the idea of reopening commerce to stimulate the economy, even at the cost of human lives lost to the coronavirus, he started repeating the phrase that “the cure can’t be worse than the problem itself.” After he used the words in a tweet on Sunday, March 22, some of his biggest backers went on cable news and wrote tweets over the next 48 hours about how they too were ready to die for the Dow, or at the very least sacrifice other people’s lives for it.

“If given the choice between dying and plunging the country I love into a Great Depression, I’d happily die.”

The remarks, from a broad range of commentators, illustrate the lengths that Trump supporters are willing to go to back the president, and have led some experts on deadly cults and so called “new religious” movements to note parallels between such organizations and rhetoric voiced by the president and his supporters.

That Monday night, Texas Lieutenant Governor Dan Patrick seemed to go full Midsommar—a horror movie about a fictional Swedish death cult that sacrifices their elders—by saying that ”as a senior citizen” he was “all in” on “willing to take a chance on [my] survival in exchange for keeping the America that all America loves.”

The next night Fox News’ Tucker Carlson discussed Patrick’s comments with analyst Brit Hume, who called Patrick’s comments “an entirely reasonable viewpoint.” Hume continued: “We don’t shut down the economy to save every single life that’s threatened by a widespread disease. We just don’t.”

Another Fox News personality, Steve Hilton, said that social distancing and stay at home orders indeed meant that “the cure is worse than the disease,” adding, “you think it is just the coronavirus that kills people? This total economic shutdown will kill people.”

Right-wing internet commentator Jesse Kelly tweeted on Tuesday morning that, “If given the choice between dying and plunging the country I love into a Great Depression, I’d happily die.”

Glenn Beck on Wednesday said that he too was ready to risk his life for the stock market, in a stream following a town hall in which Trump floated a return to reopening businesses and public gatherings by April 12, an ambition that Beck conceded could be a death sentence for thousands of Americans—himself included.

“I’m in the danger zone. I’m right at the edge, I’m 56,” he said while broadcasting from his home studio. “I would rather have my children stay home and all of us who are over 50 go in and keep this economy going and working, even if we all get sick, I’d rather die than kill the country. ‘Cause it’s not the economy that’s dying, it’s the country.”

“I never encountered anyone who is willing to die for someone else’s 401k.”

If all that sounds to you like the dangerous, macabre ramblings of a movement willing to sacrifice human life for illusory gains, you’re not alone. “I dealt with suicidal cults before. I encountered people who are willing to die for their faith, ideology, race, etc. But, I never encountered anyone who is willing to die for someone else’s 401k,” tweeted Ali Soufan, a former FBI agent who now runs an intelligence and security consultancy. “This is a whole new level of craziness.”

Formal experts on destructive cults agreed with Soufan’s diagnosis of Trump and his base’s support for letting some die. When I reached him via a Zoom video call, Steve Hassan, a mental health professional and cult expert, started nodding immediately when I asked if he saw parallels between, say, the Jonestown Massacre and Trump’s willingness to put the elderly on a near literal chopping block. Ben Zeller, a professor at Lake Forest University who focuses on new religions and Daniel Shaw, a New York-based psychoanalyst who has helped counsel people who have left cult religions, agreed with almost no hesitation.

The mass suicides at Jonestown weren’t a necessary part of any prophecy or pre-existing belief system that their leader, Jim Jones, had laid down. Instead, it was a reaction to his power over the cult being threatened. U.S. Courts had ruled that he return the son of two former members; if he ended up surrendering the child, Jones would be compromising the appearance of his total power. The move could have galvanized others to try to get their loved ones out of his compound in Guyana.

“A narcissist was forced to take down hundreds of people because that community was less important to him than the truth that he personally represented,” Zeller said on the phone, describing both Jones’ decision to poison his followers, and Trump’s musings about scrapping social distancing precautions. “Those were murders as well as suicides,” Zeller explained of Jonestown. “Ultimately it was more important for Jones and some of the people at the top of the movement that they all go out rather than be taken down by outsiders.”

Zeller, Hassan, and Shaw noted that the coronavirus’s threat to Trump’s power and presidency and his willingness to sacrifice the lives of his followers is not dissimilar. But while over 900 people died at Jonestown after drinking fruit-flavored punch spiked with poison, Trump’s plan would likely result in tens of thousands or hundreds of thousands of deaths, many of which would come from one of the president’s core bloc of followers, the elderly.

“How does that not evoke memories of people lining up to drink cyanide-laced Kool-Aid?”

“Saying that older people should be ready to die for the sake of the economy… Kill grandpa for the Dow,” Shaw said. “The fact that this is getting amplified. How does that not evoke memories of people lining up to drink cyanide-laced Kool-Aid at Jim Jones’ compound?”

Zeller also compared Trump’s bind and willingness to risk his followers’ lives to actions of David Koresh, who led the Branch Davidians through their siege in Waco, Texas that resulted in dozens of his group members’ deaths.

“David Koresh wasn’t able to connect his own narrative to the way outsiders saw it. All he wanted to do was preach. From the FBI’s perspective, he was engaged in criminal activity. These two visions couldn’t square. He couldn’t wrap his head around it. It didn’t occur to him that his analysis wasn’t the correct one,” Zeller says. This tension, Zeller explained, created an impasse where Koresh had no intention of ceding, making Waco’s fatal standoff inevitable.

Zeller, Shaw, and Hassan all, with some differences, define a destructive cult or new religion as an organization led by a charismatic, usually narcissistic, leader who limits where followers get their information and operates with a sadistic level of disregard for others’ wellbeing. With that definition in mind, they think that the parallels between such groups and Trump’s relationship with his base don’t stop at a willingness to sacrifice lives. Prior to the coronavirus, they had noted similarities in the President’s cult of personality, his seeming narcissism and self-centeredness, and how he brings in supporters and then spins a myth that he alone can bring solutions.

“To them, it’s ‘We have a higher truth. We’re in the last days, so it doesn’t matter what will happen to the economy because we’re in the lord’s hands. But they’re actually in human beings’ hands,” Hassan says.

Trump paints other politicians and media outlets, unless they bend the knee to him, as worthless, Hassan pointed out. Hassan noted that this is similar to how information structures work within destructive new religions. Charismatic and dominating leaders attempt to control the flow of information to their followers by pushing the line that only they have access to the truth and that it can’t be found anywhere else. While other politicians and presidents have bashed the press, none have gone so far to say the media is fundamentally illegitimate and that the White House was the only source of correct information.

Of course, there are important differences between Trump, his base, and the worlds’ well-known destructive cults. While there is a lot of solidarity in the MAGA community, the group is far less tight-knit and socially reliant than true cults, with much lower barriers to leaving.

“We’re in the last days, so it doesn’t matter what will happen to the economy.”

And Trump—unlike Jones, Koresh, and Heaven’s Gate mass suicide leader Marshall Applewhite—seemingly has no interest in harming himself or anyone close to him. “The sacrifices are to be made by other people,” Zeller pointed out.

One wonders how much Jesse Kelly, Lt. Gov. Dan Patrick, and Glenn Beck, who have access to top medical care, and in Kelly’s and Beck’s case, the privilege to work from home indefinitely, would truly have to sacrifice if social distancing were to be widely suspended. As Catherine Wessinger, a professor of religious history who specializes in new religions, pointed out, such comments made by such Trump backers were the kind that are  “easy to say if you’re a white man.”

But more broadly, Wessinger said that more than anything resembling a niche religion, Trump’s behavior was indicative of a common patriarchal and privileged disregard for the lives of others. “The problem with the way the word cult gets used is that it can be anything,” Wessinger warns. “If you ask people what they mean by it, they define it any way they want.”

Megan Goodwin, a lecturer on new religions at Northeastern University, has a succinct diagnosis behind Trump’s musings of sacrificing human lives, not for religious ends, but for the stock market: “The problem is capitalism,” she said. “It assumes infinite profit is possible. The goal to make as much money as possible is ultimately a genocidal system. It’s not unrelated to how we run the government. We elected someone who doesn’t make our lives better. We elected someone who wants profit above all else.”

In some way, the exact cause and costs of Trump’s rhetoric doesn’t matter if people are willing to follow it to their own deaths, or push his ideas encouraging the deaths of others.

“The designation of Trumpers being cultish is insignificant,” Shaw said. “If we accurately describe their behaviors, the evidence is overwhelming that there is a delusional leader who believes themself to be omnipotent with followers who are delusional and believe he’s omnipotent. And that’s a problem.”