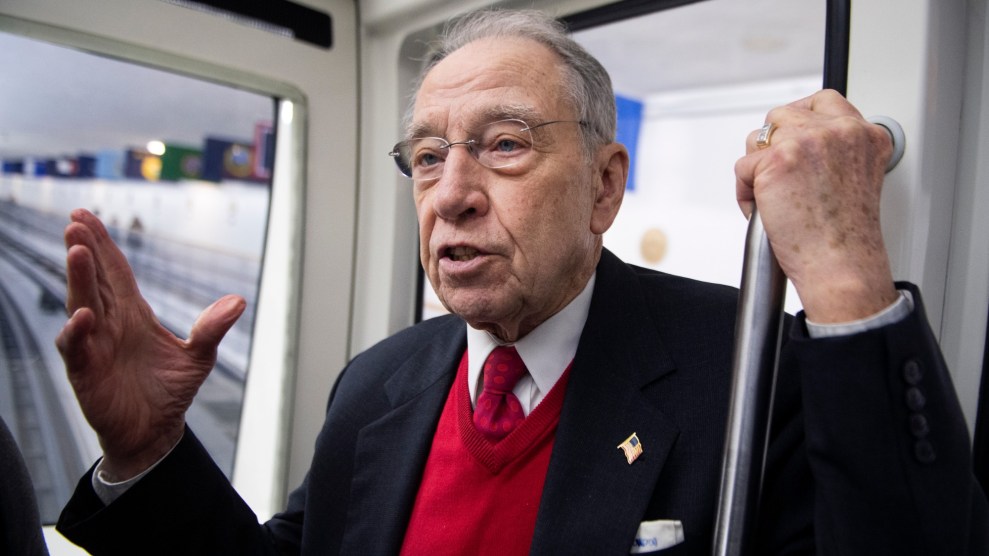 In June 2009, Sen. Chuck Grassley (R-Iowa), lit into President Barack Obama for firing Gerald Walpin as inspector general at the Corporation for National and Community Service. Grassley—joined by then-Sen. Claire McCaskill, a Missouri Democrat—faulted Obama for failing to give Congress the 30 days notice required by law or, initially, any explanation for the move, beyond saying he no longer had “the fullest confidence” in the IG. This bipartisan pressure caused the White House to elaborate on the reasons for Walpin’s removal. The administration said Walpin had appeared “disoriented” at a meeting, “exhibited a lack of candor,” and “engaged in other troubling and inappropriate conduct.”

Still, two and a half years later, Grassley remained so exercised by the affair that he opposed confirmation of Norm Eisen—who, as a White House lawyer, had handled Walpin’s removal—to be ambassador to the Czech Republic, even after Eisen personally apologized to Grassley.

“The Congress must not sit idly by when an inspector general is removed improperly,” Grassley said in a December 2011 statement on that vote. This persistence was consistent with Grassley’s reputation for defending the independence of government watchdogs like Walpin against any whiff of political pressure. But that was then.

Late Friday night, President Donald Trump informed Congress that he was firing Michael Atkinson, the inspector general for the intelligence community. By the time the White House notified lawmakers, Atkinson has already been placed on administrative leave, meaning he was effectively ousted without notice to Congress. Trump said in letters to the House and Senate intelligence committees only that he had lost confidence in Atkinson.

But on Saturday, during a news briefing about the coronavirus pandemic his administration has struggled to contain, Trump made his motive clear. “He took a fake report and he brought it to Congress with an emergency, okay,” Trump said, referring to the whistleblower report last year that first revealed Trump’s effort to coerce Ukraine into producing dirt on his political opponents. This was an admission that Atkinson was fired because by doing his job, for following the law by not burying a report that led to Trump’s impeachment. The Intelligence IG is legally required to share valid whistleblower complaints with Congress. The Ukraine whistleblower’s detailed complaint was validated by a series of witnesses who testified publicly in the House of Representatives.

“It is hard not to think that the President’s loss of confidence in me derives from my having faithfully discharged my legal obligations as an independent and impartial Inspector General, and from my commitment to continue to do so,” Atkinson wrote in a resignation letter Sunday.

But Grassley and other Republicans have so far offered only muted criticism of the move. On Saturday, Grassley called for a fuller explanation of the reasons for the firing. “Congress has been crystal clear that written reasons must be given when IGs are removed for a lack of confidence,” he said. “More details are needed from the administration.” Grassley has said nothing more since Trump spoke about the firing. A spokesman declined to say if the senator plans further action.

I encourage Pres Trump 2view IGs as helpers 2hold bureaucracy accountable+draining swamp. We all work to solve problems Esp in unprecedented pandemic, IG reports shld be viewed as a TO DO list & not criticism. Admin is quickly fixing problems that existed going back to Obama/Bush

Other Republicans have been even more circumspect. Senate Majority Leader Mitch McConnell (R-Ky.) has remained silent. His office did not respond to questions. Sen. Susan Collins (R-Maine) who famously explained her vote against removing Trump from office by saying he had learned “a pretty big lesson,” said Friday night that Atkinson’s removal “was not warranted.” But her office did not respond when asked if she plans any follow up.

Senate Intelligence Committee Chair Richard Burr (R-NC), who has jurisdiction over the intelligence IG, said in a statement Saturday that the “Inspector General serves at the behest of the Executive. However, in order to be effective, the IG must be allowed to conduct his or her work independent of internal or external pressure. It is my hope the next nominee for the role of ICIG will uphold the same important standards laid out by Congress when we created this role.” A spokesperson for Burr said Monday that he had no further comment. Senate Intelligence Committee members are discussing how to respond to the firing, an aide said Monday.

Senate Democrats have more forcefully denounced the firing, but so far they have not detailed plans to use legislative tools—such as holding up funding or nominations to press Trump to rescind his action—as whistleblower advocates have urged.

Danielle Brian, executive director of the nonprofit Project on Government Oversight, told Mother Jones that the group is in touch with “a number of Republicans who were alarmed by the firing, but the question remains what they will do publicly.” Brian’s group is urging lawmakers to respond by altering a law governing inspectors general to add language that that they may only be fired for cause.

But such action will not stop Trump from getting away with firing Atkinson for doing his job—an act of overt political retribution—or curb Trump’s broader effort to stuff key oversight and intelligence jobs traditionally reserved for nonpolitical appointees with partisan loyalists. “This is as a big a crisis for the future of oversight and accountability as I can remember,” Brian said.

On Tuesday, Trump appeared to double down on his interference with inspectors general by maneuvering to undermine a panel of federal watchdogs overseeing $2 trillion in coronavirus relief spending recently approved by Congress. Trump tapped the EPA’s inspector general to replace Glenn Fine—a respected official who had previously served as Justice Department inspector general—as acting Pentagon inspector general, Politico reported. A panel of inspectors general had picked Fine to head to the oversight panel tracking pandemic relief spending. But Trump’s move blocks that choice, because the law mandates that only a current IG can fill the new job position.

Even while dispersed due to coronavirus, members of Congress have the power to combat Trump’s efforts. There is no sign so far that they will.