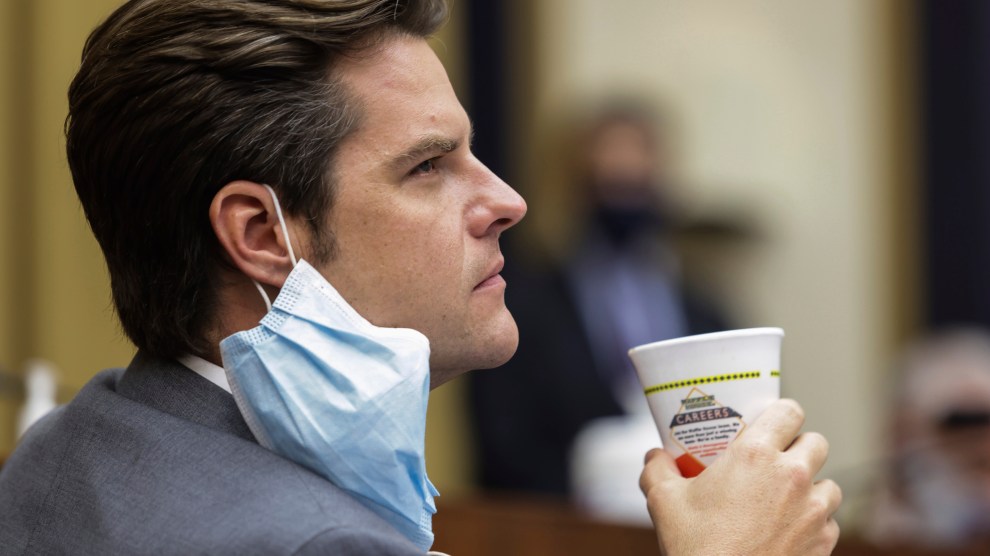 While Gaetz seemed to highlight groups with innocuous names, the organizations he listed are considered fringe outfits.

Gaetz remarks came in the course of attacking the Southern Poverty Law Center, a nonprofit organization that maintains a list of hate groups that Amazon has chosen to ban from using its fundraising service. “The Southern Poverty Law Center, which you allow to dictate who can receive donations on your AmazonSmile platform, have said the Catholic Family News, Catholic Family Ministries, the Federation for American Immigration Reform, the American Family Association, the Family Research Council, the Jewish Defense League, and even Dr. Ben Carson are extremists,” Gaetz said to Amazon CEO Jeff Bezos. “I’m just wondering why you would place your confidence in a group that seems to be so out of step and seems to take mainstream Christian doctrine and label it as hate?”

While Gaetz seemed to highlight groups with innocuous-sounding names, the organizations he listed are considered fringe outfits by far larger groups involved in similar issues.

Catholic Family Ministries and its publication Catholic Family News are a part of the anti-Semitic brand of Radical Traditional Catholicism that rejects the Vatican’s liberalizing reforms in the 60s and has played home to excommunicated priests. On their website, they have a page for articles tagged with “The Jews” with posts rejecting the Roman church’s modern conciliatory overtures to the Jewish community. They explicitly reject the kind of “mainstream Christian doctrine” that Gaetz’s question claimed they represent.

The Federation for American Immigration Reform, according to the SPLC, has multiple ties to white nationalists and eugenicists. The organization has documented FAIR’s founder, John Tanton, as saying the US should remain majority white.

The Jewish Defense League is the most puzzling Gaetz endorsement. In 2001, the FBI designated the organization as a “right-wing terrorist group.” Federal officials found them responsible for 15 acts of terrorism between 1980 and 1985, and JDL members were suspected of being responsible for a 1972 New York bombing that left two dead.

Despite the groups’ history of hate, Bezos caved to Gaetz’s questioning. “Sir, I’m going to acknowledge this is an imperfect system,” Bezos responded. “And I would like suggestions on better or additional sources.”

Gaetz fired back with the suggestion that Amazon should “divorce from the SPLC,” something conservatives angered by the watchdog group’s designations have long advocated.