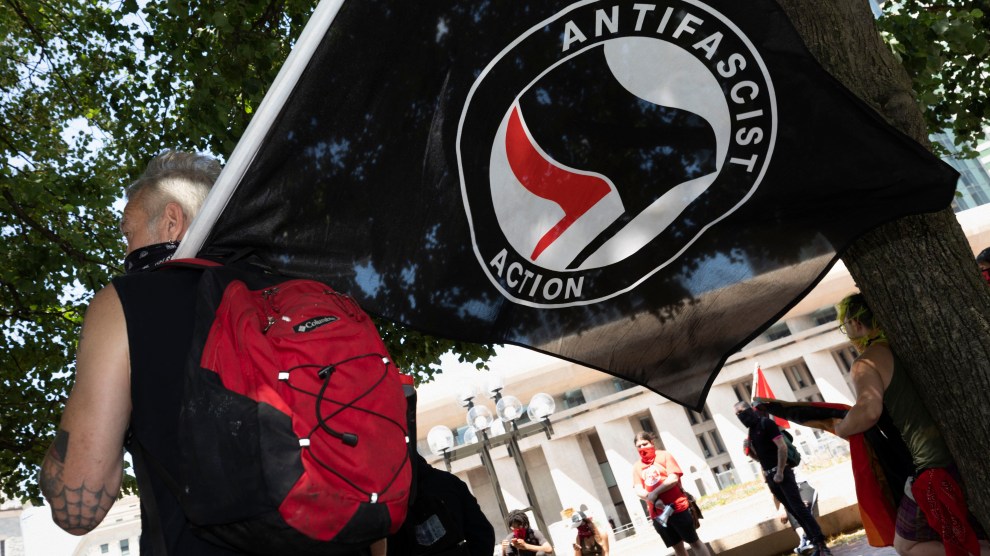 Last month, Facebook finally made an announcement that it had been teasing for weeks. The company said that it would begin taking more aggressive measures targeting QAnon and US-based militia, two groups that have increasingly posed domestic terror threats, including by banning some accounts and pages from its site. At the same time, the social media company announced it would target groups whose origins’ lie on the left by taking down anarchist or antifascist accounts that “support violent acts amidst protests.”

The plan’s optics offered a surface-level sort of fairness and evenhandedness, implying that groups espousing violence will be banned regardless of politics, no questions asked. But in practice, according to extremism experts and activists, Facebook’s enactment of this ban on antifascist accounts has been convoluted, unclear, and unjustified by the standards Facebook has laid out.

While the looming danger of Antifa to America is a well-worn conservative talking point, it doesn’t bear out.

About a week after the ban was announced, a friend called Kelly C. Wright to let her know that her account had disappeared. With the exception of the removal of a couple of comments she had left on news story posts, Wright says Facebook had never taken action on her account before or given her a warning about breaking their rules.

“I had read your story earlier in the day, so I whipped out my phone and saw that I had been logged off. And then I popped Facebook up onto my laptop to check, and my account had been banned,” she recalled over the phone, referencing a post I wrote detailing Facebook’s announcement of the ban.

After reaching out to some friends, Wright guessed that her account might have been banned because she serves as an administrator of the “Leftists for Self Defense and Firearm Freedom” Facebook page, a small page that had barely 1,800 likes. The other moderators of the group also appeared to have been banned, and the page had been suspended.

“We didn’t ever post anything that even supported revolutionary violence or anything like that,” says Jason Lee, another moderator. “The cover picture for the page was Black Panthers at the California statehouse. It wasn’t anything that advocated for violence.”

Other members of the page said that any support of violence found there would only have be voiced on the condition it was defensive, a posture that Facebook says would not violate its rules.

Facebook didn’t just ban Leftists for Self Defense and Firearm Freedom. When announcing the new policy, the company said it took down 980 groups and 520 pages related to militias and antifascists. While the company declined to break out this data, it did tell me that antifascists made up a comparatively small silver of the numbers. (Facebook also took action against 890 Facebook groups and pages it identified as being associated with QAnon.)

Among other pages taken down were two large news sources: It’s Going Down, an anarchist platform that helps track far-right extremism, and Crimethinc, “a decentralized anarchist collective” that has published antifascist articles. Neither appears to have a history of openly advocating for violence.

Facebook spokesperson Sally Aldous declined to comment on the ban’s targeting of Crimethinc, It’s Going Down, or Leftists for Self Defense and Firearm Freedom, or to provide more detailed reasoning for the removals, but she noted that Facebook looks at on and offline factors when making these decisions.

Facebook’s decision to take down the antifascist pages and groups is “extremely bizarre” according to Megan Squire, a computer science professor who researches online extremism at Elon University. “It’s not in line with the standards they wrote…This is a very dangerous path that they’re going down.”

To Squire, one of the most concerning aspects is Facebook’s seeming willingness to capitulate to the right’s desire for tit for tat moderation, regardless of circumstances. Squire and antifascist activists suspect that the bans are exactly what they look like: a “both-sides” attempt to placate conservatives who might get mad that only their side is getting moderated.

“The idea that they would feel a perverse need to both sides this is ridiculous,” she said on the phone, before recounting a conversation she had with a member of Facebook’s policy team who reached out to learn about her research. “The very first question that they asked me was, ‘Well, do you study both sides?’, which is a ridiculous question,” Squire recalled, explaining that there simply is not an equivalent to far-right extremism.

While a Facebook spokesperson denied that antifascists were included in August’s prominent moderation action in an attempt to appease the right, it is impossible to look at their inclusion in the same announcement as a QAnon and militia crackdown and not be suspicious.

“Leftwing violence has not been a major terrorism threat.”

While the looming danger of antifa to America is a well-worn conservative talking point, it doesn’t bear out under any scrutiny. While right-wing internet users have seized on reports that police are investigating a man who has voiced support for antifa in Saturday’s deadly shooting of a man in Portland, antifascists have practically no contemporary record of harming people in the United States. The Center for Strategic and International Studies, a centrist think tank, has cataloged domestic terror attacks since 1994 and found that in that time period, antifascists killed no one. In that same window, right-wing violence had claimed the lives of 329 people, including 117 victims over the past ten years.

“Leftwing violence has not been a major terrorism threat,” Seth Jones, a CSIS researcher who led the project, told The Guardian.

When pressed on its decision to include antifascists alongside far-right groups, a Facebook spokesperson did not have clear answers but stressed that the measures were aimed at addressing groups advocating violence through “veiled language” or promoting “hypothetical violence” that would be a threat to public safety. The company did not give a reason as to why anarchists were targeted before other violent groups that remain on the platform. While Facebook announced at the end of June that it would ban groups associated with the boogaloo movement, an armed right-wing sub-culture which says it is preparing for a civil war, many pages supporting the group remain.

Facebook’s own parameters for what constitutes anarchist and antifascist advocation of violence are extremely vague. In addition to “hypothetical violence,” the spokesperson explained that “aspirationally encouraging violence” against individuals or property could qualify. But the company has said not all types of property would be protected from threat, while declining to specify further. Depicting individuals holding weapons, especially in a “militant” way, could trigger action from Facebook. If all that sounds ambiguous, it’s because it is.

“I actually don’t have problems with starting to question and push back against any individual that supports violence in the U.S.,” says Jones. But even though some antifascists argue that violence is justified in certain instances, says Jones, it’s extremely rare that they ever proactively act on these ideas.

At least some of the antifascist groups Facebook targeted don’t appear to be committed to proactively carrying out violence. Wright and other moderators of Leftists for Self Defense and Firearm Freedom say they are not, leading them to guess that the group’s banner picture depicting armed Black Panthers somehow triggered their takedown.

Mike Andrews, a member of the It’s Going Down editorial collective, explains that violence isn’t a core part of his platform’s ideology. “We don’t want to kill people or hurt people. We’re for people bettering their own conditions. We want to excite people about coming together and doing things,” Andrews said. While he surmises the site’s ban could have been prompted by occasional positive coverage of armed groups to oppose neo-confederates.

Last spring Crimethinc published a piece titled “Against the Logic of the Guillotine,” which was critical of vengeful violence as a political tool. It has also posted other thoughtful meditations on how society conceptualizes when violence is and isn’t legitimate and how the state has a monopoly on it. Such thinking represents a stark contrast with QAnon’s fantasies about murdering supposed pedophiles or the gruesome fantasies envisioned by many armed militia members.

“Facebook is not being thoughtful or taking expertise on this issue,” Squire says. “They’re just figuring it out as they going along.”