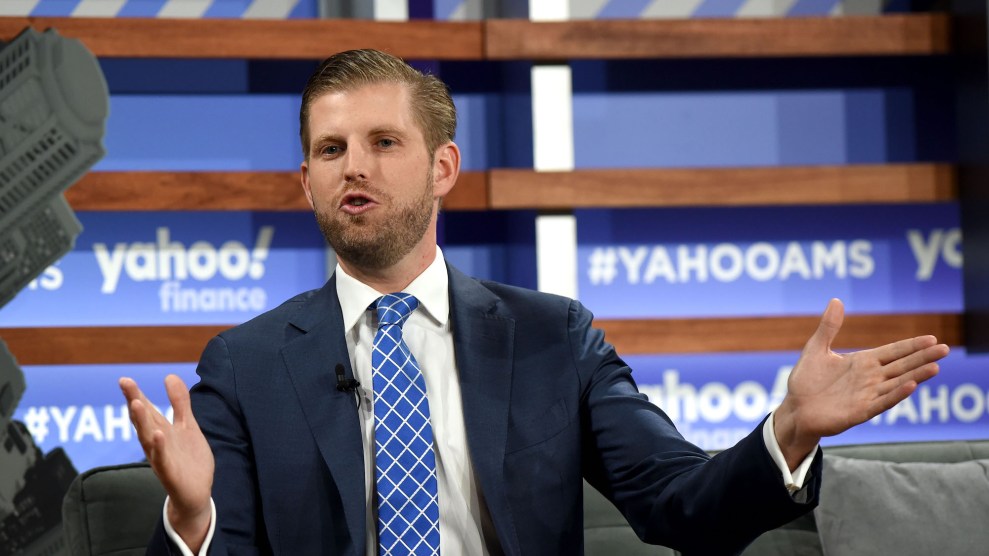 A New York state judge ordered Eric Trump to sit for a deposition with New York Attorney General Letitia James’ office by October 7 as part of her ongoing investigation into whether Donald Trump and the Trump Organization committed tax or bank fraud by misrepresenting company finances when applying for loans and filing taxes.

The investigation also focuses on whether Donald Trump paid taxes on more than $100 million in forgiven debt connected to the development of Trump’s Chicago hotel and tower. The scrutiny of this loan came after Mother Jones reported last year that a mysterious debt listed on Trump’s personal financial disclosure may be evidence of tax fraud. Worth $50 million or more (financial disclosures list assets and liabilities in ranges), this loan is held by a Trump-controlled entity called Chicago Unit Acquisition. In other words, Trump claims to owe this debt to himself. The Trump Organization has largely refused to discuss loan, but Donald Trump did once address the matter in an interview with the New York Times, saying it was a debt he had repurchased from a lender. Trump had two loans connected to the Chicago project: the first, through Deutsche Bank, was eventually refinanced through the German financial firm’s private banking division. The second loan, initially for $120 million, was issued by private equity firm Fortress. Mother Jones confirmed that Trump did not repurchase that loan—he paid the lender $48 million and the remainder of the debt was forgiven. Whether Trump bought the loan or settled it is an important distinction: When a loan is forgiven, the borrower owes a hefty tax bill, but if he or she buys it, the borrower can defer that tax liability at least temporarily. James’ office confirmed the loan was forgiven and subpoenaed the Trump Organization for records to prove that it had indeed properly reported the $100 million in forgiven debt as income—and paid the appropriate taxes.

After being subpoenaed in May, Eric Trump had agreed to be interviewed under oath by James’ office, but he abruptly backed out of the interview and had not agreed to a new date. Last month, James filed a request with Judge Arthur Engoron complaining that her office had sent a number of subpoenas to the Trump Organization which had stopped cooperating after initially complying.

Last week, Eric Trump’s attorneys submitted a court filing stating that Trump would be happy to testify—though he recently said otherwise in a FOX News radio interview—but not until after the election. Engoron rejected that argument on Wednesday, saying Trump’s attorneys had failed to offer any support for that argument and ordering the Trump Organization to comply with the New York AG’s requests.

“This court finds that application unpersuasive, Mr. Trump cites no authority in support of his request and in any event neither petitioner nor court is bound by timelines of the national election,” he said.