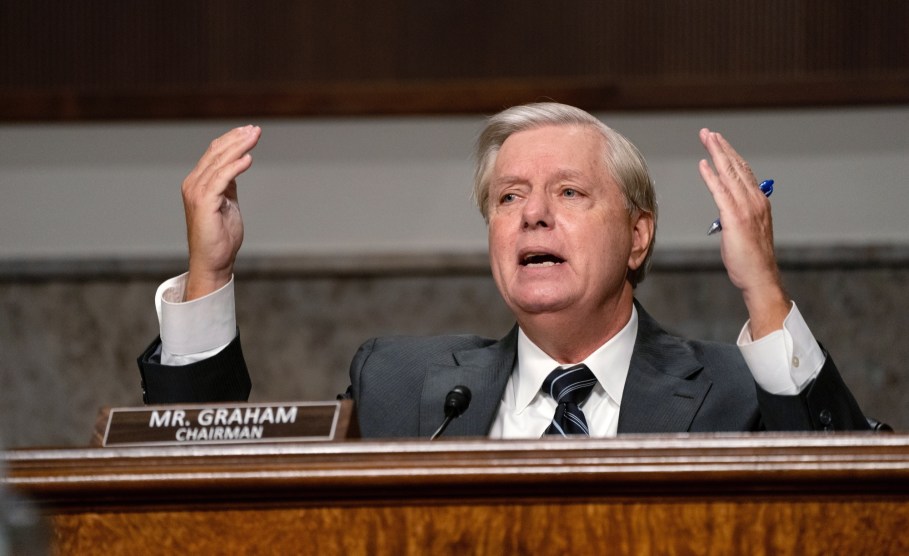 With barely a month to go before the 2020 presidential election, Republicans on the Senate Judiciary Committee spent Wednesday attacking Democrats’ 2016 nominee using alleged Russian disinformation. The GOP senators did so even as they blasted former FBI Director James Comey—who was testifying before the panel—for what they claimed was the bureau’s possible use of Russian disinformation.

In other words, Republicans spent a five-hour hearing Wednesday haranguing the FBI for advancing possible Russian disinformation, while busily doing the same thing themselves.

This might seem hypocritical, but it’s consistent with an overt bid by the committee’s chair, Sen. Lindsey Graham (R-S.C.), and other GOP senators to aid President Trump’s efforts to discredit the federal investigation into the Trump-Russia scandal.

Wednesday’s hearing was nominally part of a review of the launch of the FBI’s Trump-Russia investigation, the one that started before special counsel Robert Mueller’s May 2017 appointment. Republicans on the panel repeatedly asked Comey about the FBI’s reliance in 2016 on information compiled by former British intelligence agent Christopher Steele regarding contacts between Carter Page and Russian agents while Page was working as an adviser to Trump’s presidential campaign. (Steele gathered this information as a subcontractor for an opposition research firm Democrats hired to investigate Trump; he then turned findings over to the FBI.) Republicans focused on a September 24 letter in which Attorney General Bill Barr told Graham that a key sub-source for Steele “was the subject of an FBI counterintelligence investigation from 2009 to 2011 that assessed his/her documented contacts with suspected Russian intelligence officers.”

Never mind that Steele was hired to get information from people in contact with Russian intelligence. And Page, who was never charged with a crime, has admitted to secretly meeting with a Russian official during a July 2016 trip to Moscow that occurred while he was advising the Trump campaign. Still, Republicans at the hearing blasted Comey for the FBI’s inclusion of Steele’s findings in its successful applications for a secret Foreign Intelligence Surveillance Act (FISA) warrant to investigate Page.

But even as they complained that the FBI had put alleged Russian disinformation in a FISA application, Graham, Sen. Chuck Grassley (R-Iowa.), and Sen. Josh Hawley (R-Mo.) pressed Comey about “an investigative referral” that US intelligence agents apparently sent to Comey and other FBI officials in September 2016 regarding “allegations that the Clinton campaign was going to create a scandal about Trump and Russia.”

The senators based this on a letter Graham received on Tuesday—on the eve of a presidential debate—from Director of National Intelligence John Ratcliffe, a Trump loyalist and prominent critic of the Russia probe. Ratcliffe’s letter, which was sent at Graham’s request, states that “in late July 2016, U.S. intelligence agencies obtained insight into Russian intelligence analysis alleging that…Clinton had approved a campaign plan to stir up a scandal against…Trump by tying him to Putin and the Russians’ hacking of the Democratic National Committee.” This means that Russian spies apparently claimed, in a forum monitored by US spies, that Hillary Clinton’s presidential campaign was going to criticize Trump’s openness to Russian meddling in the US election, “as a means of distracting the public from her use of a private mail server.”

This is a weird claim to emphasize. It has never been a secret that the Clinton campaign hoped to highlight Trump’s embrace of Russian aid. Clinton attacked Trump publicly on that front. And she was right: Trump’s campaign “expected it would benefit electorally from information stolen and released through Russian efforts,” Mueller found.

In addition, the Ratcliffe letter and the GOP emphasis on it amounts to a far more public promotion of suspected Russian disinformation than the Page FISA application. Ratcliffe admits in his letter that US intelligence cannot vouch for the accuracy of the Russian analysis about Clinton, noting that it may “reflect exaggeration or fabrication.” This line seems to acknowledge that Russian intelligence agents may have deliberately tried to confuse Americans by planting the idea that their country’s well-documented interference in the 2016 election in support of Trump was actually a conspiracy theory concocted by his opponent.

Trump, for his part, was all too happy to boost this allegation during Tuesday night’s debate, albeit in a line largely overwhelmed by his other lies and boorish conduct. “You saw what happened today with Hillary Clinton,” he said. “It was a whole big con job.”

Having helped Trump level that charge, Graham said Wednesday that he did not “know how accurate the underlying information” Ratcliffe cited is. But Graham claimed his concern was that the allegations were ignored. “Apparently, nobody looked at this,” he said.

That too is false. The intelligence community and both Democrats and Republicans on the Senate Intelligence Committee have known of the information for years but discounted it as bogus, a Senate aide told Mother Jones Tuesday.

In a follow-up statement, Ratcliffe insisted that his letter was not based on Russian disinformation and vowed to share more information with Congress. A Graham spokesperson did not respond to an inquiry.

Comey said Wednesday he didn’t recall receiving a referral about the supposed intelligence in 2016 and expressed confusion about why Ratcliffe shared a finding he acknowledged could be bogus. “I don’t fully understand what he’s doing there,” Comey said.

Of all Comey’s many statements on Wednesday, that may be the hardest to believe. It is pretty clear what Ratcliffe, Graham, and Trump are up to.