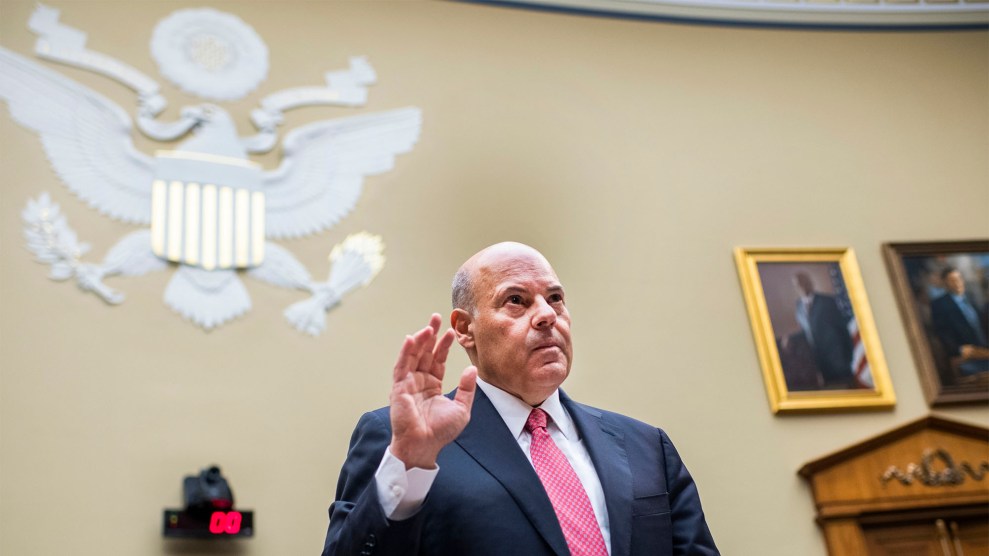 Postmaster General Louis DeJoy is sworn in before testifying during a House Oversight and Reform Committee hearing on the Postal Service in Washington on August 24, 2020. Tom Williams/Pool Photo via AP

A federal judge excoriated lawyers for the United States Postal Service on Wednesday for failing to comply with a court order on Election Day requiring postal inspectors to conduct sweeps of processing plans to make sure mail ballots were sent on time. “In no uncertain terms, I’m not pleased about this 11th-hour development last night,” Judge Emmet Sullivan told Justice Department lawyers representing USPS. “You can tell your clients that—and someone might have a price to pay.”

Sullivan said he wanted Postmaster General Louis DeJoy to sit for a deposition or appear before his courtroom under oath, saying that the failure to follow the court order starts “at the top of the food chain.” Samuel Spital of the NAACP Legal Defense Fund, which is challenging USPS policies that have lead to major mail delays, said he might seek a contempt-of-court order against DeJoy next week.

Last month, Sullivan ordered USPS to reverse policies implemented under DeJoy that led to major delays over the summer, such as prohibiting postal workers from making extra trips to deliver the mail. The Postal Service was slow to comply with the court order, and mail delays have gotten worse closer to the election, leading to fears that ballots will be rejected if they do not arrive on time. At least 30 states require mail ballots to be received by Election Day.

Yesterday, there were media reports that 300,000 ballots were not delivered on time, but that number is misleading because USPS is sending ballots without scanning them to expedite delivery, according to the agency. The Postal Service said it had no time to complete the sweep Sullivan ordered yesterday, but did its own investigation and found only 13 missing ballots, which were subsequently delivered on time.

Still, as of Election Day, there were nearly 27 million mail ballots that had been sent to voters but not mailed back. We don’t know if those voters dropped their ballots off, voted in person, or didn’t vote at all, but it’s still possible that thousands of votes could be rejected for arriving too late.