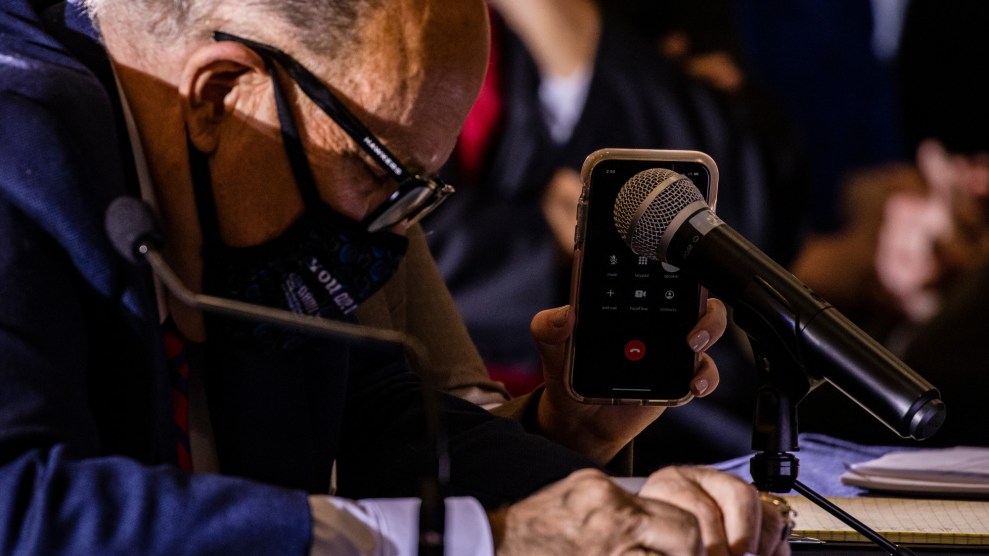 President Trump called into a bizarre meeting disguised as a hearing on unsubstantiated election fraud on Wednesday. The sham meeting designed to look like legislative session was in fact just a GOP hosted session at a hotel, organized by Pennsylvania state Republicans and the president’s personal lawyer Rudy Giuliani, who’s leading the campaign’s legal effort to challenge the result of the election.

Trump, who originally was rumored to appear in person, instead called into campaign lawyer Jenna Ellis’ cell phone midway through the proceedings and ranted about the “stolen election” as Ellis held the cell phone up to a microphone (interrupted occasionally by the sound of another incoming call to her phone). “This election has to be turned around because we won Pennsylvania by a lot and we won all of these swing states by a lot,” Trump said over the phone, despite the fact that the states of Pennsylvania and Michigan—another key swing state that the president lost— have already certified their votes, giving president-elect Joe Biden the Electoral College margin he needed to win the 2020 election. “We have to turn the election over because there’s no doubt we have all the evidence, we have all the affidavits, we just need some judge to listen to it properly,” Trump said, as a crowd of supporters cheered in agreement.

The meeting was just the latest, fleeting attempt for Trump and his campaign to try overturn the election results by spreading unsubstantiated claims of voter fraud that allege a vast international conspiracy to fix the 2020 election. Leading the effort is Giuliani, who for hours on Wednesday presented a host of witnesses to a panel of Republican state senators that told stories of voting irregularities they witnessed on Election Day. But at no point did Giuliani nor any witnesses present any evidence of election fraud. Instead, Giuliani marveled incredulously that there were more absentee ballots than were mailed out. (That’s because people could go in person to an election board office to request a mail-in ballot). He suggested that thousands of dead people voted. (They didn’t). And at one point Giuliani suggested, with no evidence, that a single person may have cast nearly 700,000 ballots.

The witnesses that the president’s lawyer rolled out to show evidence of election fraud included a first-time poll worker who apparently did not understand that it is proper election procedure to separate envelopes from ballots to ensure voter secrecy, as well as an elderly voter who did not understand how an electronic voting machine worked and thought it was “odd.” There was also an attorney claiming to be an expert in Pennsylvania election law, though is only licensed to practice law in Florida and Illinois.

The president, who said over the phone he had been watching the meeting on OANN, soaked it all up. “This election was lost by the Democrats, they cheated, it was a fraudulent election, they flooded the market, they flooded everybody with ballots and I just want to thank everybody for being there,” Trump said.

It’s easy dismiss this latest stunt in the Trump campaign’s trifling effort to change the results of the election as another sad sideshow of American democracy, the final pitiful whimpering of the clown show coup, but there’s something sinister at play. As my colleague Ari Berman wrote, Trump and his enabler’s vast effort to undermine the legitimacy of the election could set the stage for GOP state lawmakers to pass new voter suppression measures:

It’s very easy to imagine state-level Republicans introducing legislation in early 2021 to cut back on mail voting or early voting, which helped lead to record turnout in 2020. Republican attorneys general have intervened in litigation to back the Trump campaign’s efforts to block mail ballots that legally arrived after Election Day from being counted in Pennsylvania, claiming that the authority of the state legislature, which refused to give voters more time to send their ballots back, should supersede the judgements of state courts that did allot this extra time—an argument that could give GOP-controlled state legislatures even more sway over voting laws in 2021.

Though Wednesday’s meeting doesn’t have any real consequence for the Pennsylvania state Senate—it was merely a caucus meeting for the state’s Senate majority policy committee—the lawmakers who led it vowed to investigate the election measures that allowed a record number of people to vote in Pennsylvania. While Giuliani and Ellis kept repeating that the state legislators should overturn the will of their state’s voters, the lawmakers’ questions were often more pointed toward looking at how they could use these erroneous claims of fraud as reason to push future voter restrictions.

Still, while the lawmakers seemed unlikely to intercede to subvert the 2020 election results, that didn’t stop them from kowtowing to the president’s ego, offering up histrionics to appease the president bunkered at the White House. “In a hundred years this will be the most important hearing this state senate committee has ever held,” Republican state Sen. Doug Mastriano said.