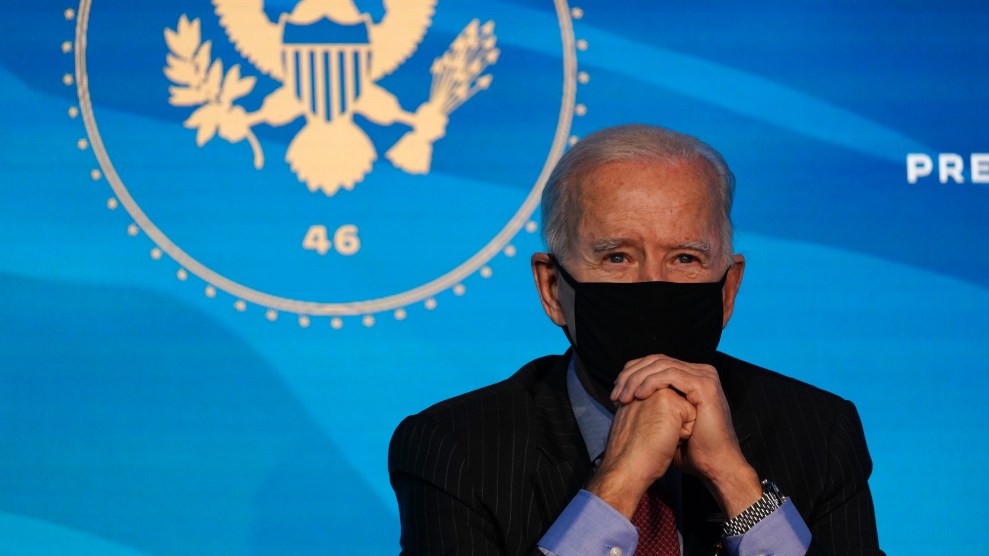 One of the lessons learned from President Barack Obama’s response to the Great Recession is that the stimulus the White House requested was too small to address the gaping hole left in the US economy by the mortgage collapse. Now, more than a decade later, the incoming Biden administration is grappling with how big its own first economic stimulus request should be. And that figure, which is expected to be announced later this week, has been a moving target.

In a meeting with incoming Senate Majority Leader Chuck Schumer (D-N.Y.) late last week, transition team officials floated $1.3 trillion as a possible target for Biden’s first COVID relief bill, according to sources familiar with the conversation. That’s half of the $3.4 trillion Democrats proposed in the HEROES Act, the doomed relief bill the House passed last summer. (Some elements of that proposal passed in the $900 billion stimulus package Donald Trump signed into law last month.) During the meeting, sources say, Schumer noted that he believed $1.3 trillion was not enough to address the current state of the tattered economy, which shed 140,000 jobs in December. Whether or not in response to Schumer, Biden officials are now leaning toward raising their ask, according to a source familiar with the transition team’s work. No sources shared the line items that contributed to the $1.3 trillion.

The potential change in Biden’s top-line request, the source says, stems from the fact that the incoming administration has only recently determined the full costs to the economy of Trump’s bungled response to the virus and his administration’s disappointing vaccine rollout. Trump officials initially blocked the Biden team’s access to Tiberius, the database the government uses to monitor vaccine distribution, and the team has only just begun using it: “As we learn more and gain visibility, the calculus changes,” the transition source says. Politico reported on Monday that there are rising concerns Biden may not be able to meet his goal of 100 million Americans vaccinated within his first 100 days.

A spokesperson for transition declined to comment, pointing to the president-elect’s recent comments that the federal government “need[s] to provide more immediate relief for families and businesses now.”

Economists broadly blame the Great Recession’s sluggish recovery on insufficient federal spending. The Obama administration proposed an initial stimulus that was smaller than what its economists believed was needed but that would be acceptable to deficit hawks in both parties. The Obama White House figured it would get another crack at stimulus spending later, but it never did. The resulting slow job growth and Republican attacks on Obama’s spending cost Democrats the House of Representatives in 2010.

“To keep the economy from collapsing…we should be investing significant amounts of money right now.”

Republicans have vowed a return to balanced budgets under Biden. Progressives, meanwhile, have agitated over the prospect of austerity politics and have criticized the incoming administration over any personnel decisions that suggest such a direction. And although the president-elect has signaled a desire for bipartisan dealmaking, he’s called for deficit spending to help shock the economy out of its current recession. “The price tag will be high,” Biden said at a news conference last Friday. “The overwhelming consensus among leading economists left, right, and center, is that in order to keep the economy from collapsing this year—getting much, much worse—we should be investing significant amounts of money right now.”

Biden’s package would cost “trillions of dollars,” he noted, and it would include extended unemployment insurance, aid to cities and states, and the $2,000-per-person direct stimulus payments that Biden promised while stumping in Georgia for Sens.-elect Jon Ossoff and Raphael Warnock. His request would also include new funding for schools, rent forbearance, and money to speed up vaccine distribution.

Schumer outlined a matching set of priorities in a letter to his Senate Democratic colleagues on Tuesday afternoon, promising that his first order of business as majority leader will be to pass a COVID relief package. He wrote that he hoped the Senate’s relief agenda will be bipartisan, but if Republicans stand in opposition, “we will not let that stop progress.” The 50-50 Senate split leaves Democrats with a narrow majority, with Vice President-elect Kamala Harris as the tiebreaker. Barring changes to the filibuster, this balance will push much of Biden’s legislative agenda into the budget reconciliation process, which requires only a simple majority for passage, not the 60 votes needed to overcome a Republican filibuster.

Sen. Bernie Sanders (I-Vt.), who is expected to chair the Senate Budget Committee and, thus, oversee the reconciliation process, is also pressuring the Biden team to put forward a larger initial relief package. In addition to $2,000 payments—a proposal Sanders championed in the Senate—he is also seeking hefty federal investments in child care, health care, education, and the fight against climate change. “We have to act with a boldness that we have not seen in this country since FDR,” he told NBC News last week. “If we do not, I suspect that in two years we will not be in the majority.” Biden is likely to pursue a larger legislative effort later this year that would match his campaign promises to devote trillions in spending to infrastructure and clean energy jobs.

Because Congress did not pass a budget for fiscal year 2021, there is a chance for lawmakers to approve two budget bills this year—one covering the current fiscal year within the first 100 days and one for the next one. That would give the Biden administration and the Democrat-held Congress two opportunities to enact economic relief and reforms with a simple majority. This prospect eases the pressure on Biden to obtain all he wants with the initial stimulus package, but using reconciliation to bypass Republicans for the first round of stimulus could slow down the process, pushing any new funds until later in the spring. In preliminary conversations with lawmakers on Capitol Hill, Biden officials, according to the Washington Post, have signaled they are hoping to pass the first stimulus bill through regular procedures, which would require 60 votes and bipartisan support.