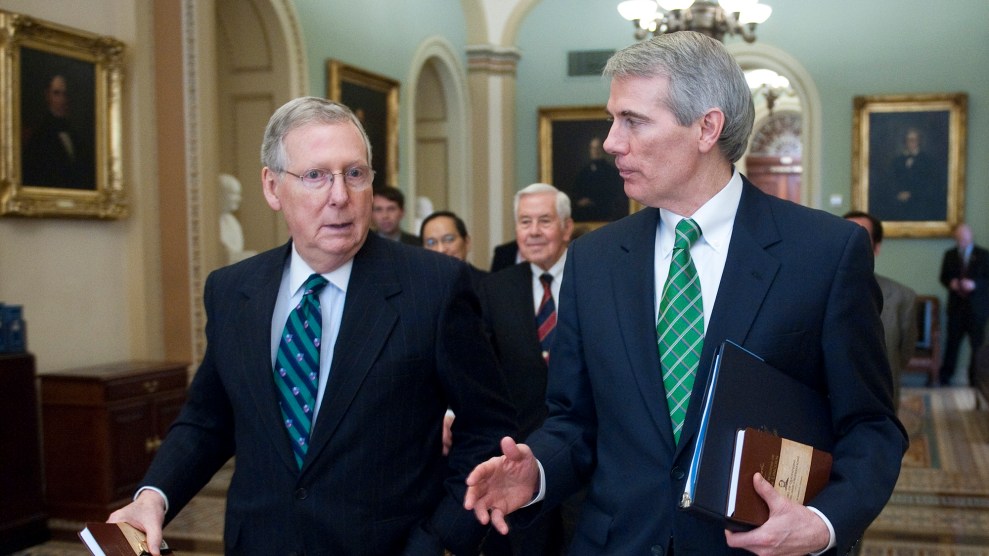 Sen. Rob Portman (R-OH) announced Monday that he won’t seek reelection in 2022. One reason he chose to retire, he said in announcing his decision, is because “it has gotten harder and harder to break through the partisan gridlock and make progress on substantive policy.”

But if Portman didn’t like partisan gridlock, he shouldn’t have spent years supporting it.

Portman decries partisan gridlock after voting to keep it in place.

A loyal Republican, Portman has been a reliable ally and backer of Mitch McConnell, his party’s leader in the Senate and a key architect of the Senate’s current dysfunction. When Barack Obama won the White House, McConnell attempted to make him a “one-term president” by rallying Republican Senators to block every one of his initiatives. Attempts by Democrats to work across the aisle failed; Obamacare limped across the finish line after the GOP refused to support it for a year. A graveyard of legislation passed by the House of Representatives piled up in the Senate, where McConnell reportedly didn’t mind his nickname of “grim reaper.” “Rarely has a political figure pinned his fortunes on accomplishing so little,” the Associated Press noted of McConnell in 2019.

Today, McConnell is preparing to run the same plays that he developed against Obama on President Joe Biden. As a first step, over the last week, he has held up the business of organizing the new Senate in an attempt to protect the filibuster. The modern filibuster, created in the early 20th century to defeat post-Reconstruction civil rights legislation, requires 60 of the 100 senators to greenlight legislation for passage. Under Mitch McConnell, it became a tool to defeat everything Democrats want—the key to his strategy of gridlock and obstruction.

The filibuster is a weapon of minority rule, and McConnell wants to keep it because it will give him the power to kill legislation even in a Senate he no longer controls. Portman, who is now throwing up his hands at the upper chamber’s hopeless gridlock, also supports maintaining the filibuster. The “Senate supermajority…forces us to work together,” Portman claimed in a tweet backing the filibuster on Sunday. “It provides stability.”

Portman’s argument that a supermajority requirement forces bipartisanship was around when the Constitution was written, and the founders found it unconvincing. They preferred simple majority rule, not supermajority rule. As Adam Jentleson, a onetime aide to former Democratic Senate Majority Leader Harry Reid and the author of Kill Switch, a new book on the Senate and the filibuster, wrote last week in the New York Times:

As Alexander Hamilton wrote in Federalist 22, the idea that a supermajority encouraged cooperation had proven deceptive: “What at first sight may seem a remedy, is, in reality, a poison.” Rather than encourage cooperation, he prophesied, the effect of requiring “more than a majority” would be “to embarrass the administration, to destroy the energy of the government, and to substitute the pleasure, caprice or artifices” of a minority to the “regular deliberations and decisions of a respectable majority.”

Portman is decrying partisan gridlock on the way out, after years of complicity in keeping it in place. After 10 years backing Mitch McConnell’s leadership in the Senate, Portman can surely see how the filibuster has stifled the chamber’s ability to legislate. But most of that obstruction has laid waste to Democratic priorities. Perhaps that’s why he hasn’t minded so much.