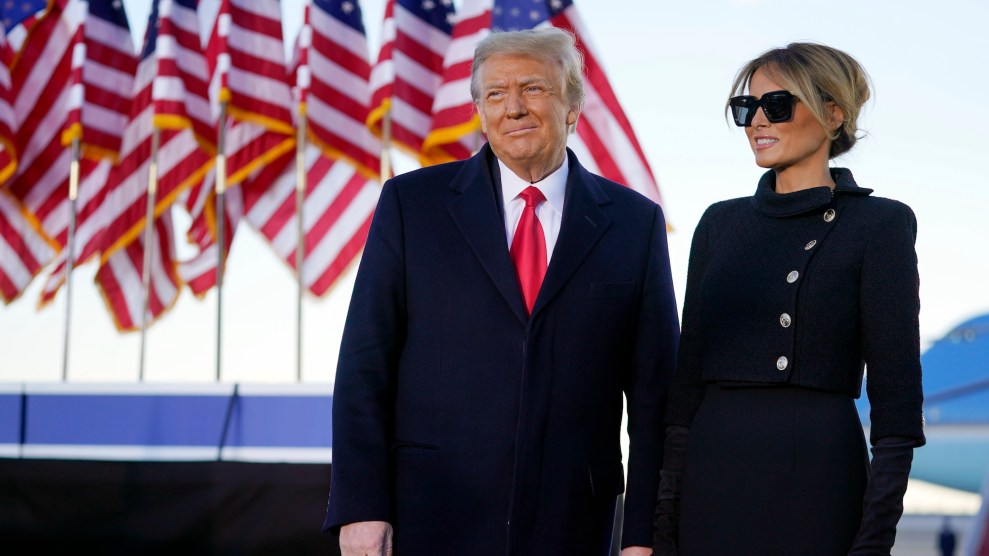 Donald Trump reportedly always felt boxed-in at the White House—escaping whenever he could to one of his golf resorts—but on his first day back as a private citizen, he may find himself feeling more claustrophobic than ever. Trump will return to a faltering business empire, its troubles magnified by the insurrection at the Capitol that he provoked. His bankers don’t want his business. Business partners are cutting ties. He’s facing looming deadlines to repay hundreds of millions in debt, with few good options for coming up with the cash or refinancing. Meanwhile, the threat of post-presidency legal problems, civil and criminal, has proliferated.

In short, the walls are closing in.

Despite Trump’s best efforts to cash in on the presidency, his company, the Trump Organization, has not fared well these past four years. His Scottish golf clubs, an increasingly important component of Trump’s portfolio into which he has poured $400 million since 2006, have been hemorrhaging cash. Revenues have been slipping at many of his US properties. And that was before the coronavirus pandemic wreaked havoc on the hospitality sector. “It’s going to be very, very tough to keep the boat afloat,” the manager of Trump’s Chicago hotel told investors in October.

Only a few Trump ventures, mainly flagship properties that Trump frequented, have seemed to prosper. Those properties—New Jersey’s Bedminster golf course, Florida’s Mar-a-Lago, and the Trump hotel in downtown DC—each saw a boost in business due partly to an influx of fans and favor seekers. But, as a twice-impeached ex-president who instigated a deadly riot during his final days in office, Trump is likely to find his draw dramatically diminished, especially at his DC hotel, which during his tenure served as an unofficial clubhouse for Republican powerbrokers and wannabes.

The most recent setbacks to Trump’s business have been entirely self-inflected, caused by the cascading fallout of the insurrection Trump incited though his two-month campaign of lies about the election results. In the wake of the riot, tenants at Trump’s 40 Wall Street property, including the Girl Scouts of America, announced they want out of their leases; the PGA pulled its 2022 tournament from Bedminster; New York City moved to terminate longstanding contracts with Trump to operate skating rinks and a carousel in Central Park and a Bronx golf course; Palm Beach County, which leases a golf course to Trump, said it was looking into how to sever the relationship.

The shocking violence at the Capitol also proved the breaking point for at least three banks that count Trump as a client. Signature Bank, where Trump maintained accounts valued at more than $5 million, issued a statement urging Trump to resign and announcing it would close his accounts. Professional Bank said last week it would “wind down” its relationship with Trump. The small south Florida bank is the only firm to lend to Trump during his presidency, giving him an $11.2 million loan in 2018 to purchase his sister’s mansion, adjacent to Mar-a-Lago. Trump also has a money market account with the bank worth more than $5 million.

Even more problematic, Trump’s largest creditor, Deutsche Bank, said it would no longer do business with him. The German financial giant was the last major commercial bank willing to lend to Trump, whose litigiousness and track record of corporate bankruptcies made him a pariah among other lenders. Deutsche’s break with Trump is a big deal, and it couldn’t come at a worse time.  Over the next four years, Trump owes nearly a half-billion dollars to two lenders. He owes much of that debt to Deutsche. Some of Trump’s pending loans are guaranteed by Trump himself, meaning a creditor could come after his personal—not corporate—­assets if he defaults.

Trump’s financial disclosures show that he has, at most, about $146 million in available cash. That means he will either need to start selling off assets to repay his loans or attempt to refinance them. As recently as a couple months ago, Deutsche had a strong incentive to roll Trump’s debts into a new loan, avoiding the messy process—and public relations debacle—of pursuing Trump’s collateral if he defaulted. Now, with Trump deeply unpopular and deprived of his Twitter megaphone, Deutsche has less reason to make a deal. By jettisoning Trump, Deutsche will force Trump to find a new lender. And if his options were limited before, they’re more so now.

Trump can—and may have to—turn to some of the more predatory corners of the lending market. There are always hedge funds and other financial firms willing to lend to even the most scandal-tarnished individuals under the right circumstances. But, in exchange for accepting the risk, such firms often charge high interest rates and impose ironclad clauses allowing them to seize valuable assets if there is any wobble in repayment.

The mounting financial pressures on Trump are matched only by the legal ones. The question of whether Joe Biden’s Justice Department should pursue charges against Trump for obstruction of justice and other potential crimes committed in office remains a subject of fierce debate. But in New York Trump already faces advanced investigations by the New York Attorney General and Manhattan District Attorney, which are scrutinizing possible financial misconduct by the Trump Organization. The Manhattan DA is building a criminal case. Trump also confronts defamation suits from multiple women who have accused him of sexual assault and an ongoing investigation by Washington DC’s attorney general into financial misdeeds by his inaugural committee. The attack on the Capitol, along with Trump’s litany of false statements targeting the voting machine company Dominion (which has filed a $1 billion suit against lawyer Sidney Powell), may place him in legal jeopardy. Additionally, Trump potentially faces legal scrutiny overseas. In Scotland, lawmakers are pushing to use an anti-money laundering tool against Trump. Known as an unexplained wealth order (UWO), it allows the government to pry into a politically prominent person’s finances.

On Wednesday, instead of returning to New York, Trump is jetting to Florida, where he plans to make his new home at his Mar-a-Lago, club. He’s unlikely to find much peace there. His neighbors are challenging his right to lay down roots on the property, citing an agreement he signed in 1993 saying he would not make Mar-a-Lago his residence.

“Have a nice life,” Trump declared as he departed the White House Wednesday morning. Given the financial and legal tumult he is heading into, it remains to be seen how nice life will be for the soon-to-be former president.