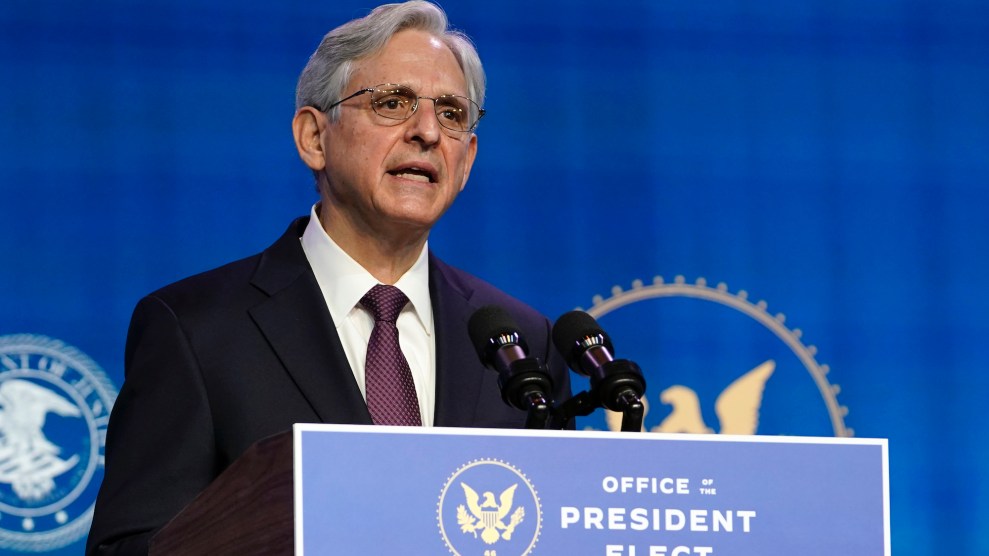 Merrick Garland will appear before the Senate Judiciary Committee on Monday for his confirmation hearing as President Joe Biden’s nominee for Attorney General. According to his prepared opening statement, released over the weekend by the Justice Department, Garland will signal that his departure from the federal bench to serve as the nation’s top law enforcement official will be in part to work on restoring a justice system left battered by the Trump administration.

“I have told you that I love being a judge,” the statement reads. “I have also told you that this is an important time for me to step forward because of my deep respect for the Department of Justice and its critical role in ensuring the Rule of Law.”

Following a wave of stories spotlighting Garland’s role at the Justice Department in prosecuting the perpetrators of the 1995 Oklahoma City bombing, his statement also makes clear that he will once again prioritize the threat of far-right domestic terrorism:

Celebrating DOJ’s 150th year reminds us of the origins of the Department, which was founded during Reconstruction, in the aftermath of the Civil War, to secure the civil rights promised by the 13th, 14th and 15th Amendments. The first Attorney General appointed by President Grant to head the new Department led it in a concerted battle to protect black voting rights from the violence of white supremacists, successfully prosecuting hundreds of cases against members of the Ku Klux Klan.

Almost a century later, the Civil Rights Act of 1957 created the Department’s Civil Rights Division, with the mission “to uphold the civil and constitutional rights of all Americans, particularly some of the most vulnerable members of our society.”

That mission remains urgent because we do not yet have equal justice. Communities of color and other minorities still face discrimination in housing, education, employment, and the criminal justice system; and bear the brunt of the harm caused by pandemic, pollution, and climate change.

150 years after the Department’s founding, battling extremist attacks on our democratic institutions also remains central to its mission.

If confirmed, Garland will also oversee potential police reforms that Americans demanded amid nationwide protests in the wake of George Floyd’s murder last summer. Garland’s appearance before the Senate Judiciary Committee comes five years after Senate Republicans led by Mitch McConnell notoriously blocked consideration of his nomination to the Supreme Court by President Barack Obama, following the death of Justice Antonin Scalia. Should Garland become attorney general with bipartisan support, as is widely expected, the seat he vacates on the DC Circuit Court of Appeals will await a nominee from Biden, who may also soon have a Supreme Court vacancy to fill.