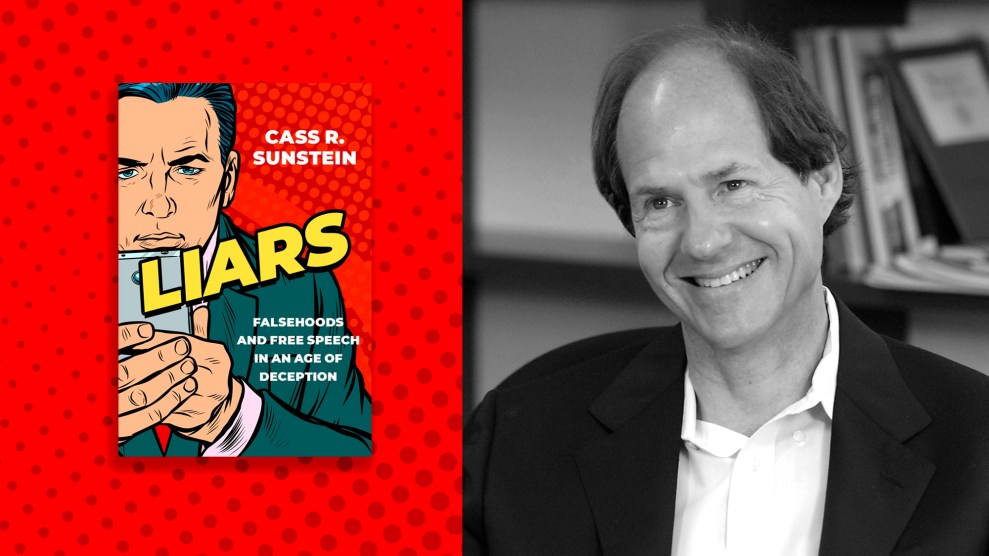 Cass Sunstein is a public intellectual and provocateur—and he has been pondering a timely issue: public lying.

A longtime Harvard law professor and an expert on behavioral economics, Sunstein has written a slew of books, including volumes on cost-benefit analysis, conspiracy theories, animal rights, authoritarianism in the United States, decision-making, and Star Wars. He is currently co-authoring a book with Nobel prize-winning psychologist and economist Daniel Kahneman on human judgement. He was recently named senior counselor at the Department of Homeland Security, where he will oversee the Biden administration’s rollback of Donald Trump’s policies. (Some progressives, who criticized Sunstein for strangling regulations when he was the regulation czar for President Barack Obama, worried about a return to government service for Sunstein, but his DHS appointment has not caused a fuss.) But right before he rejoined the federal government, he released his latest work: Liars: Falsehoods and Free Speech in an Age of Deception.

The book is certainly a product of the Trump era, a stretch in which the “former guy” made 30,583 false or misleading claims while serving as president, according to the Washington Post. All his lying kind of worked. Donald Trump was elected despite—or because—of his serial falsehood-flinging. He nearly won reelection after his tsunami of truth-trashing. And after the election, Trump promoted the Big Lie that victory had been stolen from him, and his crusade triggered an insurrectionist raid on the Capitol that threatened the certification of the electoral vote count. After all that—and after Trump’s misleading statements about the COVID-19 pandemic led to the preventable of deaths hundreds of thousands of Americans—Trump remains the leader of the Republican Party and a hero for tens of millions of Americans.

So what, if anything, can be done to thwart such lies? Especially in an age of expanding disinformation, wild-and-wooly social media, QAnon, deepfakes, and widespread acceptance of conspiracy theories?

In his book, Sunstein discusses why lying can succeed (“faleshoods are more likely to spread than the truth”) and how tough it is—especially given First Amendment freedoms—to counter them. He notes that certain forms of lying can be punished: perjury, defamation, and false advertising. And he argues for extending the category of lies that ought to be officially punished, noting, “Governments should have the power to regulate certain lies and falsehoods, at least if they can be shown to be genuinely harmful by any objective measure.” Though that is much harder done than said.

I spoke with Sunstein about all this for the Mother Jones Podcast. And we addressed the big topic: given that a debate over lying and what to do about it is, in a way, a debate over reality, how can we as a democratic society function, if we don’t agree on what is and isn’t true?