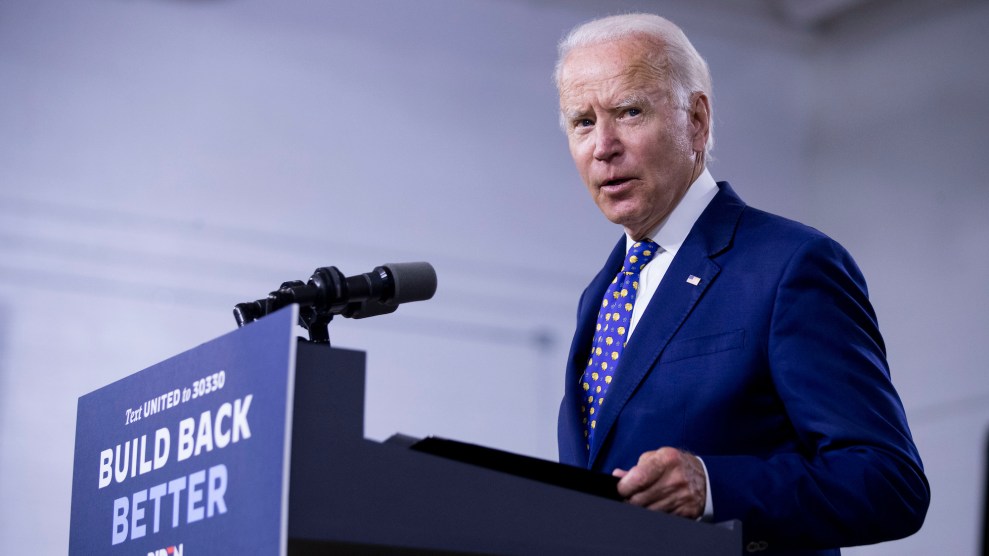 Yes, the $2 trillion proposal President Joe Biden is unveiling Wednesday would fix roads, transit stations, and bridges. But to simply call it an infrastructure plan understates its ambitions. It’s the closest we’ve come to a realization of the Green New Deal, an ambitious collection of progressive proposals to combat climate change, racial injustice, and gender inequality as much as one to upgrade asphalt.

The president’s plan doesn’t quite meet the challenge of addressing the climate crisis, but it would go a long way toward tackling some of the United States’ biggest and stubborn sources of pollution, by expanding clean energy for the electricity, building, and transportation sectors. To begin to understand the scope: At $1 trillion in total clean energy investment, the plan’s climate spending is more than Congress’ entire investment in the 2009 stimulus, the American Recovery and Reinvestment Act. Other proposals single out persistent racial inequities and propose funding to remedy them, including money to clean up the many kinds of pollution that plague communities of color across the country. It also seeks to advance gender equity, with a $400 billion investment in long-term care for the elderly and disabled that aims to pay the women who do that work fairly and alleviate the burdens of caregiving that often fall on women in families.

The plan is still in its broad strokes, and the final version could look quite different from Biden’s original vision in the narrowly Democratic-controlled Congress. Given those political realities, the White House’s ambition to “reimagine and rebuild a new American economy” is more of a down payment on the environmental, racial justice, and gender inequality challenges Biden promised to tackle on the campaign trail than it is a fulfillment of those pledges. But that down payment is, nonetheless, a significant one: Those political constraints also mean the infrastructure package might be the president’s only chance to make good on these key issues.

It’s the closest we’ve come to a realization of the Green New Deal, an ambitious collection of proposals to combat climate change, racial injustice, and gender inequality.

On climate, there’s plenty for environmentalists to get excited about, including, at long last, a serious proposal for plugging the hundreds of thousands of oil wells dotting the country that continue to leach pollution into drinking water and the atmosphere. The $16 billion allocation is the first significant federal attempt in recent memory to address the problem of these leaking oil and gas wells, which also are a source of methane, a potent greenhouse gas that’s warming the atmosphere.

Restoring and reclaiming abandoned coal, hardrock, and uranium mines while plugging old oil and gas wells will also create hundreds of thousands of union jobs, according to the White House summary of the president’s plan. And the White House brings back a favorite from pro-Green New Deal Democrats for a Civilian Climate Corps to “put a new, diverse generation of Americans to work conserving our public lands and waters.”

The plan proposes a cash infusion—at $100 billion—for the electricity grid to better handle extreme weather events while transitioning to cleaner fuels. There’s a lot packed into this part: using the federal government’s purchasing power to drive clean energy deployment, extending tax credits for clean energy generation and storage, and creating block grants to support programs with a clean energy agenda, among other proposals, all with an eye toward the president’s goal of a 100 percent carbon-pollution-free power sector by 2035. The devil will be in the details for all this, especially for ideas like a national clean electricity and energy efficiency standard.

For transportation, the country’s biggest source of greenhouse gas emissions, Biden’s main proposal is a $174 billion investment in the electric vehicle market. These include ideas for installing 500,000 EV chargers by 2030, rebates and tax incentives to buy American-made EVs, replacing 50,000 diesel transit vehicles, and electrifying yellow school buses and Postal Service trucks. The plan also calls for a range of federal agencies, including FEMA and the Department of Housing and Urban Development, to ramp up investments that better prepare for extreme weather. The White House says the suite of proposals could include the relocation of some vulnerable communities, offering “transition and relocation assistance to support community-led transitions for the most vulnerable tribal communities.”

None of this should be taken as the single solution to climate change, a crisis that needs far more than electric vehicles and more clean energy. It doesn’t address the full scope of challenges, like what to do about existing oil and gas operations and how to mitigate Wall Street and the federal government’s continued support for oil extraction. As massive as the $2 trillion package is, the individual investments (still up to a divided Congress to hammer out) won’t be enough.

Many of those climate measures also take aim at environmental injustices that have disproportionately affected Black and Brown Americans. Forty percent of the climate and clean energy investments target disadvantaged communities. They include eliminating all remaining lead pipes from the country’s water system and shoring up infrastructure in communities most physically and financially vulnerable to climate-driven disasters, areas where Americans of color are more likely to live.

Biden’s proposed $85 billion to modernize public transit is also directed at Americans of color, who are twice as likely to use public transit as white Americans. The housing components of Biden’s plan would make progress on reducing the racial wealth gap, which persists in large part because of historical measures that have made it difficult for Black Americans to own homes and build wealth. Biden’s plan aims to eliminate exclusionary zoning measures, such as minimum lot sizes and bans on multifamily housing, and set aside $20 billion set aside to rehabilitate half a million homes for low- and middle-income buyers.

The Democratic Party’s left flank has argued that the $2 trillion plan doesn’t spend nearly enough to address the crises the country faces.

The coronavirus pandemic has amounted to a crisis for working women, who have lost nearly 1 million more jobs than men during the pandemic-induced recession. Those who are still employed have struggled to shoulder much of their families’ burden of caring for children, as well as disabled or elderly family members. The White House’s plan would invest $400 billion in the “care economy,” the work of caring for elderly and disabled Americans. It would expand access to affordable long-term care, thus easing the burden on women who are doing this work for family members for free. It also promises to increase the pay of caregiving work, 90 percent of which is performed by women. Wages for this sector are roughly $12 an hour, and one in six workers live in poverty.

But the plan does less to address the child care portion of the caregiving equation. It includes $25 billion to upgrade child care facilities and build child care centers where none exist, as well as establish a tax credit to encourage businesses to add child care facilities to workplaces. But there is nothing in the plan that makes similar job-enhancing promises to child care workers, who make similarly low wages and are often women. The proposal also nods to the need for workforce protections, but there is nothing specifically aimed at closing existing gender wage gaps or pay discrimination.

Some of those outstanding concerns might be addressed in the second half of the president’s jobs plan, which is expected to be unveiled next month. That package is likely to focus on “human infrastructure,” including more child care incentives, paid family and medical leave, and a health care expansion, according to the Washington Post. The White House has indicated that the timing of the proposals is not indicative of how they’re being prioritized.

But exactly how any of these promises come together is to be determined. A senior White House official told reporters on Tuesday night that Biden’s proposal is the “beginning of a conversation with Congress and the American people.” Many details on precisely how these ideas could become reality have been left intentionally vague in order to give lawmakers the opportunity to negotiate the specifics. The fault lines over those negotiations have already hardened. The Democratic Party’s left flank has argued that the $2 trillion plan doesn’t spend nearly enough to address the crises the country faces. Rep. Pramila Jayapal (D-Wash.), chair of the Congressional Progressive Caucus, said the package “should be substantially larger,” noting Biden had committed to $2 trillion in climate investment alone as a candidate. Republicans, meanwhile, oppose both massive spending and the taxes on corporations the White House has proposed to pay for its plan.

Democrats will face pressure from climate and racial justice advocates to meet the unprecedented, intertwined crises the country faces. “We can’t wait to invest in the Black, brown and Indigenous communities hit the hardest by these crises, and we can’t wait until the next climate disaster tears our lives apart,” Working Families Party National Director Maurice Mitchell said in a statement. “Millions of us are depending on Congress to take this once-in-a-generation opportunity and deliver the jobs, care and justice we so urgently need, and we intend to make them deliver.”