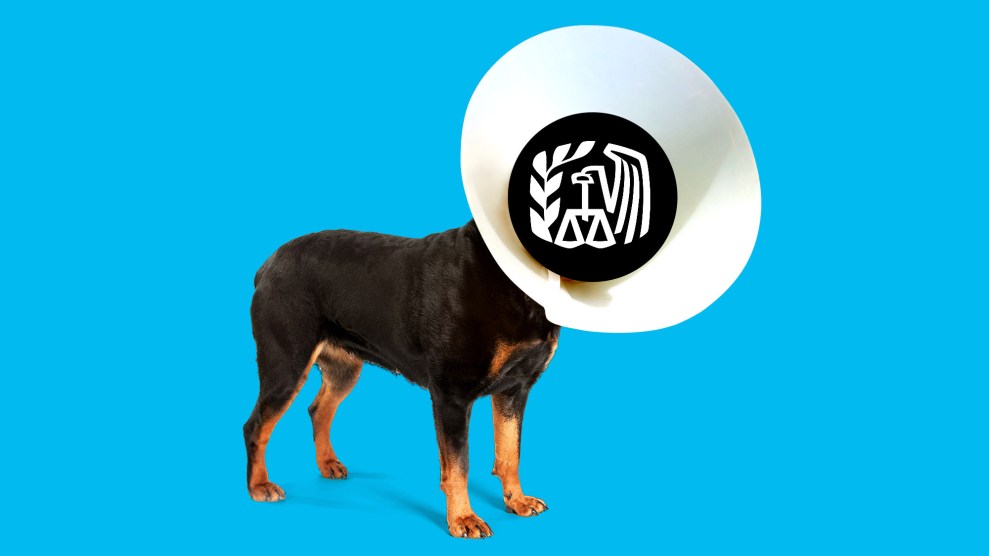 Taxpayers and politicians are forever complaining about rich people taking advantage of “loopholes” in the tax code, but the IRS, America’s most beloved government agency, doesn’t view things such as carried interest or the special tax treatment of offshore insurers—which hedge funders parlayed into an elaborate tax-avoidance scheme—as loopholes.

The law is the law, an agency spokesman told me recently, and subject to interpretation. If a family or company is audited and found in violation, it can settle up, protest to an IRS appeals board, or take the agency to tax court—a little-known venue where the white-shoe lawyers for America’s dynasties ply their trade. If the well-heeled taxpayer loses their case, they can appeal. If they win, they may well stand to save millions of dollars—or billions. And often they win.

That’s assuming they are audited in the first place. President Joe Biden is prepared to announce that his administration will seek $80 billion to beef up IRS audits of high earners—a necessary move given that the water carriers for the dynasties have done their utmost to make such audits exceedingly rare. The Republican Party has waged open warfare on the IRS since at least 1994, chipping away at its resources and enforcement abilities even as mainstream Republican lawmakers and candidates called for the agency’s abolition.

Administration officials estimate that a 10-year, $80 billion investment in IRS enforcement could yield $700 billion for the Treasury. And indeed, there’s a lot of catching up to do when it comes to the superrich. By the end of the Bush years, the IRS was auditing fewer than 1 in 10 taxpayers with adjusted gross incomes of $10 million–plus, and just 1 in 15 with incomes from $5 million to $10 million.

Even as the IRS received 9 percent more tax returns, its budget was slashed by $2.9 billion—costing the agency more than one-fifth of its workforce.

These high-end audit rates increased substantially under President Barack Obama, but congressional Republicans, embittered by the passage of the Affordable Care Act and the surcharges it imposed on the wealthiest 1 percent, hit back hard. After regaining the House in 2010, they systematically eviscerated the IRS budget and launched a series of dog-and-pony-show hearings based on claims that the agency was unfairly targeting conservative nonprofits, though it later turned out the IRS was also scrutinizing liberal ones.

During a contentious 2015 hearing highlighted in a must-read piece by ProPublica, Representative Mike Kelly, a Pennsylvania Republican, laid into John Koskinen, Obama’s feisty IRS commissioner. Koskinen, in a recent speech, had griped that his overworked employees would have to “do less with less,” and referred to the assault on his budget as “a tax cut for tax cheats.”

“What in the world were you thinking of?” Kelly demanded. Such talk could crush worker morale and encourage tax evasion, he said. Koskinen countered that the cuts had indeed crippled his agency’s ability to enforce the law, and now he was worried his congressional foes were about to make the situation worse. “I don’t want you saying later on, you know, you should have told us about this, that it is serious,” he told the senators. “It is serious.”

Koskinen’s warnings were ignored, and the cuts continued. From 2010 to 2018, even as the IRS received 9 percent more tax returns, its budget was slashed by $2.9 billion—a 20 percent reduction that cost the agency more than one-fifth of its workforce. Investigations of non-filers plummeted and the amount of outstanding tax debt the IRS formally wrote off (based on the 10-year statute of limitations for collections) more than doubled—from less than $15 billion in 2010 to more than $34 billion in 2019.

Nearly 880,000 high income non-filers still owed $46 billion, noted a 2020 Treasury report, and the IRS was in no condition to collect.

Most notably, the bloodbath resulted in an exodus of experienced auditors, people with the expertise required to decode the financial voodoo of the wealthiest taxpayers and their deliberately opaque partnerships. It can “take months to identify the person who represents the partnership,” IRS auditors told the Government Accountability Office in 2014.

Virtually no partnerships were audited in 2018. By then, with Donald Trump in the Oval Office, the kneecapped IRS was scrutinizing the individual returns of just 0.03 percent of those $10 million–plus taxpayers, down from a peak of 23 percent in 2010. Audits of the $5 million–to–$10 million filers fell from just under 15 percent to a scant 0.04 percent.

A fair subset of superwealthy Americans doesn’t even bother filing. The Treasury Department’s Inspector General for Tax Administration reported in 2020 that nearly 880,000 “high income” non-filers from 2014 through 2016 still owed $46 billion, and the IRS was in no condition, resource-wise, to collect. The 300 biggest delinquents owed about $33 million per head, on average. Fifteen percent of their cases had been closed without examination by IRS staffers, and another one-third weren’t even in line to be “worked.”

The dynasties, in short, were safe. But now, with a new sheriff in town, it seems they’ll have to watch their backs.

The above was adapted from senior editor Michael Mechanic’s new book, Jackpot: How the Super-Rich Really Live—and How Their Wealth Harms Us All. (April 2021, Simon & Schuster, all rights reserved)