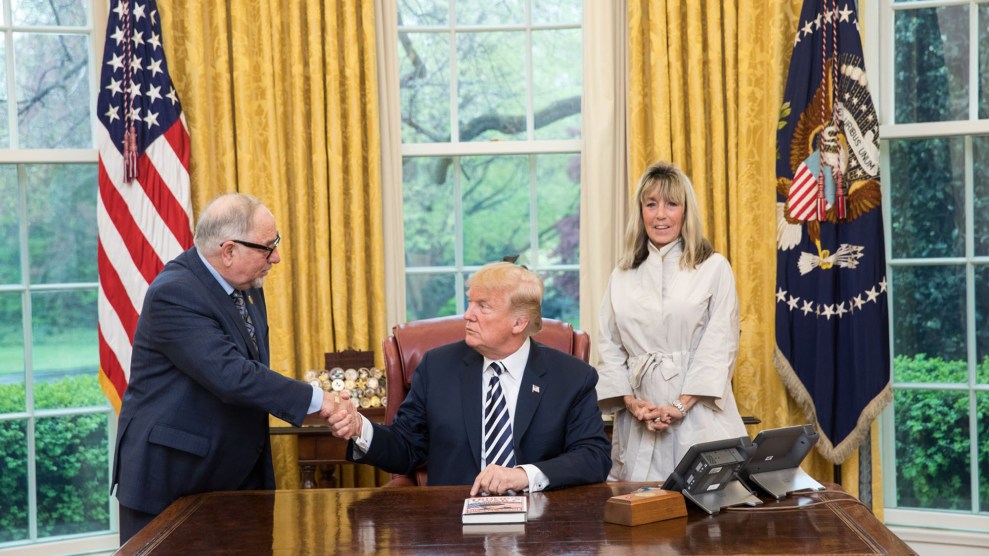 During his time in the White House, Donald Trump rewarded many of his loyalists with plum jobs. One of the most egregious of those appointments was radio host Michael Savage, whom Trump put on the board of the Presidio Trust. My former colleague Dave Gilson got hold via FOIA of a trove of emails from Savage’s time on the board of the trust, which runs a 1,200-acre park near the Golden Gate Bridge. The emails detail how the shock jock, sputtering and bombastic as always, used his position to try to downplay the park’s role in the incarceration of Japanese Americans during World War II, and to push other right-wing causes. As Dave put it, “Savage’s first months as a Presidio Trust board member were marked by prickly outbursts, culminating in a sudden push to inject his toxic politics into park business.”

But a year into his appointment Savage may be out of a job. On Thursday afternoon, Newsmax reported that Savage had received a letter that morning informing him that President Joe Biden was requesting his resignation; if Savage did not resign, he would be fired by the end of the work day. (Breitbart also reported it had seen the letter. The White House did not respond to repeated requests for comment from Mother Jones.)

According to Newsmax, the letter to Savage (real name Michael Weiner) came from Catherine Russell, the director of the White House Office of Presidential Personnel Director, and read: “Dear Mr. Weiner, On behalf of President Biden, I am writing to request your resignation as a Member of the Presidio Trust, Board of Directors. Please submit your resignation to me by the close of business today. Should we not receive your resignation, your position with the Board will be terminated effective 6:00PM today. Thank you.”

“This is clearly a purge by the Biden team,” Savage told the conservative news outlet, also stating, “I will not be forced to resign!” He later appeared on Newsmax TV claiming that the board is “the equivalent, in a way, of the Supreme Court, a president can appoint us but a president cannot fire us.” Savage claimed his lawyer disputed the president’s authority to fire him, and that he planned to file a lawsuit if Biden follows through. When asked why Biden might want to kick him off, Savage mused that the president wanted to turn it into “Woodstock West” and erase the park’s military history. “They’ll turn it into a Black Lives Matter plaza,” the Newsmax host quipped in response. “Oh don’t say that,” Savage responded. Savage ended the segment by holding up a copy of Mao’s Little Red Book. “This is starting to look more and more like the purges of China under Mao Zedong.”

As of Friday, it’s unclear if the Biden administration had followed through on terminating Savage’s position. But as Dave’s story from last month revealed, they’d have plenty of reason to object to him remaining on the job. Savage made his career as a conservative commentator willing to spew racist and homophobic hate, and styled himself the “Godfather of Trumpmania.” He claims Trump personally called him to offer the spot on the Presidio Board, a job that often goes to connected political donors of each party. Those board members must have “extensive knowledge and experience in one or more of the fields of city planning, finance, real estate development, and resource conservation.” Savage presumably got there based on that last category, albeit with somewhat dubious qualifications. The FOIAs from Savage’s early days on the board didn’t paint a pretty picture:

Prompted for details on what he would like to do with his new role, Savage, who has no military experience, emailed back that he hoped to see “a new inclusion of the Presidio’s proud military heritage” and wanted to use his botanical knowledge to create “a native American medicinal plant garden.” Asked for examples of his personal ties to the park to include in a press release, he suggested quoting his 2012 action novel Abuse of Power, in which the former base is a backdrop for a high-speed chase along roads named “for military commanders who knew how to defeat the enemy, not placate the media and foreign lobbyists.”

He said it was “offensive” that he had to undergo an ethics review required of all board members, and when asked to fill out a mandatory, non-public financial disclosure form he threatened the Presidio’s staff that he was “in touch with the White House about this intrusive inquisition.” When he attended his first public forum over Zoom last July, one resident of the Presidio questioned him about the Southern Poverty Law Center’s claim that he “subscribes to the white genocide conspiracy theory.” Afterward Savage erupted in private emails to fellow board members and Presidio staff, writing, “WHO PERMITTED THE LAST SPEAKER TO ATTACK ME? HOW DID SHE GET ON THE LIST OF ‘APPROVED SPEAKERS’?” When the trust’s CEO reminded Savage that as a government entity they could not restrict the speech of citizens at meetings thanks to the First Amendment, Savage wrote back, ““Yes, I am aware of the ‘law’. Do not appreciate your lecture. Not what I asked. How did this hateful person get to be chosen?”

Outside of internal office culture, Savage’s most noteworthy contribution during his time on the board has been his effort to whitewash the Presidio’s role in internment. “You would think that the military heritage museum would show us the greatness of the US Army at the Presidio, but it doesn’t,” he complained on his radio show last December. “Instead, it shows us big things about the Japanese internment.” He’d already been pushing a similar argument in emails behind-the-scenes. “Now that we are looking more closely at the Heritage exhibit, I want to discuss the INCLUSION OF THE DEFEAT OF HITLER! There is far too much emphasis on the JAPANESE INTERNMENT,” he wrote. (Given its location, the museum has traditionally focused on the Pacific aspects of the war, rather than Europe.) “We must insist this exhibit display the DEFEAT OF HITLER’S ‘SUPERMEN’ by AMERICA’S EVERYMAN. And, while we are at it, we must emphasize that it was Franklin Roosevelt, a far left LIBERAL, who interred the Japanese. We must insist on HISTORICAL truths.”

The act that established the Presidio Trust in the 1990s spells out how a president can appoint a board member, but makes no mention of removing an officer, so it’s unclear if Savage’s legal interpretation that he can’t be fired is correct. When reached for comment on Thursday, the Presidio did not respond to questions about Savage’s status on the board. It did offer a largely boilerplate comment that hints that the trust believes a president can remove board members, saying, in part, “Our Board members serve at the pleasure of the President.”

Read the full investigation into Savage’s role at the Presidio here.