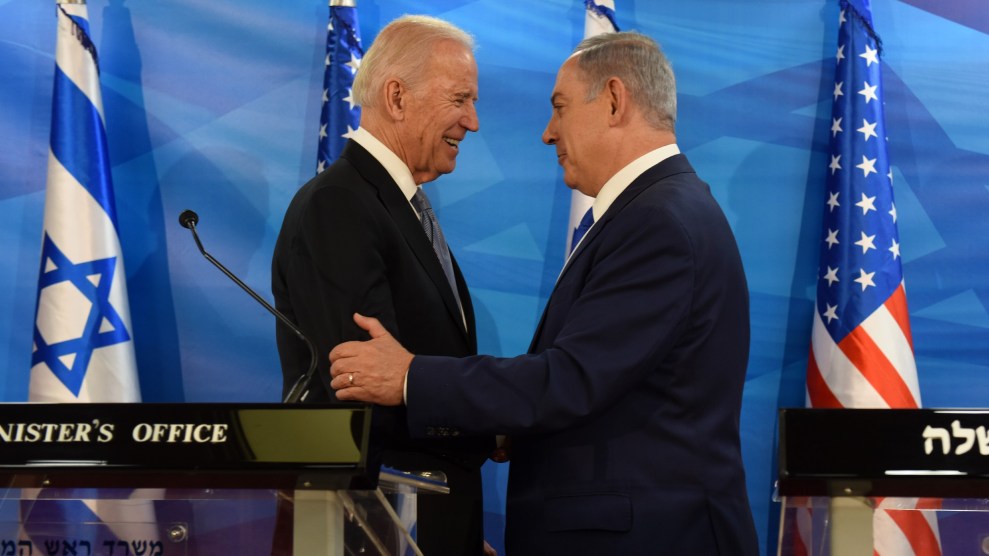 Progressive activists were surprised when the Democratic Party platform was approved last August. The party’s policy planks were largely crafted based on recommendations from Joe Biden and Bernie Sanders’ “unity” task forces, and the Bernie wing was confident they had secured an unprecedented addition. For the first time the party was set to “assert that Palestinians had a right to live free of foreign ‘occupation,'” Foreign Policy reported at the time. But then Biden personally weighed in, according to the magazine’s reporting, and ordered his team “not to include any reference to Israeli ‘occupation.'”

Foreign policy was never a major component of the 2020 Democratic campaign, but underneath the surface there were simmering tensions between Biden and the more progressive wing of his party. Of the six policy areas tackled by Biden and Sanders’ task forces—including topics like immigration and climate change—foreign policy was conspicuously absent.

Through private conference calls, Biden’s advisers courted support from the party’s antiwar caucus and even heeded advice from progressives to tone down the rhetoric in a campaign ad about China. But no amount of dialogue could smooth out the friction over Israel, which exploded into public view this past week as Israel clashed with Hamas, the militant Palestinian organization, in a days-long fight that has left at least 230 Palestinians and 12 Israelis dead.

During the initial outburst of violence, Biden and his officials were reluctant to criticize Israel even after its rockets killed scores of civilians, including more than 60 children, in Gaza, the densely-populated region to Israel’s west that is ruled by Hamas. Palestinian militants have launched hundreds of rockets at Israeli cities, but the country’s Iron Dome defense system—funded mostly by the Obama administration—has spared Israel the bulk of the casualties while in Gaza, more than 150 buildings, including nearly 700 housing units, have been destroyed, according to a UN assessment said.

The violence in Gaza, part of a deadly, seemingly-endless cycle of hostility between Palestinians and the Israeli government, has made clear that foreign policy is where Biden remains most out of step with the loudest voices in the progressive base. His initially tentative response to the fighting and reluctance to call for a ceasefire until days of criticism poured in has soured progressives on the future of this White House’s foreign policy and all but ruptured the existing relationship between the two sides.

In February 2020, Biden made what in the past had been a usual stop for Democratic presidential candidates: a speaking slot at the American Israel Public Affairs Committee’s (AIPAC) annual conference. But while the former vice president sent a video message stressing that Israel had the right to defend itself from missiles launched from Gaza, some of his rivals chose a different path. Elizabeth Warren skipped the conference and Bernie Sanders went a step further, tweeting that he was “concerned about the platform AIPAC provides for leaders who express bigotry and oppose basic Palestinian rights.”

Five years ago when Biden was last working from the White House as VP, Democrats aligning with AIPAC was a given. But once Donald Trump took power, the party’s newly-emboldened progressive wing grew more comfortable openly supporting Palestinians and harshly criticizing Israel’s approach. Organizations like J Street, a liberal Jewish advocacy group that formed as a liberal alternative to AIPAC, grew more popular with Democratic politicians. Its virtual conference in April featured expected voices like Sanders and Rep. Barbara Lee (D-Calif.), but also many figures from the Democratic establishment, including Speaker of the House Nancy Pelosi, DNC Chair Jaime Harrison, and Biden’s ambassador to the United Nations Linda Thomas-Greenfield.

Even Biden was a frequent speaker at J Street’s conferences in the Obama years. His steadfast support for Israel had been a consistent part of his political profile from his earliest time in the Senate, but that stance became a liability among progressives in the Trump era. While in office, Trump cemented the right-wing alliance between Republicans in the United States and Israeli Prime Minister Benjamin Netanyahu’s government. The cracks in Israel’s bipartisan appeal had already shown as early as 2015, when congressional Republicans invited Netanyahu to denounce the Obama administration’s Iran deal in a controversial speech from the Capitol.

Among US activists, the Palestinian cause became increasingly seen in tandem with the Black Lives Matter movement. Last year, the killing of a Palestinian man by an Israeli police officer even drew comparisons from protesters to the murder of George Floyd. “From the USA to Palestine… Racism is a crime,” one sign read at a protest in the West Bank.

Black Lives Matter stands in solidarity with Palestinians. We are a movement committed to ending settler colonialism in all forms and will continue to advocate for Palestinian liberation. ( always have. And always will be ). #freepalestine

In a sign of the new political landscape, a March Gallup poll found that Americans as a whole, particularly Democrats, were warming to the Palestinian cause while souring on Israel. Thirty-eight percent of Democrats expressed more sympathy with the Palestinians, compared to 43 percent whose sympathies were more with Israel. A near-split among Democrats is a marked shift from decades of polling that found Israel rating highly among voters from both parties.

If Biden didn’t feel the ground shifting beneath him by then, he certainly knew last weekend when street protests erupted in cities across the United States and Democrats like Ocasio-Cortez and Tlaib were openly calling Israel an apartheid state. It took until May 19, the tenth day of fighting, for Biden to formally urge Netanyahu to pursue a ceasefire. For progressive activists, that call came far too late and only after days of hand-wringing from Biden aides about the “quiet diplomacy” being done “behind the scenes,” as White House Press Secretary Jen Psaki put it on Monday.

“Of course there is a place for quiet, private diplomacy,” Logan Bayroff, vice president of communications at J Street, told me, but “this hasn’t borne fruit.”

In fact, the approach may have poisoned the White House’s relationship with progressive and Muslim advocacy groups. Yasmine Taeb, a human rights lawyer and progressive foreign policy activist, told me the White House’s earlier statement affirming “strong support for Israel’s right to defend itself against rocket attacks” had “enraged” the activist community. After the release of that statement, she and other groups, including the Council on American–Islamic Relations and American Muslims for Palestine, announced a boycott of the White House’s event to celebrate Eid, the Muslim religious holiday that marks the end of Ramadan.

“It is so completely tone deaf that they are even okay with this happening,” she said.

The strangest thing about Biden’s reluctance to modulate his position on Israel is that early signs pointed to a shift, or at least an evolution, in his administration’s approach.

Biden reversed the Trump administration’s decision to cut funding to the Palestinians and, last month, Secretary of State Antony Blinken told his Israeli counterpart that Palestinians “should enjoy equal measures of freedom, security, prosperity, and democracy.” Outside of government, think tanks and human rights watchdogs were leading the way in calling attention to Israel’s malign treatment of Palestinians and, with Biden in office, these viewpoints had a more attentive audience.

Under Trump, organizations like Human Rights Watch were nearly blacklisted as “anti-Semitic” for pressuring Israel to change its policy toward Palestinians. Biden, who promised to prioritize human rights as part of his foreign policy, would now be recruiting from many of these same organizations when rounding out his administration. The result was a deliberate, if delicate, shift by the left-leaning national security community toward more readily acknowledging the plight of the Palestinian people and the culpability of Israel’s government.

Before appearing in Blinken’s speech, language supporting equal rights for Palestinians appeared in a 2019 Human Rights Watch report and a Center for a New American Security document from December, as Sarah Leah Whitson, executive director of Democracy for the Arab World Now, noted in the American Prospect. Even the RAND Corporation, an entity not prone to finding common cause with AOC, argued in a report earlier this year that the longstanding US financial commitment to Israel’s military was unnecessary. “American support for Israel’s security is likely to remain strong across the political spectrum for strategic, historical, and domestic reasons,,” the report stated, “but Israel is the strongest military power in the region and does not depend on the United States for its security.”

The sea change in Democratic policymaking and activist circles eventually hit the airwaves too. Liberal commentator Mehdi Hasan, who hosts a show on NBC’s Peacock streaming service, called out Israel on May 10, the day violence first broke out in Jerusalem. At a time when State Department spokesperson Ned Price was struggling to tell reporters whether East Jerusalem was “occupied” by Israel, Hasan said, “The fundamental, unavoidable reality at the heart of this conflict is that there is an asymmetry of power here. One side is the occupier. The other side is occupied.” More than a week later, J Street President Jeremy Ben-Ami said on MSNBC that “The United States is not doing everything that it possibly can to stop this.”

Israel long benefited from the Jewish American lobby and support from the defense industry, which have helped make Israel by far the No. 1 recipient of US aid since the end of World War II. But that support is crumbling in Congress. More than two dozen House Democrats signed an open letter calling on the State Department to condemn the possible eviction of roughly 2,000 Palestinians from East Jerusalem, a precursor to the recent violence. Lawmakers spoke at pro-Palestinian rallies and are pushing to deny Israel a $735 million arms sale.

“It’s the first time Congress is actually ahead of the Executive Branch,” Whitson says. “The most progressive members of the Democratic Party are pulling everyone else along.” The only place seemingly immune from the groundswell of pressure is the White House, home to a president who called himself Israel’s “best Catholic friend” four decades ago.

“At the start of the administration, we were cautiously optimistic,” Taeb said, citing the planned withdrawal of US troops from Afghanistan and Biden’s decision to end offensive support for Saudi Arabia’s war in Yemen. But now, Biden has left “the progressive movement fuming.”